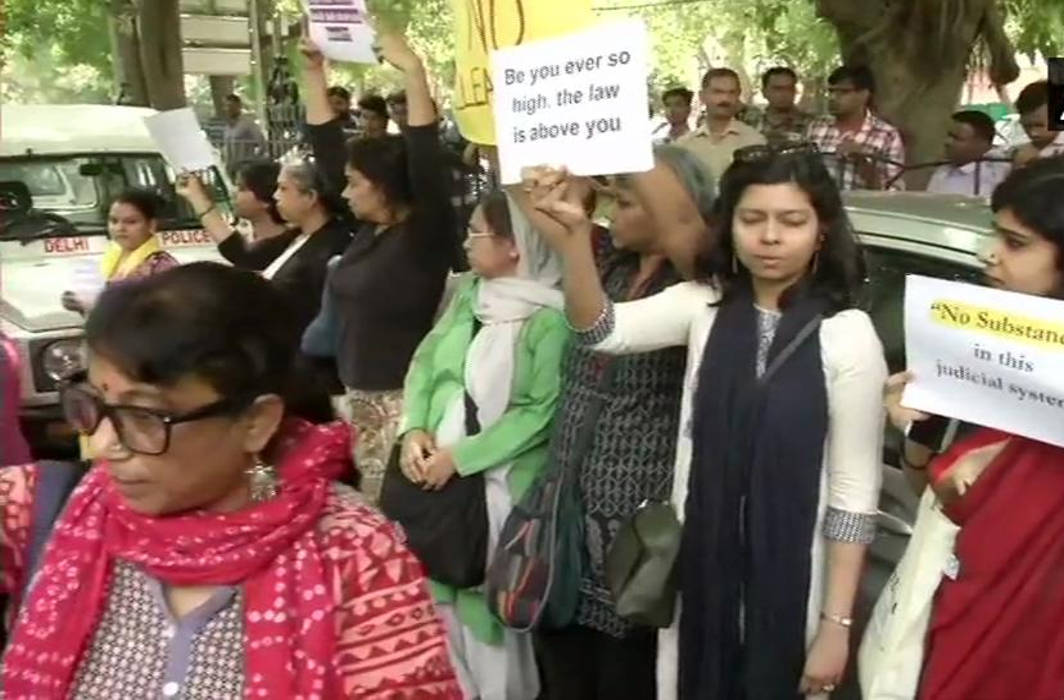 Women lawyers and activists today (Tuesday, May 7) held a protest outside the Supreme Court against the procedure adopted to deal with sexual harassment case against Chief Justice of India (CJI) Ranjan Gogoi.

Section 144 was imposed around the Supreme Court premises and the police who detained the protestors took them away to Mandir Marg police station.

The protests came after the in-house Inquiry Committee of the Supreme Court yesterday gave the CJI a clean chit in an ex parte report which will not be made public, inviting criticism from several quarters over its procedure in dealing with the matter.

The Supreme Court’s In-House Inquiry Committee – led by Justice SA Bobde and the other two being Justice Indira Banerjee and Justice Indu Malhotra – “found no substance” in the allegations of sexual harassment levelled against him by a former woman employee of the apex court.

A statement by the office of Supreme Court Secretary General said the report of the Committee headed by Justice SA Bobde, “is not liable to be made public”.

The protestors, raising doubts about the CJI’s exoneration, said the justice system was in danger. Activist Annie Raja said, “Women have waged a struggle for very long and will continue to do so for their rights. The SC committee has violated all existing norms. We want a transparent enquiry.”

“We want to protect the justice system. If the SC itself is violating norms, then there will be no value in the system left,” she added before being whisked away by the police.

Delhi: Women lawyers and activists today held a protest outside the Supreme Court against the procedure adopted to deal with sexual harassment case against CJI Ranjan Gogoi. Section 144 has been imposed outside SC following the protest. pic.twitter.com/oefGGSCRCJ

The in-house committee wrapped up the inquiry in sittings over four days — three days were devoted to the questioning and recording the statement of the woman complainant who withdrew from the proceedings on the third day, April 30, saying she was being denied access to a lawyer and was “not likely to get justice from this committee”, and the fourth day had the CJI appearing before the panel.

As the woman had opted out of the inquiry, the committee gave the report ex-parte.

In first remarks after the panel concluded they found “no substance” in her allegations, the complainant, in a statement, said “my worst fears have come true” and “am highly disappointed and dejected to learn that the In-House Committee ‘has found no substance’ in my complaint and feel that gross injustice has been done to me as a woman citizen of India. I am now extremely scared and terrified because the In-House Committee, despite having all material placed before them, appears to have given me no justice or protection and said nothing about the absolutely malafide dismissals and suspensions, indignities and humiliations suffered by me and my family. I and my family members remain vulnerable to the ongoing reprisals and attack.”

Soon after the report on the allegations was first published, a bench led by CJI Gogoi had put out an order signed by two other judges saying this was part of a “conspiracy”.

Subsequently, on an affidavit filed by advocate Utsav Bains, who had claimed there was a conspiracy by ‘fixers and disgruntled employees’ of the top court to “frame the CJI in a false case of sexual harassment,” a bench appointed retired Justice AK Patnaik to conduct an inquiry into the alleged conspiracy, assisted by the CBI Director, Director of Intelligence Bureau and Commissioner of Police (Delhi).

Bains has claimed that he was offered money to take up the case of a former junior court assistant, who has levelled sexual harassment allegations against the CJI, and to organise a press conference to make the matter public.

As for the report of the in-house committee, India Legal said quoting sources that though Justice NV Ramana was the judge next in seniority after Justice Bobde, the report was not submitted to him as he was originally the member of the panel but had to recuse himself after the woman had expressed some reservations over his presence in the panel.

The source told India Legal that Justice Arun Mishra, who is number four in seniority, is competent to receive the report. After CJI Ranjan Gogoi, Justice Bobde is the senior-most judge followed by Justices Ramana, Mishra and RF Nariman.

The three-member panel was constituted on April 23, 2019 in which the original members were Justices Bobde, Ramana and Banerjee. However, on April 25, Justice Ramana had to recuse himself after the woman expressed her reservations over his inclusion on the ground that he is a close friend of the CJI and a regular visitor to his house.