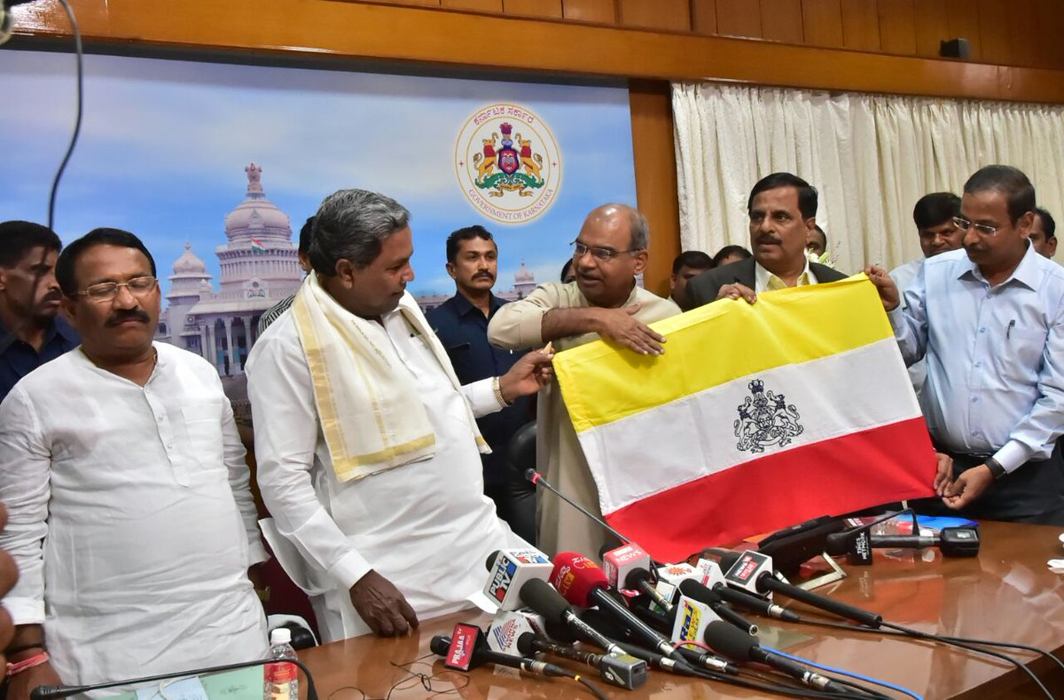 With Lok Sabha polls a few months away, enterprising Karnataka politicians are trying to create political capital by throwing their weight behind pro-Kannada causes while whipping up anti-Hindi sentiments in the state capital and elsewhere

By Stephen David in Bengaluru

IT ALL began with defacing of Hindi signs at the Bengaluru Metro, India’s third longest operational rail transit network, sometime in June 2017. Although the Metro is a joint venture of both the state and the Centre, pro-Kannada outfits with the backing of the then chief minister Siddaramaiah deemed it fit to demonstrate their anger at what they viewed as Hindi opposition in the state. The protests were not as bad as they were in Tamil Nadu a few decades ago where the local movements didn’t want any semblance of Hindi there.

Siddaramaiah, now chairman of the coordination committee, is back at his pro-Kannada loud chorus again: This time, firing on all cylinders, at the chief minister HD Kumaraswamy’s green signal for English as a medium of instruction in 1,000 government schools beginning from the coming academic year. Kumaraswamy, heading the nine-month long JDS-Congress coalition government, defends his decision to bat for English because he feels it will give an advantage to the government school students to get jobs and interact with confidence in an increasingly globalised work place environment.

With cities like Bengaluru, Mysore and Mangalore seeing a rush of companies in the information technology [IT] and information technology enabled services [ITES] sector, more job opportunities will open for those who have an English-speaking edge. More than a million workers eke out their living thanks to these companies where English is the lingua franca. And a sizeable number of them are from out of Karnataka because of the huge gap in the skill levels. Kumaraswamy wants to plug this gap by thinking global while acting local. But his detractors like Siddaramaiah are out to spoil that thinking by vehemently bringing up the Kannada card, hoping it will translate into votes for his party or create momentum for their own political careers.

Karnataka has been India’s top software exports state – more than 2,000 IT firms and nearly 50 dedicated export zones – for a number of years, being home to behemoths like Infosys, Wipro, Flipkart apart from several marquee MNCs names like IBM, Dell, GE or SAP to name a few. Almost 80 per cent of global IT majors have their India operations in Bengaluru, the fourth largest technology cluster in the world after Silicon Valley, Boston, and London.

“Bengaluru itself is a cosmopolitan city, and we must be open to having all languages promoted here,” says one IT major senior executive who is from outside the state. “We don’t feel like outsiders here, we feel at home.” There are some fringe pro-Kannada outfits who have caused some distress to those who don’t speak the local language. This has been a major cause of pain to foreign students in certain pockets in the state.

Coming to the Bengaluru Metro Hindi signage defacing by pro-Kannada outfits, the move helped Siddaramaiah get some traction at that time. Although the Metro rail – coaches as well as the stations – displayed signs in Hindi, English and Kannada, there is no Hindi today thanks to the blitzkrieg launched by Kannada groups, online and offline. For some, Hindi was seen as an imposition. It was compared to the Centre trying to foist their language on south India. For commuters, especially from those out of the state who don’t know English or Kannada, chances are they will miss the bus – or train, for that matter.

India’s Vice President Venkaiah Naidu, whose mother tongue is Telugu, called Hindi as the national language at a function in Gujarat. “Hindi is our national language, our identity and we should be proud of it and not be obsessed with English,” he had said. While the Indian Constitution does not identify any language as ‘national’, Article 343 says that Hindi and English enjoy the status of official languages.

Whether the Centre is promoting or imposing Hindi is now in the realm of verbal gymnastics but what is sad is that Karnataka has become the battle zone for language politics.

Now with the Lok Sabha 2019 elections nearing, stoking the Kannada language issue has the potential to reap rich political rewards.  Siddaramaiah made Kannada pride a poll plank. He had proposed a Karnataka state flag apart from successfully batting to black off Hindi signage at Bengaluru metro stations.

Anti-Hindi Twitter campaigns like  #NammaMetroHindiBeda (‘Our Metro, We don’t want Hindi’) only added to the fervor by some people who removed Hindi words on the signboards of two Metro stations. The Kannada Development Authority [KDA], whose chief is also named Siddaramaiah, had also issued notice to the Bangalore Metro Rail Corporation Ltd (BMRCL) and sought an explanation why it was using three-language policy.This was akin to DMK acting president MK Stalin threating to launch an anti-Hindi agitation after milestones marked in Hindi were seen on Tamil Nadu highways.

the Karnataka Shops and Establishments Act, Department of Personnel and Administrative Reforms (DPAR) Services, and directives of the Union Home Ministry.

KDA chairman SG Siddaramaiah termed use of Hindi in Bengaluru Metro was “unnecessary imposition of Hindi” as he argued that it was like any other state government transport corporation owned by the state Government although it was using Central funds and hence had to follow only a two-language policy – Kannada and English.

Earlier this month, while delivering the valedictory speech at the 84th Akhila Bharata Kannada Sahitya Sammelana in Dharwad – home of several Jnanpith awardees like Girish Karnad – Siddaramaiah said the opinion of the majority of Kannadigas was in favour of imparting primary education [up to class 7] in Kannada. The Congress strongman said: “English is just a language. It cannot become a medium to gain knowledge, which can be easily acquired through the mother tongue.”

Enthused by his pro-Kannada works in the past, pressure is on for Kumaraswamy to withdraw the notification issued on introducing English as the medium of instruction in 1,000 government primary schools.

Jnanapith awardee Chandrashekar Kambar even invoked the example of Thomas Babington Macaulay, on whose suggestion English had become the administrative language in British-ruled India. For Kambar, Kannada is what is required for daily business and cultural development.  Some pro-Kannada groups, who protest against Tamil or Hindi films sometimes, go to ridiculous lengths to press for their demands: one group demanded former adult star Sunny Leone sing in Kannada while she was hired for a Bangalore music show.

In December 2017, Bengaluru police capitulated to the demands of pro-Kannada groups that went on a protest against adult star and Bollywood queen Sunny Leone’s New Year event in the state capital. Although it was a private event at a private venue near the Manyata tech park for a ticketed audience, the city cops decided to not accord permission. This was despite the court giving directions to the city police to maintain law and order. The Home Minister at that time conveniently passed on the buck to the police chief’s discretion while it was clear that the government of the day was in cahoots with some pro-Kannada group’s demands.

But a year later, the police deployed more than 200 personnel to guard Sunny for a similar event in the city that went off peacefully. The police threw a heavy security blanket for the performance to go without a hitch but the threat of pro-Kannada outfits throwing a spanner in the works was always there.

Although Kumaraswamy and Siddaramaiah are pitted on two sides of the language war, Kumaraswamy has refused to back down on his policy to back English in government schools from the coming academic year. “I am as pro-Kannada and pro-development,” he says, “and there is no politics here.”

While the primary and secondary education department is already gearing up to train its teachers from the Regional Institute of English there is no let up by political groups who are hoping to make political capital of the language wars.