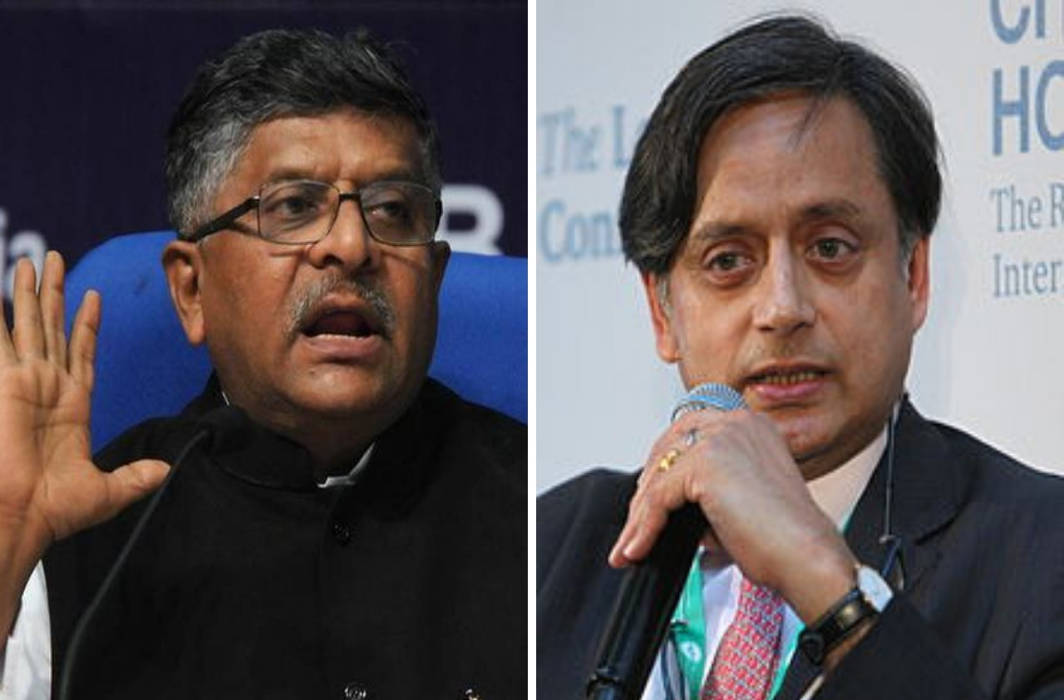 Over a month ago, Tharoor had sent a legal notice to Prasad seeking his “unconditional apology” for his remarks in connection with Sunanda Pushkar’s death.

Prasad, speaking to media, had said: “Tharoor who is accused in a murder case has attempted to disrespect Lord Shiva”.

He was hitting out after Tharoor quoted an unnamed RSS source as saying that Prime Minister Narendra Modi was like a “scorpion sitting on a Shivling who cannot be removed by hand or hit with a chappal (slipper)”.

The law minister shared a video of the press conference on Twitter, captioning it, “Shashi Tharoor who is accused in a murder case has attempted to disrespect Lord Shiva. I seek a reply from Rahul Gandhi who claims himself to be a Bhakt of Lord Shiva on this horrific denunciation of Hindu gods by a Congress MP. Rahul Gandhi must apologize to all Hindus.”

Accusing Prasad of intentionally harming and destroying his reputation, Tharoor, Lok Sabha MP from Thiruvananthapuram, asked the Law Minister to tender an unconditional and written apology within 48 hours of the receipt of the notice. He also asked him to delete the clip of his press conference where he made the remarks against him along with the “false, untrue and highly defamatory statements on Twitter”.

Prasad, however, refused to apologise saying “there arises no question of any apology or deleting of the tweet”.

On his remark that Tharoor is an “accused in a murder”, Prasad’s lawyer said, “..the trial in case of death of Sunanda Pushkar is ongoing and one cannot predict the outcome of the trial. Therefore, your allegation that my client allegedly defamed your client by posting the tweet. It is stated that your client was and is accused in relation to death of Pushkar.”

Meanwhile, reported The Indian Express (IE), television news anchor and Republic TV editor-in-chief Arnab Goswami has been summoned to appear before a Kerala trial court in a criminal defamation case filed by Tharoor. Tharoor alleged that Goswami had made defamatory statements against him during a Republic TV program on Sunanda Pushkar’s death.

The program alleged that Pushkar was murdered and that Tharoor had a role in it. The hearing is scheduled for February 28, 2019. A civil defamation case against Goswami, claiming compensation to the tune of Rs 2 crore, is pending before the Delhi High Court.

Sunanda Pushkar was found dead in a luxury hotel suite in Delhi on the night of January 17, 2014. The couple was staying in the hotel as Shashi Tharoor’s official bungalow was being renovated at that time. Shashi Tharoor has been charged under sections 498A (husband or his relative subjecting a woman to cruelty) and 306 (abetment of suicide) of the Indian Penal Code (IPC), but has not been arrested in the case.[/vc_column_text][/vc_column][/vc_row]