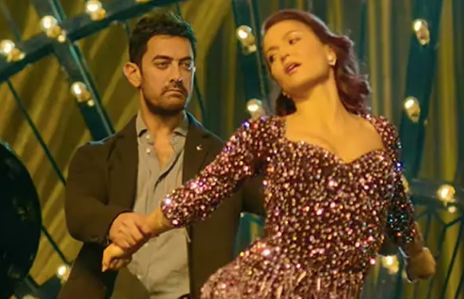 The most awaited song titled Har Funn Maula starring Aamir Khan and Elli AvrRam, has finally released on Wednesday, and it is everything that fans would have wished for.

For the first time Aamir has collaborated with Elli for a cabaret number in which the two set stage on fire with their sizzling chemistry. In the song, Aamir sporting a chilled casual look can be seen grooving with Elli who looks gorgeous in a sequined dress.

The special song features in the upcoming film Koi Jaane Na, which is Aamir’s friend Amin Hajee directorial debut movie. Sharing the song on Twitter, Aamir wrote a note, thanking Hajee with whom he has worked together in films like Lagaan and Mangal Pandey: The Rising, and team Koi Jaane Na for a memorable experience.

He wrote, Amin, my friend, you have come a long way since Lagaan. Wishing Bhushan, T-Series and you, all the very best for Koi Jaane Na! Really enjoyed shooting for this song. What an awesome team you have. Ceaser, Bosco, Manoj, Dipankar, Avan, Nanao, Rushi, Manoshi, Ballu, Adele, Tanishk, Vishaal, Zara and above all Elli, who hides all the flaws in my dancing…Hope you all like the song, guys! This film is exciting (hopefully! Amin don’t let us down) suspense thriller Koi Jaane Na and is due for release in theatres on April 2.

Much before its release, the new track started featuring in headlines as fans were eagerly waiting to see the superstar on screen after 2018 film Thugs of Hindostan. Earlier, the makers had shared the first look with the caption saying, Funn is just around the corner! A glimpse of #HarFunnMaula from #KoiJaaneNaMovie. Dropping on 10th March.

Meanwhile,  Koi Jaane Na stars Kunal Kapur and Amyra Dastur in lead roles. The film is touted to be a psychological thriller which has been produced by Bhushan Kumar’s T-Series and Amin Hajee Film Company. It is slated to release on April 2.