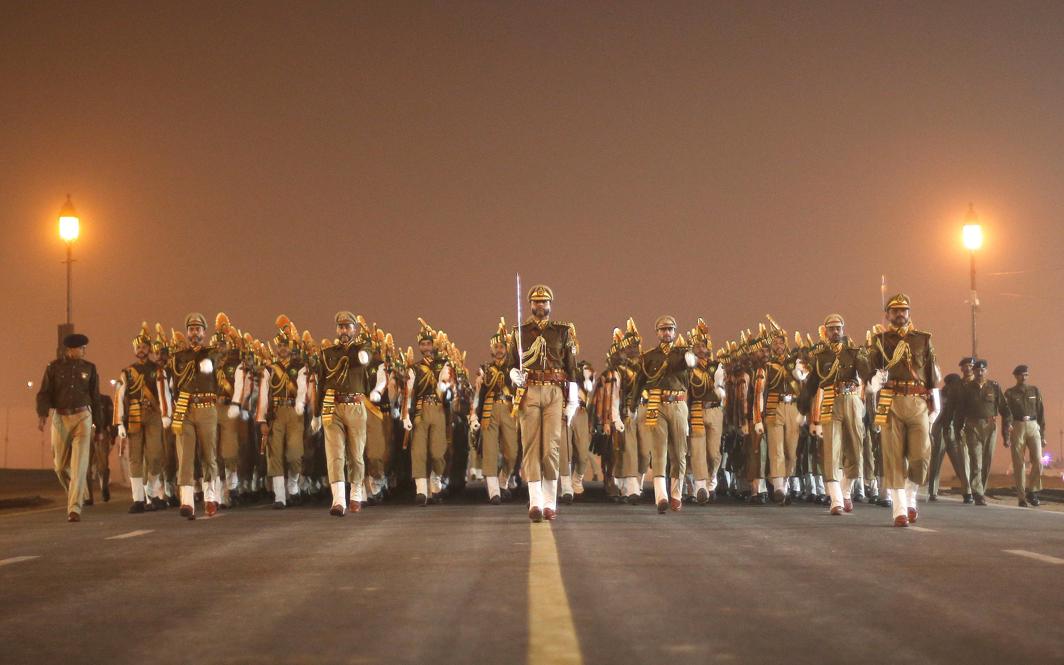 Preparations are in full swing to celebrate India’s 71st Republic Day parade this Sunday at the India Gate, New Delhi. The day is celebrated with great pomp and show as a celebration of India’s diversity.

The vibrant parade will involve different tableau representing various Indian states and their culture in a colourful way. The regiments of the Indian Defence Forces – the Army, the Air Force, and the Navy will also march to the iconic India Gate, where they will showcase their military power and strength.

This Republic Day celebration will be the first where the Chief of Defence staff will welcome the Prime Minister along with the Chiefs of the three defense forces – Army Chief Gen M M Naravane, Air Chief Marshal RKS Bhadauria and Navy Chief Admiral Karambir Singh. Former Army chief, Gen. Bipin Rawat on January 1 had taken charge as the country’s first Chief of Defence Staff.

Who is the Chief Guest?

Brazilian President Jair Bolsonaro will be the chief guest for this year’s Republic Day celebrations. He won the country’s presidential elections in 2018 after running on a far-right platform. Bolsonaro’s politics has been branded as “homophobic”, “misogynistic” and “radical”.

Bolsonaro, a retired army officer, entered politics in 1988 as he was elected as the city councilor in Rio de Janeiro, representing the Christian Democratic Party(CDP). He has been a vocal opponent of same sex-marriage, environmental regulations, abortion and affirmative action (particularly racial quotas).

According to Brazil’s National Institute for Space Research (Instituto Nacional de Pesquisas Espaciais),  destruction of the Amazon rain forest increased by 88% for the month of June 2019, during Bolsonaro’s first year as president. He has been criticized by environmentalists worldwide for not providing sufficient aid during the 2019 Brazil wildfire.

Walled city of Jaipur, Step-well of Patan as tableau

Sixteen states and Union Territories and Six Central Ministries will participate in the Republic Day Parade this year at Rajpath in New Delhi.

Start-up India, Jal Jeevan Mission and Financial Inclusion are some of the themes of the tableaux of Ministries and Departments.

The Walled City of Jaipur and Gujarat’s iconic step-well in Patan and the 550th Anniversary of Sikhism Founder Guru Nanak Dev will be thematically showcased among the host of tableaux in the Republic Day function.

Many tableaux were rejected this year. These states are Haryana, Uttarakhand, Tripura, Arunachal Pradesh, West Bengal, Maharashtra, Bihar and Kerala. This move has been heavily criticized by the opposition. Congress leader Abhishekh Manu Singhvi said that India’s diversity, heritage, cultural soft power and essence cannot be done justice after exclusion of these massive states, in terms of area and population.

This year the parade will also feature the country’s Border Security Force, the “Daredevils” motorcycle stunt team, Sikh Light Infantry, the Grenadiers, and the Parachute Regiment, which will make a comeback after a gap of four years.

The Dhanush guns, known as the ‘desi’ Bofors, will be the star attraction of the Army contingent at the parade.

Indian Air  Force’s new Apache attack and Chinook heavy-lift helicopters will also be participating in a fly-by for the first time.

Captain Tania Shergill, a fourth generation Army officer, will be the parade’s first female adjutant. Shergill, who will be leading the Corps of Signals contingent, was also the first women ever to have led a contingent on the Army Day.

In light of the recent Citizenship (Amendment) Act protests, multi-layered security arrangements have been made for this year’s celebration. Officials have imposed restrictions on wearing black caps or scarves during Republic Day celebrations.

25,000 police personnel have been deployed to keep a watch on the route from Rajpath to the Red Fort.

Metro operations will also be affected as Delhi Metro Rail Corporation(DMRC) issued a statement saying that the gates of Central Secretariat & Udyog Bhawan remain closed up to 12:00 pm, Lok Kalyan Marg & Patel Chowk shall be closed from 8:45 am to 12:00 pm on 26 January.