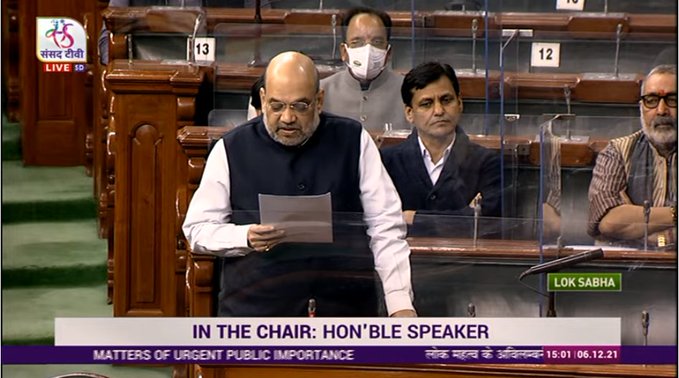 Union Home Minister Amit Shah on December 6 in Lok Sabha addressed the matter of civilian killings in Nagaland that took place on December 4 in the Mon district. HE said that army received information on the movements of extremists and mistakenly fired upon civilians.

The former Chief Minister of Punjab, Captain Amarinder Singh has now joined hands with BJP and is set to contest the election in alliance with BJP. He recently launched his party named Punjab Lok Congress. Apart from this, Singh also inaugurated his party office in Chandigarh.

In the latest update in the Bhima-Koregaon case, NIA has opposed bail to activist Sudha Bharadwaj and has said that there should be an urgent hearing in Supreme Court regarding this case.

The Chief Minister of Nagaland Neiphiu Rio today attended the funeral service of civilians killed in the army’s anti-insurgency operations at Oting. At the funeral service, he was a poster in which it was written that civilians were cold-bloodedly murdered at Oting village. Several people were also showing placard at the funeral and were demanding justice.

Myanmar court has sentenced Aung San Suu Kyi for four years over inciting dissent against the military and breaching Covid rules. It is reported that she has been jailed for two years for imprisonment under section 505(b) and two years’ imprisonment under natural disaster law.

The winter Parliament session has began and at the starting of the winter session, 12 MPs from opposite were suspended over causing a ruckus in the monsoon session. However, to show the form of protest, Congress MP Shashi Tharoor said that he has decided to suspend his hosting of the Sansad TV show “To the Point” until the suspension of 12 Opposition members of Rajya Sabha is revoked.

The paramilitary forces opened fire due to which several villagers were killed and that resulted in the horribly off-script incident in which 13 villagers and one soldier were killed at an Indo-Myanmar border district in Nagaland. Today, in the Parliament, Home Minister Amit Shah will give a statement about the incident t9o both the houses.

Team India on December 6 registered its biggest win in terms of runs over New Zealand and clinched the Test series by 1-0 on Mumbai. Virat Kohli-led Men in Blue defeated New Zealand by 372 runs in the 2nd Test match. Opening batsman Mayank Agarwal and R Aswin along with Axar Patel were the hero of the match.

The President of Russia Vladimir Putin is all set to arrive in India today for the 21st annual India-Russia summit with Prime Minister Narendra Modi. At the summit, India and Russia are going to sign the pacts to boos the area of trade, defence, investment, technology and energy.

Omicron scare: 5 things to be taken care of before you plan to travel