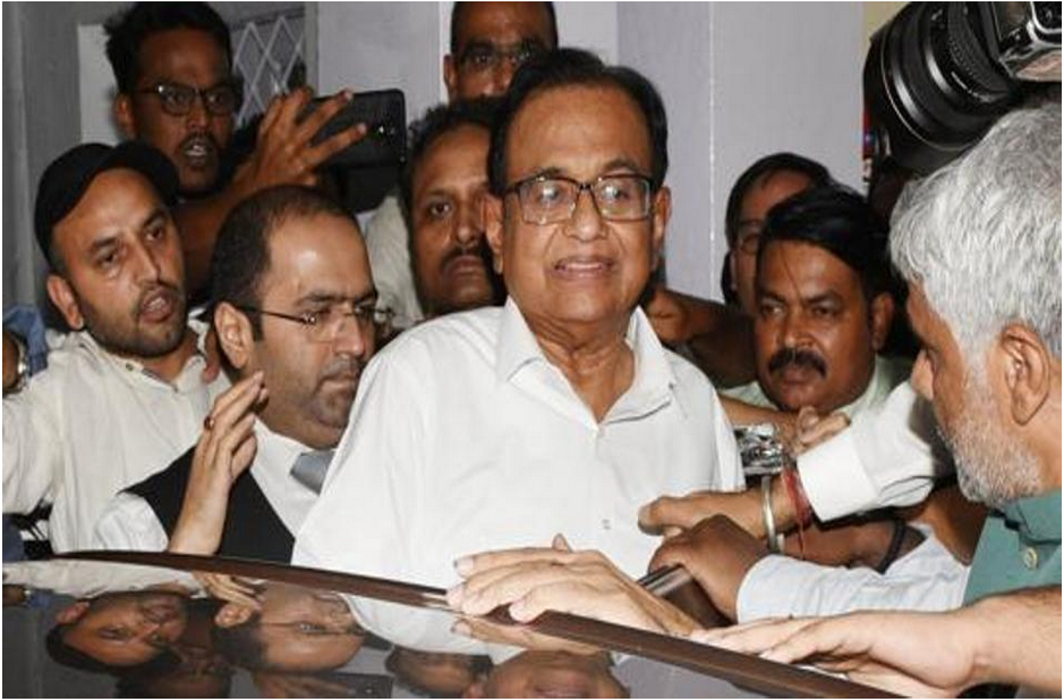 The SC bench of Justices R Banumathi and AS Bopanna would hear the arguments of the Enforcement Directorate (ED) on Chidambaram’s two petitions, including the challenge to remand orders, on Wednesday, reported PTI.

Yesterday as well Chidambaram’s protection from arrest in case being probed by ED had been extended by a day. In the case being probed by the CBI and being heard in trial court, however, the agency got to keep him in custody for further interrogation for another five days and he will be produced in the court on Aug 30. The CBI said he was confronted with one of the co-accused with a file containing email exchanging with respect to INX Media Scam is undertaken. “So we need more time to unravel the larger conspiracy,” Solicitor General Tushar Mehta had argued.

In the Supreme Court today, as hearing in the case being probed by ED resumed today, Chidambaram’s counsel senior advocate Kapil Sibal filed a rejoinder to the ED affidavit which lists countries where he and “his co-conspirators” allegedly had bank accounts and properties.

Sibal said the ED cannot place documents in the court randomly and “behind the back” for seeking custody of the accused.

He also sought transcripts of the interrogation conducted by the ED on three dates in the INX Media money laundering case.

Chidambaram was questioned in the INX Media case on three occasions. He has challenged the agency’s decision to arrest him, contending that he has answered to all their questions and the transcripts will prove that.

Sibal asked a bench of Justices R Banumathi and AS Bopanna to order the agency to produce the transcripts of the questioning conducted on December 19 last year, January 1 and 21 this year.

The agencies, he said, “are just producing documents at random and saying this is part of the case diary… They cannot place the documents behind the back and seek custody of accused”.

Abhishek Manu Singhvi, also part of Chidambaram’s legal team, said the case has been incorrect since beginning.The section on conspiracy in the PMLA Act (Prevention of Money Laundering Act) didn’t exist for the time when the alleged offences took place.

He told the Supreme Court that ED had charged the former minister for an alleged action in 2007-2008 under provisions of the money laundering law that were notified as an offence only in 2009.

“The Sections charged in the FIR were declared offences only in June 2009 through notification of amendment of the Prevention of Money laundering Act, one year after the alleged acts took place,” Singhvi said.

Constitutional law states that a person cannot be charged with a crime that was not an offence at the time of its alleged commission. Nor can he be given greater punishment than prescribed at the time of commission of the offence, Singhvi said.

A person is being “painted as a kingpin” of an alleged offence which did not exist as an offence at the time it was committed, said Singhvi, a reference to the Delhi High Court order that rejected Chidambaram’s request for pre-arrest bail. In this order that has been assailed by Chidambaram’s team, the judge had termed the former minister the kingpin of the scandal.

Further, Singhvi said a person being questioned by the agencies is “not obliged to give the answers the agencies want to hear”, he said, adding that it was sufficient if a person gives an answer to the questions put to him.

Chidambaram said he doesn’t have a bank account abroad and that his son Karti Chidambaram has a foreign account with the permission of the Reserve Bank. The agency’s move to arrest him and keep him in custody amounts to extraction of confession, he said. The accusation has been denied by the Enforcement Directorate.

During yesterday’s hearing, Chidambaram accused the Enforcement Directorate of leaking its document on charges against him to the media and blindsiding him with the allegations.

Chidambaram has been accused of facilitating a huge infusion of foreign funds into the media company INX Media in 2007, when he was Finance Minister, at the instance of his son Karti Chidambaram, who allegedly received kickbacks for his role.