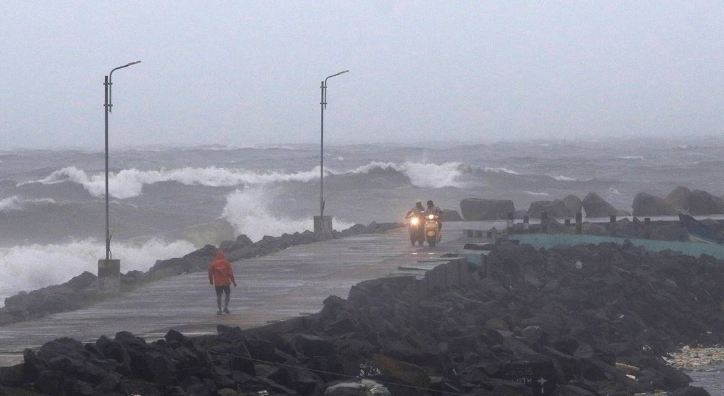 Around 2:30am, the coastal town of Marakkanam, 30 km north of Puducherry made landfall, witnessed unprecedented rainfall in the union territory and neighbouring Tamil Nadu. Currently, the wind speed of the storm recorded to be 80-95km/h blowing strongly to 105km/h according to IMD officials.

State Revenue Minister R B Udhayakumar said there were no reports of loss of lives or crop damage. Although trails of destruction in the form of uprooted trees and wall collapse were reported from some parts of Tamil Nadu, he said.

However, the insurance payout and compensation to farmers, if any, would be announced by Chief Minister K Palaniswami after further reviewing the situation, he added.

Udhayakumar said nothing untoward happened and weakening of the cyclonic storm is good news. People have given full cooperation. About 2.5 lakh people were given shelter as part of safety measures, he informed.

As a slew of measures, authorities in the state have been working on war-footing amid rainfall and flooding, power supply has been shut in vulnerable areas. A public holiday till Thursday was declared by authorities in the southern states.In the wake of the cyclone, Chennai airport, which was closed for 12 hours, has now resumed operation.

About 30 teams of the National Disaster Response Force (NDRF) have been deployed in the three states to restore normalcy in the state.The National Crisis Management Committee (NCMC) have ensured zero casualties.

Chief Minister E Palaniswami has urged people to stay indoors as far as possible to ensure people’s safety. He had earlier said that over 4,000 vulnerable locations have been identified and local officials have been told to keep watch.

Meanwhile, Prime Minister Narendra Modi had also spoken to the chief ministers of Tamil Nadu, Puducherry and assured them all help from the Centre.