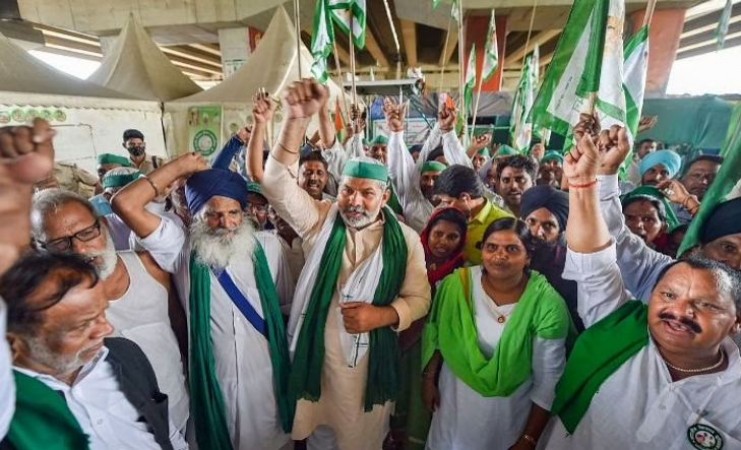 The agitating farmers on Thursday organised a national convention at Singhu border to mark the completion of nine months of their agitation against the Centre’s three contentious farm laws. A total of 1500 representatives of farmers, women, youth and workers will participate in the two-day-event to intensify the movement against the Centre’s farm legislations.

Three sessions will be organized in the event on Thursday, in which one session each will be organized on industrial workers, agricultural workers, rural, poor and tribal people including the inaugural session. The national convention is expected to discuss issues like repealing all three pro-corporate agriculture laws, legal guarantee for MSP (Minimum Support Price) of all crops, repeal of Electricity Bill 2021 and no persecution of farmers under Air Quality Management Commission Bill 2021 in NCR and adjoining areas.

Addressing the protestors at Singhu border, the Bharatiya Kisan Union leader Rakesh Tikait said the farmers’ delegation will refect on what the farmers have lost and gained in the last nine months.

Notably, thousands of farmers from Punjab, Uttar Pradesh, Haryana and other parts of the country have been protesting on different borders of Delhi since Nover 26, 2020, against the three farm laws: Farmers’ Produce Trade and Commerce (Promotion and Facilitation) Act, 2020; the Farmers Empowerment and Protection) Agreement on Price Assurance and farm Services Act 2020 and the Essential Commodities (Amendment) Act, 2020.

While the government projected the ne laws as major reforms in agriculture sector, farmers fear that the new farm laws have no mention of Minimum Support Price (MSP) and mandis that will leave them to the mercy of big corporates.

So far, several rounds of talks between the Centre and farmer leaders have failed as farmers are stuck to their demands of repealing the three laws. While the government asked them to consider their offer of deferring the laws to one and half years.

In other India news, External Affairs Minister S Jaishankar said the immediate priority is the evacuation of all Indians stranded in Afghanistan.

Government’s priority is to evacuate all Indians stranded in Afghanistan, Jaishankar says at all-party meet