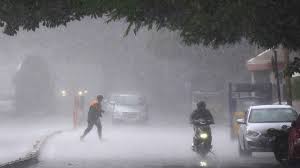 The India Meteorological Department (IMD) has issued the orange alert for Gujarat. This week, parts of Gujarat can witness extreme rainfall on December 1 and 2.

According to the India Meteorological Department (IMD), India will continue to fall in the unseasonal monsoon, as per the updated weather forecast. Hence, following the orange alerts for December 1, 2021, yellow alerts are also issued for December 2, 2021 in Gujarat.

Not only in Gujarat, but parts of it are going to be affected, by heavy to very heavy rainfall. IMD has issued alert for Gujarat districts, including Anand, Bharuch, Navsari, Valsad, Amreli and Bhavnagar.

Probably, the rainfall is expected to start on November 30, 2021, which will disturb the western parts of Gujarat, and later it is likely to affect the northwest and adjoining central India from the same night.

Farmers are strictly advised to take preventive measures for their harvest and standing crops which may be damaged due to the unseasonal massive rain. From November 30 to December 2, 2021 respectively, warning has been issued for the fishermen, moderate rain along with thunderstorms, lightning and surface wind of 40-60 kmph is expected on this day.

As per the IMD reports, downpour is expected on December 1, 2021 in Anand, Bharuch, Navsari, Valsad Surat, Dangs and Tapi, in Saurashtra districts, including Amreli, Junagadh, Gir Somnath, Botad and Bhavnagar, along with Panchmahal, Dahod, Chhota Udepur.