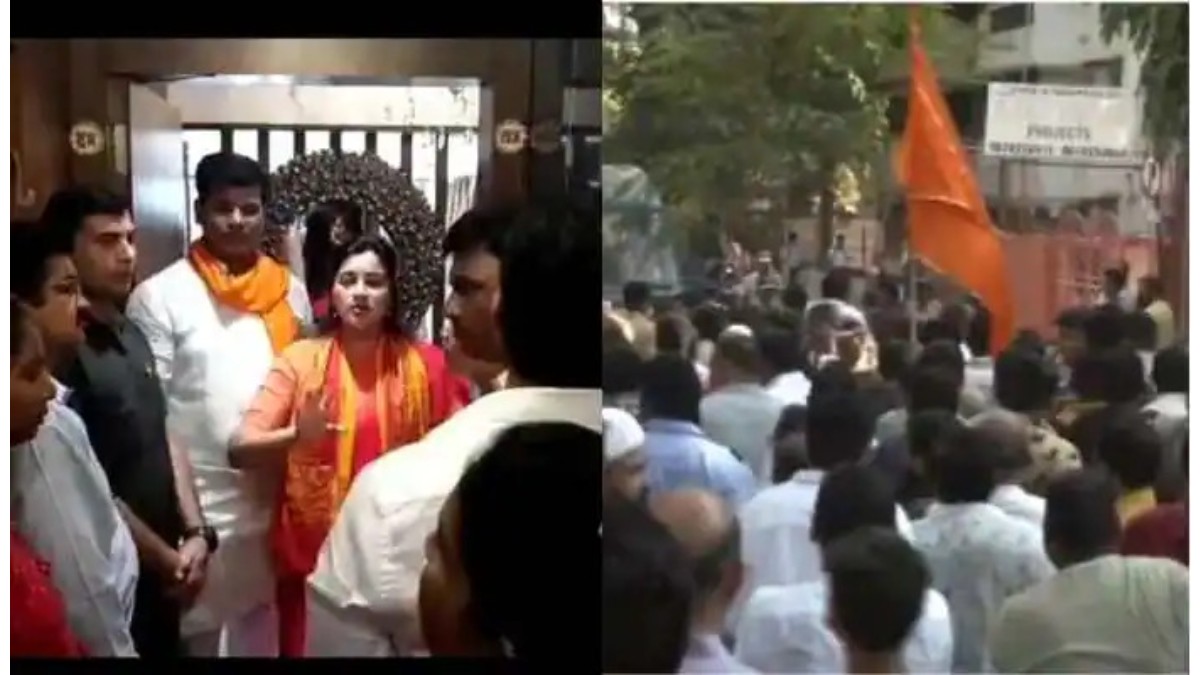 High drama unfolded in Maharashtra on Saturday after MP Navneet Rana and her husband Ravi Rana, who is an independent MLA from Badnera planned to chant the Hanuman Chalisa outside Matoshree, the private residence of Chief Minister Uddhav Thackeray. Soon after this announcement, barricades were set up and police officers were deployed outside CM’s residence.

Rana’s claim created a storm in Mumbai. Just after her statement, Shiv Sena workers started protesting outside the residence of Amravati MP Navneet Rana, following which security has been ramped up both at Rana’s residence and Matoshree.

The couple has faced demonstrations, but they claim they are fearless. The couple said the Chief Minister of Maharashtra has ordered Shiv Sena workers to heckle us. The barricades are being shattered. Navneet also stated that she will go outside her house and no one can stop her. If anything happens to her then CM Thackeray will be responsible for it, she alleged. The government has granted Y security to Rana. As Shiv Sena workers protested outside their Mumbai house, Rana said, CM only knows how to throw people in jail.

On Chief Minister Uddhav Thackeray’s orders, the Maharashtra MP claims she and her family are not permitted to leave the house. The couple said the workers from the Shiv Sena are attempting to attack their home. We’ve always considered Matoshree as a temple, they added. In a social media post, MLA Ravi Rana stated that Uddhav Thackeray is merely looking for political advantage.

Anil Desai, the Shiv Sena’s leader, informed ANI that they (MLA Ravi Rana and MP Navneet Rana) have brought the law and order situation into question. Someone had prompted them to do so. Workers from the Shiv Sena have arrived to protect Matoshree. The situation is under control, he added.

Kishori Pednekar, Mumbai Mayor also challenged the couple to come forward and said they will teach them a lesson. The situation of unrest comes at a time when MNS Chief Raj Thackeray said he will play loudspeakers outside all mosques if Azaan noises are not toned down.

New Tata EV all set to make global debut on THIS date, here’s all you need to know about vehicle