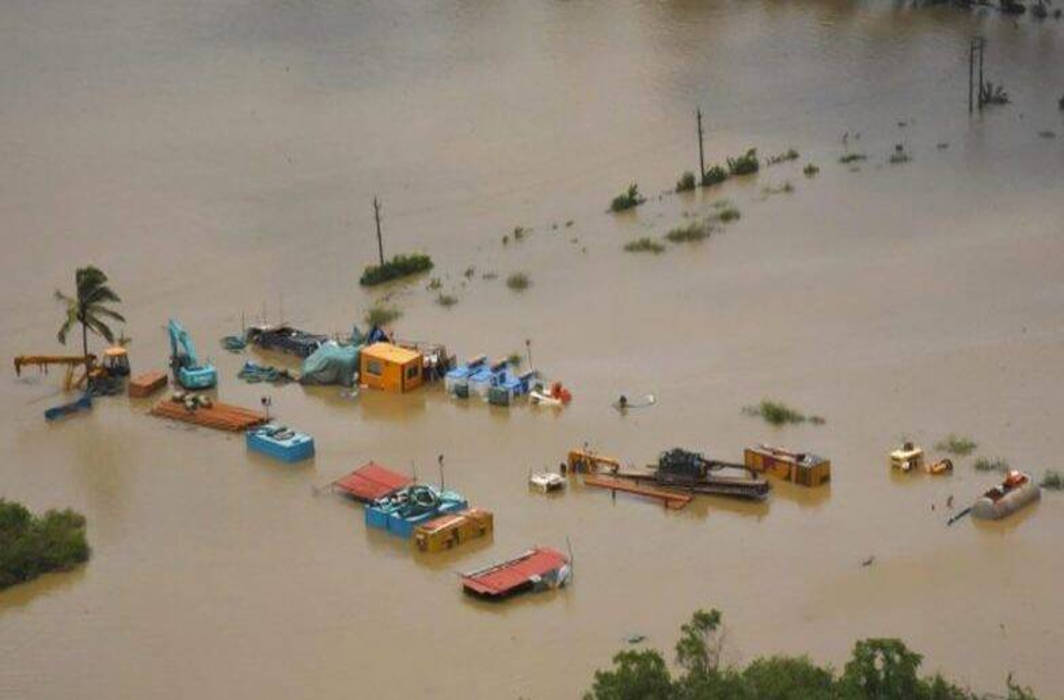 [vc_row][vc_column][vc_column_text]Flood situation in different parts of the country is still grim as torrential rains, gusty winds and landslides left a trail of destruction. The Indian Meteorological Department has predicted heavy to very heavy rains in Madhya Pradesh, Chhattisgarh, Goa, Maharashtra, Gujarat, Karnataka and Kerala for the next 24 hours.

In Maharashtra, despite a slight decrease in the intensity of rain, the situation still remains chaotic. Nine people drowned and five were missing after a boat engaged in rescue work overturned in Sangli on Thursday, said Deepak Mhaisekar, Divisional Commissioner of Pune.

“Nine persons died and five are still missing when the private boat they were travelling in overturned at Bramhnal village in Sangli’s Palus taluka. The deceased include seven women, one man and one child,” he added.

Nineteen people on the boat swam to safety. Initial reports said that the boat was overcrowded. It had 35 people on board, though it could only carry 20 people, he added.

Meanwhile, teams of NDRF, Army and Navy continued evacuating people to safer locations in coordination with the local administration. The commandant of the 5th Battalion of NDRF, Anupam Shrivastava, said 28 teams had been deployed in western Maharashtra. “Of these, 23 are in Sangli, Satara and Kolhapur. Three more teams are being flown in.”

Around 10 Navy teams have been deployed in the region. As on Thursday, the Army has deployed 16 columns, 14 engineer task forces, including a para special force team in Kolhapur, Sangli and Raigad districts of Maharashtra and Bagalkot, Raichur, Belgaum and Kodagu districts of Karnataka.

Chief Minister Devendra Fadnavis on Thursday conducted an aerial survey to review the situation in Sangli and Kolhapur, the severely affected districts.

In Gujarat, twenty-two gates of the Sardar Sarovar Dam were opened on Friday (August 9), first time after its installation in 2017, to maintain the water level at 131.18 metres.

In Karnataka, at least nine people were killed and as many as 237 villages in 32 taluks were affected after the water level in most rivers crossed the danger mark.

Karnataka Chief Minister BS Yediyurappa said that the Centre will extend all assistance to the state. “I am in constant touch with the Central government,” he said, adding that PM Narendra Modi, Home Minister Amit Shah and Defence Minister Rajnath Singh have been briefed on the rescue and relief efforts in Karnataka. 44,000 people have been evacuated from the flood-hit and rain-affected areas of the state and nine people have lost their lives.

Former Karnataka chief minister H D Kumaraswamy on Thursday also said all JD(S) legislators will donate a month’s salary to the for the relief work.

In Andhra Pradesh, Chief Minister Y S Jagan Mohan Reddy on Thursday conducted an aerial survey of the flood-hit Polavaram and Devipatnam regions in east and west Godavari districts, even as the water level at Sir Arthur Cotton Barrage at Dowaleswaram crossed the second danger mark.

Chief Minister Pinarayi Vijayan has sought the army’s help and additional 13 more units of the National Disaster Response Force (NDRF) for the relief and rescue operations.

The CM said a 24-hour control room has been set up at the State Police headquarters to assist those affected by the rains. People affected can reach the emergency response centre by calling 112, he added.

Meanwhile, Rahul Gandhi stepped in to help the people of his constituency and ensured that he would speak to PM Narendra Modi to see maximum help is extended to Wayanad. In Wayanad, a huge landslide at Meppadi has marooned around 2,000 people. A temple, mosque and estate workers quarters have collapsed in the area.

The Kerala government had declared a holiday for all schools across the state for Friday and university examinations have been postponed in the affected districts.

With Cochin International Airport flooded, operations have been suspended till 3 pm on Sunday.[/vc_column_text][/vc_column][/vc_row]