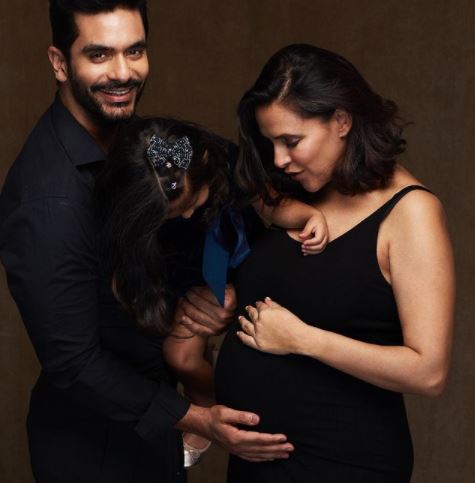 Actors Neha Dhupia and Angad Bedi on Monday announced their second pregnancy with a beautiful picture. Making the big announcement Dhupia shared a picture on her Instagram account that shows her in a black bodycon dress, Bedi in an all-black shirt and trousers, and their daughter Mehr in their arms. The family can be seen caressing Dhupia’s baby bump.

The 40-year-old actress wrote: Took us 2 days to come with a caption….The best one we could think of was … Thank you, God. #WaheguruMehrKare

The adorable couple Neha and Angad had tied the knot on May 10, 2018, in an intimate Anand Karaj ceremony in Delhi. They had their first daughter on November 18 in the same year. Speculation was rife that Neha was pregnant, which is why the couple had to rush into marriage.

On Mehr’s birthday last year, Neha wrote this touching note for her baby daughter: Our little baby girl… may you always be curious, sing even if you don’t know the lyrics, dance like no one is watching, forever be eager to learn, chase butterflies, spread joy wherever you go, light up the room with your adorable smile and roar the loudest cause deep down you will always be our little simbaa! #happybirthday our doll.

Neha Dhupia has worked in films such as Singh Is Kinng, Tumhari Sulu, Hindi Medium, and Lust Stories. On the other hand, Angad Bedi has last seen in Gunjan Saxena: The Kargil Girl. He has also worked in films like Soorma, Pink, Tiger Zinda Hai, and many others. He has also starred in the web series The Verdict – State Vs Nanavati.

In other India news, Arjun Ranatunga, a former World Cup-winning skipper, had criticized the Sri Lankan cricket board for agreeing to host a ‘second-string Indian team’ in a limited-overs series, calling it an ‘insult’.