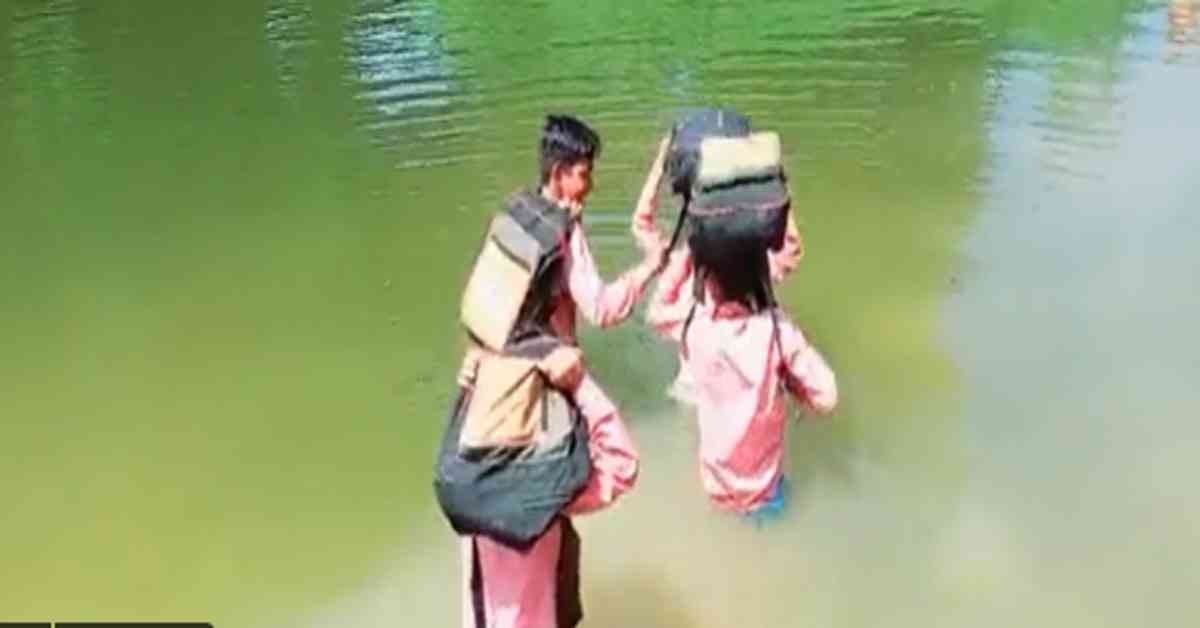 A video of school kids crossing a lake to reach school in Madhya Pradesh’s Jhansi is surfacing on the internet.

In the viral video shared by a Twitter user, a group of school kids in the Naunihal area of Jhansi could be seen crossing a wide lake and passing through the middle of the water till their neck to reach to school. Reports said the school kids go to the Rajgiri Primary School in Bangra block which is 80 km from the Jhansi headquarters.

There is no bridge to cross the lake which forced little kids to take such dangerous step.

Soon after the video went viral, Madhya Pradesh Deputy CM Keshav Prasad Maurya slammed the school and blamed the authorities. Backing the government, he further said it is the job of the school to complain for the government to take action.

A bridge was also constructed on the Baruha river which connected village Sarswahi and Dadrohi, however, it was damaged years ago and wasn’t fixed every since, reports further stated.

There are no better route in the district following which primary school students chose to cross the rough Baruha river to reach to school, reports said. The lack of routes have raised severe concerns for school kids in Madhya Pradesh especially during the monsoon season.

It was the longest running commission in India’s history with several extensions granted by various governments. 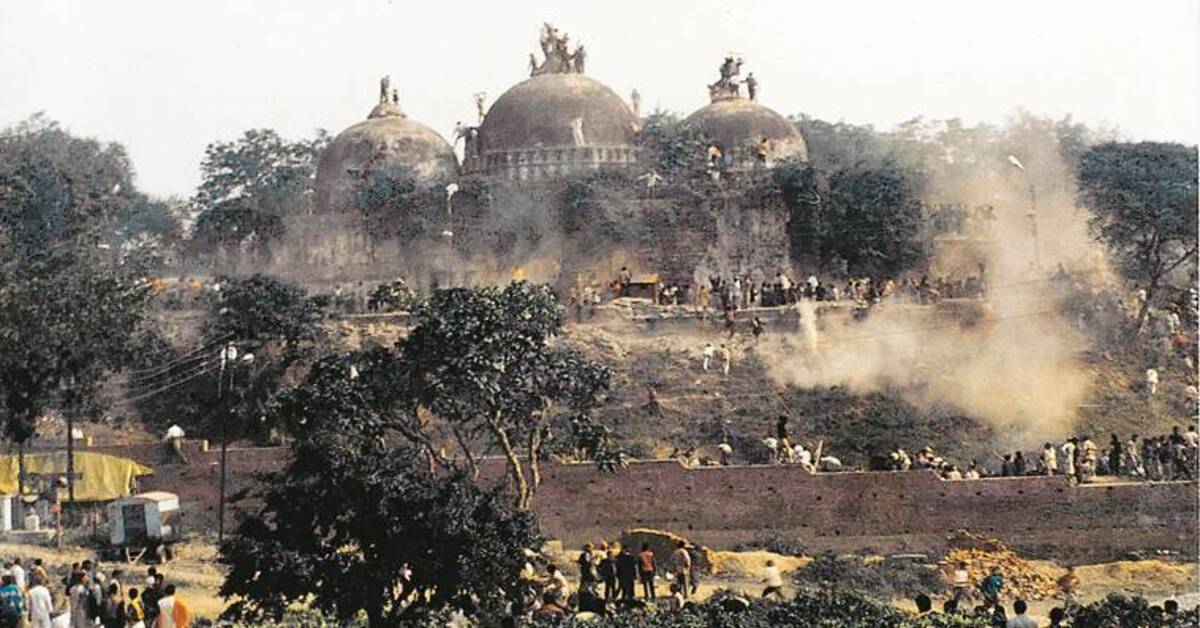 It has been 30 years of the demolition of the Babri Masjid in Uttar Pradesh’s Ayodhya took place on December 6. The destruction actually transpired on the same date in 1992, after which it is considered one of the darkest days in the history of India. The disputed structure, which now is called Ram Mandir has been at the epicenter of many political debates and even has helped political outfits garner votes over this agenda.

The Demolition came after the Hindu outfits and other community people staked claims of the land to be the birthplace of Lord Ram, and alleged that the Mughal emperor who built the mosque in 1528 actually built on Lord Ram’s birthplace.

The day for many Hindu outfits and their supporters is perceived as a glorious triumph over one particular religion. However, contrary to this, many others see it to be as the darkest day in the history of India as the movement for religion came at the cost of lives. The topic of Ram Mandir has always found its way as the crux of many political debates or even has become a buzzword for political leaders to garner votes by milking the name of Ram Mandir.

What led to Babri Masjid’s Demolition?

The Demolition of the Babri Masjid came after a chain of episodes that triggered the Hindu to take law into their own hands. In December 1949, Lord Rams idols were planted inside the Masjid that triggered protests by Hindu and Muslim communities across the county. In 1989, the then Prime Minister, Rajiv Gandhi, gave a nod to Hindu outfits to conduct a ceremony, Shilanyas inside the mosque premises.

LK Advani’s Rath Yatra in the 1990s added on to build a Ram temple on the land of Babri Masjid. Late UP CM, Mulayam Singh Yadav Government’s action also brought the movement to the limelight after they instructed the police to fire at the Hindutva mob who were marching towards Babri Masjid. The firing led to 16 deaths of the Kar Sevaks which included the famous Kothari brothers.

The land of Babri Masjid which is now turned into the land of Ram Mandir was also amongst the leading agenda topics for BJP at that time.

Later, in 1992, the demolition was carried out by the Kar Sevaks or mobilised Hindu outfits namely Vishwa Hindu Parishad (VHP), RSS, Shiv Sena, and more. Many different organizations joined hands to pull down the 16-Century mosque in the city of Ayodhya on December 6. The demolition was also propelled by BJP’s LK Advani’s Rath Yatra which was carried out in the 1990s and as a ramification, LK Advani was arrested for it later on.

What all happened that day?

The Karsevaks or mobilization of the Hindu outfits aimed to put a conclusion to the Babri Masjid land dispute themselves, after they failed to win the battle on legal grounds. On December 6, 1992, the Kar Sevaks proceeded to carry out their mission and surrounded the Babri Masjid. According to reports, within hours, the Karsevaks successfully demolished the 16-century mosque.

The reason for the demolition was always to reclaim the land which is allegedly the birthplace of Lord Ram and the Hindu groups also claimed that it was also built by demolishing Ram Mandir. Reports also suggest that over 2,000 people were killed during the demolition of Babri Masjid.

The Supreme Court delivered its verdict on the disputed land and ruled in the favor of Ram Lalla who had sought staked claims of the land and had wished to build the temple of Lord Ram on it on November 9, 2019. The Supreme court also allotted five-acre land to the Sunni Waqf Board to build a mosque. It was the longest running commission in India’s history with several extensions granted by various governments.

6 people kill man by smashing his head with stone in Bengaluru, murder caught on CCTV 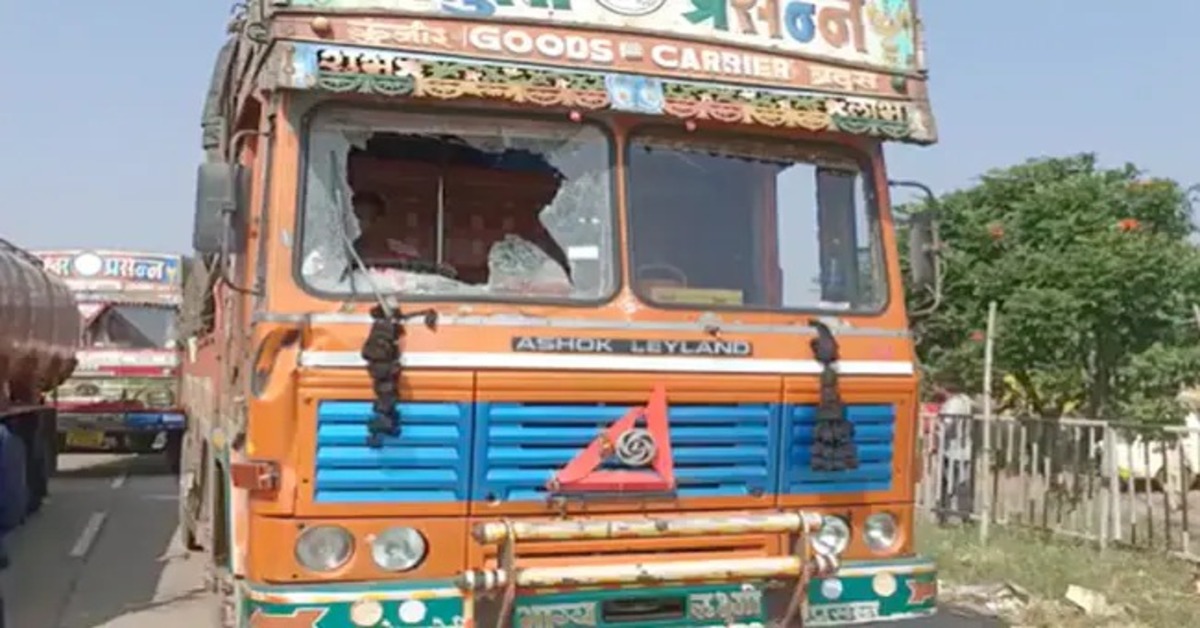 The border dispute between Karnataka and Maharashtra is taking a violent turn. Following a protest in Belagavi by an organization called Karnataka Rakshana Vedike, trucks with Maharashtra number plates were stopped, vandalised and black ink was applied on them. Several trucks were also pelted with stones.

Belgaum city is at the center of this dispute. Maharashtra has consistently claimed that this Marathi-majority region was wrongfully given to Kannada-majority Karnataka in the language-based reorganization of states in the 1960s. Karnataka has recently resumed its claim on some villages in Maharashtra, triggering a fresh round of acrimony, despite the fact that BJP is the only party in power in both these states.

Ruckus started after the windshield of a truck was damaged during protests today, after large number of protesters blocked traffic carrying the traditional Kannada/Karnataka flag. Large number of Policemen have also been deployed to calm the situation, but the protesters continued to jostle with the police and lay down on the road.

Due to this protest, two Maharashtra ministers, Chandrakant Patil and Shambhuraj Desai, postponed their scheduled visit to Belagavi. On Monday, Karnataka Chief Minister Basavaraj Bommai had said that the yatra could pose a law and order challenge. Maharashtra has appointed Patil and Desai as co-ordination ministers, as the dispute is yet again in the Supreme Court.

Another case of border-line violence was reported in Belagavi about a week ago, at a college festival, when a student waving a Kannada flag was attacked by some Marathi students. Teachers and other staff of the host college in Belagavi’s Tilakwadi intervened to stop the fight and later the police had to start an investigation.

Agnihotri said in his affidavit that he had removed his tweets that criticised the judge. 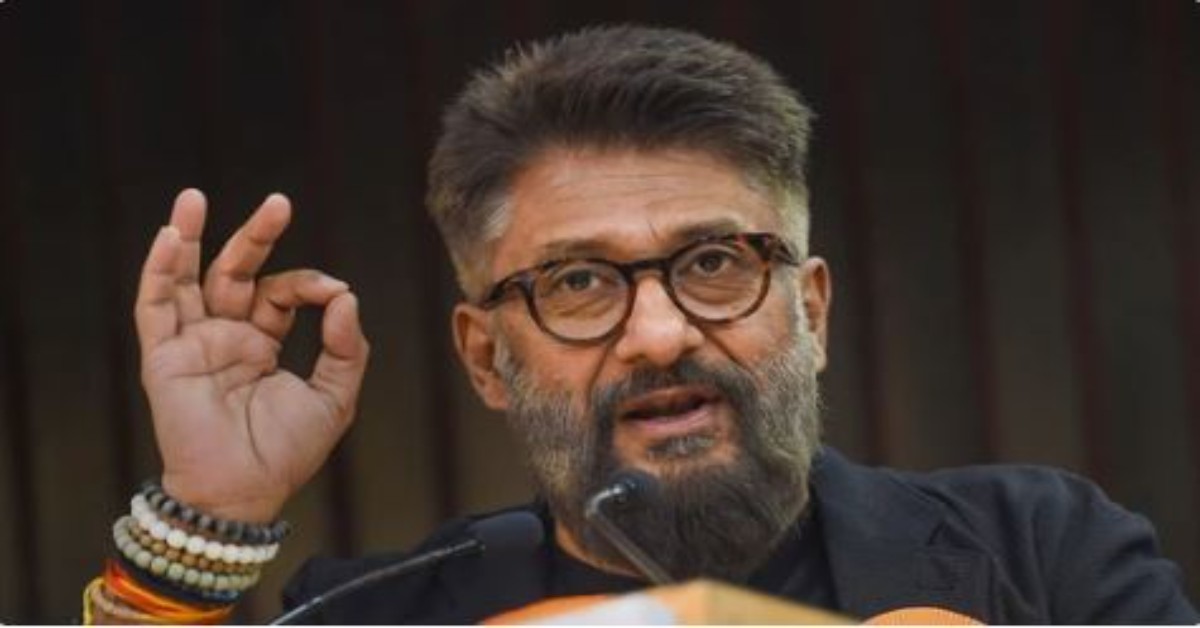 In connection with his comments against Justice S. Muralidhar, who was a member of the Bench that placed activist Gautam Navlakha under house arrest in connection with the Bhima Koregaon riots of 2018, the Delhi High Court ordered Vivek Agnihotri, Director of The Kashmir Files, to remain present before the Court on March 16.

Before the Division Bench of Justices Siddharth Mridul and Talwant Singh, Agnihotri offered an unequivocal apology. The Division Bench reviewed his affidavit and underlined that because the case was brought on its own initiative, Agnihotri should be present in court on the subsequent date of hearing.

Following the High Court’s decision to move ex-parte against Agnihotri, the online news source Swarajya, and Consulting Editor of Swarajya Anand Ranganathan for their disparaging remarks against Justice Muralidhar, Agnihotri issued an apology.

Agnihotri said in his affidavit that he had removed his tweets in which he made critical remarks against the judge.

When the case was heard on Tuesday, Amicus Curiae Senior Advocate Arvind Nigam noted that Agnihotri’s argument might be incorrect because Twitter’s affidavit suggested that the microblogging platform, rather not the director, may have deleted Agnihotri’s tweets.

Earlier on November 19, in accordance with the Supreme Court’s ruling mandating that he be placed under house arrest, Navlakha was transferred from Taloja Central Prison to Navi Mumbai.

The National Investigation Agency was criticised by the Supreme Court on November 18 for disobeying its order from November 10 directing NIA to move activist Navlakha from Taloja Prison, where he was being held in connection with the Elgar Parishad Maoist links case, to the house specified by him within the following 24 hours.

The 73-year-old will live in the residence for the next month, but the bench of Justices K.M. Joseph and Hrishikesh Roy allowed NIA to install additional security measures, such as locking the hall grills and shutting the kitchen door leading to the departure point.