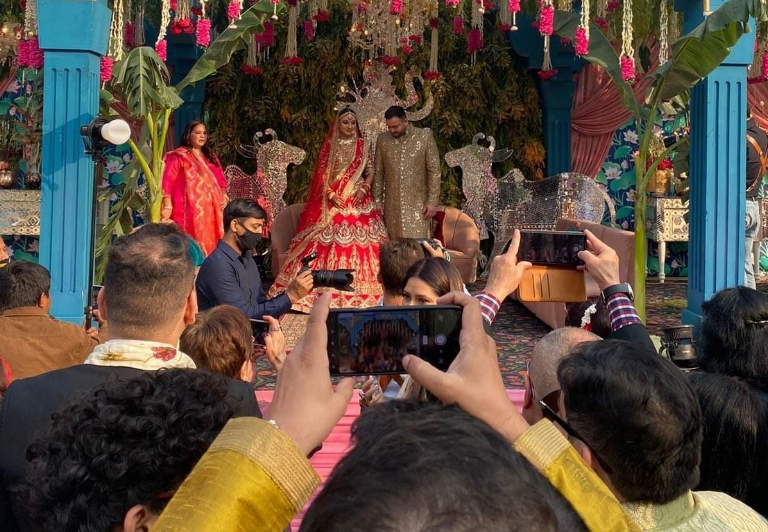 Bihar’s Deputy Chief Minister and Lalu Prasad Yadav’s son Tejashwi Yadav got married with his long-time family friend Rajshri on Thursday at a ceremony in Delhi.

The event took place at Sainik Farms and was attended by top political leaders including the Samajwadi chief Akhilesh Yadav, Rajya Sabha MP Misa Bharti and others. The wedding was a low-key affair and only selected people from the family and party attended it.

Heavy security arrangement were made for the engagement ceremony and no media personnel were allowed to enter the venue.

The couple got engaged on Tuesday night in the presence of close friends and family. They have known each other for over seven years, India Today reported. However, their pictures in which Tejashwi can be seen in the dress of the groom are rounding on social media.

It is being said that the families of both have known to each other for a long time. Although, there were no planning for Tejashwi’s marriage but the decision has been taken due to the poor health condition of his father Lalu Prasad Yadav.

The official confirmation of the engagement of Tejashwi was made by his elder sister Rohini Archarya on her official Twitter handle on Wednesday.

Tejashwi, 32, is the only one left (among the nine children of Lalu-Rabri) who was not married.

The identity of the bride-to-be remains a mystery. Whenever the RJD leader was questioned by the media about his marriage, he always replied that his parents will take this decision.

However, after hearing about Tejashwi’s marriage with his long time friend, people are trying to know who is his future companion?

Read Also: From Virat Kohli to PM Modi: Here are the top tweets, hashtags of 2021

Yadav’s future companion lives in Vasant Vihar Delhi with her family. They have apparently known each other for a long time and are finally getting married.

The girl belongs to a non-political family and her father is a school principal in Chandigarh. It is also being said that the girl is a Christian, and her family is well-acquainted with Tejashwi Yadav’s family.

Tejashwi had earlier said that he would like to marry a girl who is supportive, understands his work, and stands up to support his family when required.