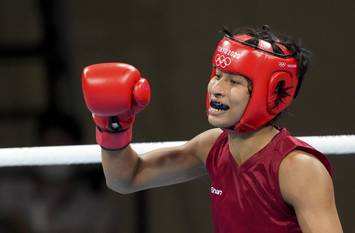 The 23-year-old Indian boxer loses the Women’s Welterweight semi-final but managed to claim bronze on the 12th day of the Tokyo Olympics 2020.

With this win, Lovlina Borgohain became the only third Indian wrestler to have an Olympic medal under the belt. Prior to her Boxer Vijendra Singh and Mary Kom are the only two Olympics medalists in boxing for India.

Lovlina Borgohain is the first female boxer from Assam to be able to achieve this laurel. Assam boxer is also the two times world champion bronze medalist.

After her tremendous achievement at Olympics, celebrations have started at her residence in Golaghat’s Baromukhia. According to the reports, officers from Assam has visited her home with sweets a little while ago.

Lovlina followed her family legacy as both her elder sisters, Licha and Lima have pursued Kick-boxing at the national level. Bronze medalist took Muay Thai at a young age but later switched to Kick-boxing.

Borgohain bagged the bronze but lost to Surmeneli of Turkey by 0-5.

Also, wrestlers Ravi Kumar and Deepak Punia have made it to the semi-finals and are just a win away to win medals for India in boxing.

India is currently at the 62nd spot on the Olympics points table with two bronze and one silver medal under its belt.

Each medal has come so far in different sports and has been bagged by the female athletes of India.

Meanwhile, India’s poster boy Neeraj Chopra is also eyeing a medal as he qualified into the final stage of Men’s Javelin Throw in his first attempt.

In other India news, Indian Javelin thrower Neeraj Chopra qualified into the men’s final with a stunning throw of 86.65m at the Olympic Stadium on Wednesday.