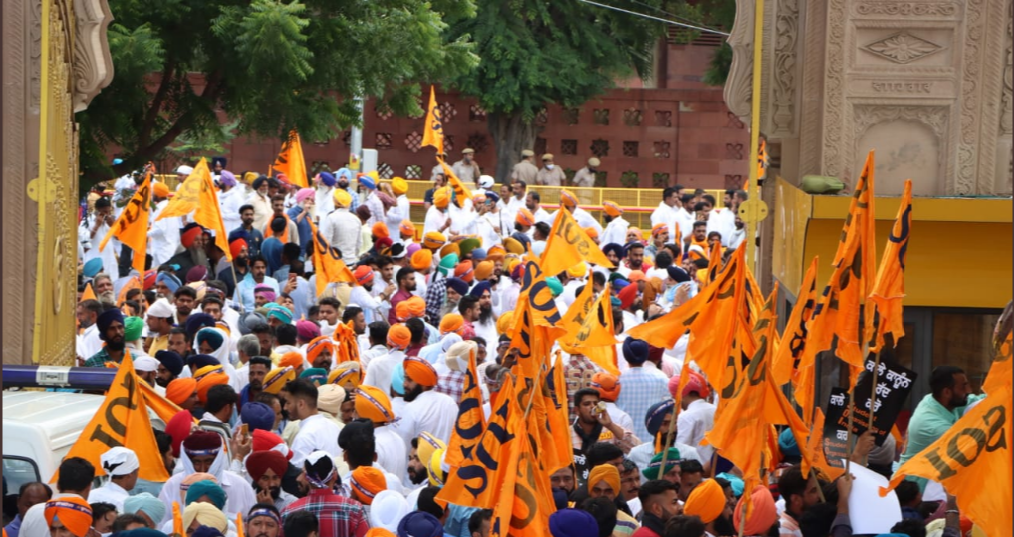 Ahead of the Black Friday protest march led by the Shiromani Akali Dal (SAD) on completion of one year of enactment of the three farms laws, the Akali Dal on Friday said Gurdwara Rakab Ganj Sahib is being cordoned off and Delhi borders are being sealed.

The party also alleged that Punjab registered vehicles are being stopped at the Delhi borders.

Shiromani Akali Dal leader Harsimrat Kaur Badal also tweeted that the Akali Dal leaders have been stopped from entering Delhi. This is a sad reminder of the dark days of democracy, Badal said.

A senior police officer informed the reporters that the Akali Dal supporters have gathered at Delhi’s Gurudwara Rakab Ganj on Friday morning to hold the protest march against the farm laws.

A protest march, which was called by the SAD president Sukhbir Singh Badal to mark the completion of one year of implementation of farm laws, organised on Friday at 9.30 am from Gurdwara Rakab Ganj Sahib to the Parliament building.

Gurdwara Rakabganj Road, RML Hospital, GPO, Ashoka Road, Baba Kharak Singh Marg will be chocked due to the farmers’ protest, the Delhi Traffic Police tweeted. They also tweeted that the road from Sardar Patel Marg to Dhaula Kuan has been closed for traffic and both the roads of Jharoda Kalan border have been barricaded due to farmers’ protest.

The traffic coming from Gurgaon to Sadar Patel Marg has also been diverted towards Ring Road Moti Bagh, the traffic will remain heavy, another tweet said.

In other India News, A-16-year-old girl was raped by three men in Madhya Pradesh’s Bhopal on last Sunday. The incident took place on September 12 in Bhopal’s Gunga locality, where the survivor had gone to take care of her ailing elder sister.