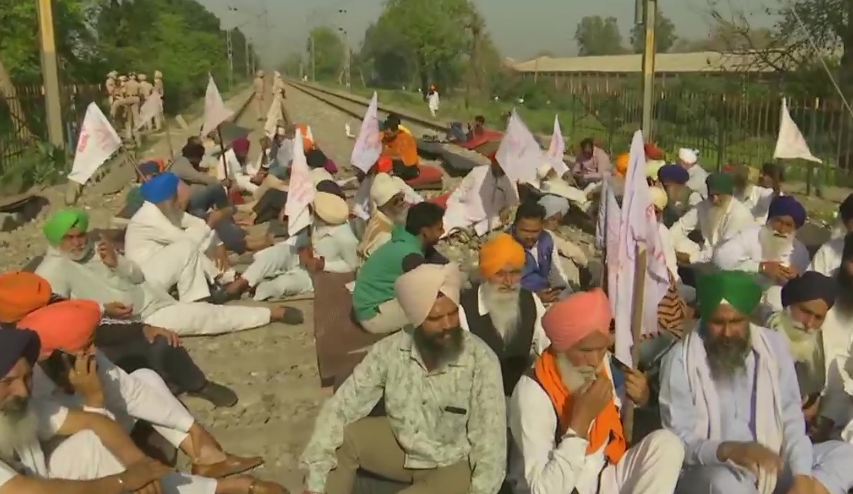 The Samyukt Kisan Morcha, a coalition of farmers’ unions, has called for a Bharat Bandh on Friday, to mark four months of their agitation at Delhi’s borders and reiterate their demand to repeal three contentious farm laws. The strike call will be observed till 6 pm.

The vehicular movement was disrupted as thousands of protesting farmers from Punjab, Haryana, Uttar Pradesh and several other states have been staging demonstrations at Singhu, Tikri and Ghazipur border of the national capital. The public transports like buses, taxis etc stayed off the roads.

The rail traffic was also hit by the protests. Some trains from Delhi to Amritsar, Chandigarh, Kalka, among others were cancelled. The protesting farmers have also blocked railway track in Amritsar and other states.

The Samyukta Kisan Morcha appealed to the citizens to make the nationwide strike a success. They also appealed to the protesting farmers to be peaceful and not get involved in any kind of illegitimate debate and conflict during the strike.

In a video message, Samyukta Kisan Morcha leader Darshan Pal had said that supplies of vegetables and milk will also be stopped by the protesting farmers. Farmers will block rail tracks in various places. Markets and transport services will be closed during ‘Bharat Bandh, said the  senior farmer leader Balbir Singh Rajewal.

Congress leader Rahul Gandhi has extended support to the Bharat Bandh. He tweeted ”History is witness that through Satyagraha injustice, arrogance and exploitation ends and the agitation should be in the interest of the country and should be peaceful.”

This is the second nation-wide strike called by the farmers in order to intensify the ongoing protests against the Centre’s new farm laws. The first ‘bandh’ took place on December 8 which was witnessed in Delhi, Maharashtra, Haryana, Punjab, Karnataka, Tamil Nadu and Assam. It received support from several trade unions, various other organisations and also from 24 opposition parties, including the Congress and the NCP.

The protesting farmers have held over 10 rounds of talks with the Centre to resolve the stalemate but to no avail. Thousands of farmers, mostly from Punjab, Haryana and Uttar Pradesh, have camped on the borders of Delhi since November 26, although their numbers have dwindled in recent weeks.

Ahead of his Bangladesh visit, PM Modi writes Op-Ed in Bangladeshi daily, says partners towards a golden future