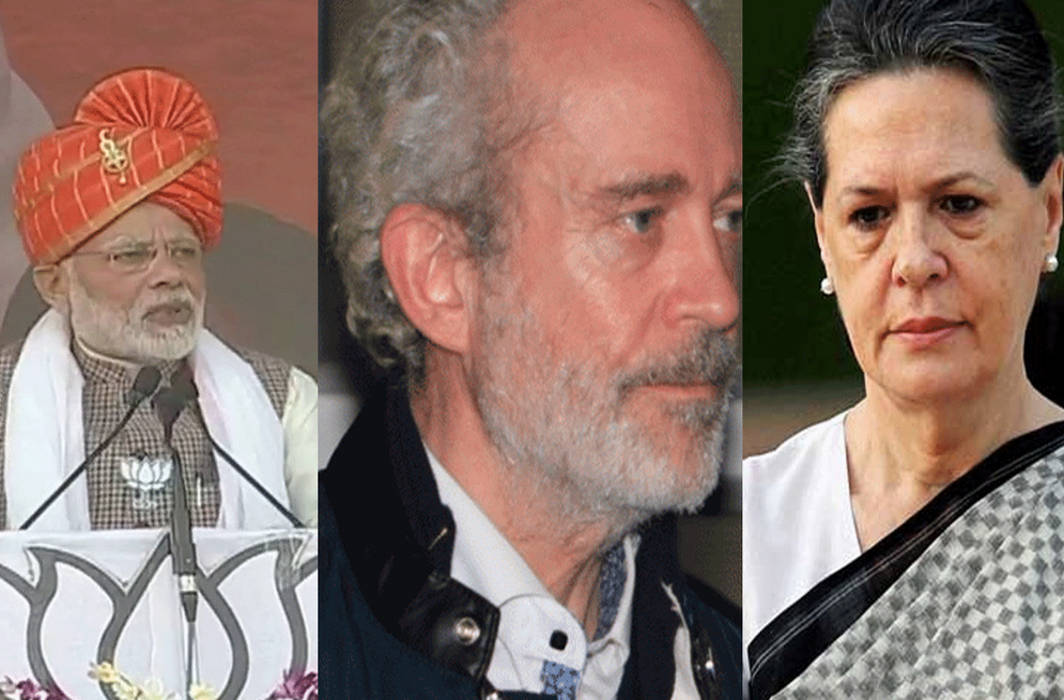 A Delhi court today (Saturday, April 6) issued notice to the Enforcement Directorate (ED) on plea of Christian Michel, alleged middleman arrested in the AgustaWestland VVIP chopper case, accusing the agency of politicising the case and leaking the chargesheet copy to the media even before the court took cognisance of it and before serving a copy to the accused.

The ED, on the other hand, sought an enquiry as to how the copy of the charge sheet was leaked to the media and asked for issuance of notice to a news organisation asking to explain how they accessed the document.

Issuing the notice to ED, special judge Arvind Kumar directed it to file a reply on Michel’s plea. Michel had stated in his plea that he had not named anybody in connection with the deal during investigation by the ED and that the agency had leaked the charge sheet, even though the court has not taken cognisance over the documents filed before it, in order to make the entire case a sensation again in the media,.

The court will take up the matter of leaking of the charge sheet copy on April 11.

Senior Congress leader Ahmed Patel and one “Mrs Gandhi” are named in the ED chargesheet against Christian Michel filed before a court in Delhi on Thursday.

Michel yesterday challenged ED’s chargesheet, denying he had mentioned any names to ED.

The Enforcement Directorate chargesheet comes just days before the national election, for which campaigning is at its peak. The Congress alleges that the chopper investigation has been ramped up in an attempt to target its top leaders in election season, mainly to deflect attention from the Rafale deal controversy.

The BJP says the case could spell “serious trouble” for the “first family” of Congress, referring to its chief Rahul Gandhi and his mother Sonia Gandhi.

The BJP used the allegations in the ED chargesheet to mount an attack on Congress.

Targeting the Congress leadership, Modi told a rally in Dehradun: “You will recall that your chowkidar had brought back from Dubai some of the helicopter scam middlemen. The agencies questioned Italy’s Michel mama and other middlemen for several weeks, based on which a chargesheet has been filed in court. I saw in the media that among those the helicopter scam middlemen were said to have paid bribes, there was one AP, AP, and the second FAM, FAM. This chargesheet says AP means Ahmed Patel and FAM means family.”

Finance Minister Arun Jaitley was reported as having said that the Congress should respond as to who were mentioned as ‘RG’, ‘AP’ and ‘FAM’ in documents summoned by the ED in the AgustaWestland case. He added that Swiss police, in 2013, had also confiscated records carrying similar initials in its raids in connection with the case.

Jaitley, while targeting Congress president Rahul Gandhi, said “any diary is a written admission and is admissible against the writer, especially when there is corroborating evidence. It is also admissible against fellow accused if it was written at the same time as the conspiracy was being hatched. This law was passed by the Privy Council in the Mirza Akbar case”.

Jaitley did not take names but he was was referring to the ED claim of an entry ‘RG’ in a diary of Sushen Mohan Gupta, an accused in the chopper deal case who is in custody. The ED has told a Delhi court that “Sushen is not coming out with true and correct fact” in “identifying who the real ‘RG’ is” in the diary.

This, however, prompted a riposte from Congress which reminded Jaitley of the stand he and Modi government has been taking in other cases, like Sahara and Birla diaries and BS Yeddyurappa’s diary, claiming they were not evidence.

Diary aside, Modi government has not admitted that Rafala fighter jet deal merits probe despite official files and notings raising pertinent questions about the way the deal was negotiated.

Randeep Surjewala, Congress’s chief spokesperson, said that the Jaitely is showing immense trust in “diary entries” to level “bogus” charges, even as the BJP is “mute” on Yeddy and Sahara diaries.

The purported Sahara diaries were recovered following raids conducted in November 2014. Reportedly, the Sahara diaries listed alleged pay-offs to politicians. The Yeddy diaries refer to former Karnataka chief minister BS Yeddyurappa’s alleged diary which, according to Congress, had accounts of ‘bribes’ given to BJP leaders. The PM Modi’s government had dismissed all such accusations.

Not evidence[/vc_column_text][/vc_column][/vc_row][vc_row][vc_column][vc_raw_html]JTNDYmxvY2txdW90ZSUyMGNsYXNzJTNEJTIydHdpdHRlci10d2VldCUyMiUyMGRhdGEtbGFuZyUzRCUyMmVuJTIyJTNFJTNDcCUyMGxhbmclM0QlMjJlbiUyMiUyMGRpciUzRCUyMmx0ciUyMiUzRUVEJTIwbGllcyUyMGFzJTIwTWljaGVsJTIwZGVuaWVzJTIwJTNDYnIlM0UlM0NiciUzRUJ1dCUyMEJKUCUyMHNheXMlM0NiciUzRSUzQ2JyJTNFQmlybGElMjBEaWFyaWVzJTIwJTNBJTNDYnIlM0UlM0NiciUzRSUyNnF1b3QlM0IlMjBHdWphcmF0JTIwQ00lMjAtJTIwUnMlMjAyNSUyMGNyb3JlcyUyMC4xMiUyMHBhaWQlMjAuJTIwMTMlMjAlM0YlMjAlMjZxdW90JTNCJTNDYnIlM0UlM0NiciUzRVNhaGFyYSUyMERpYXJpZXMlMjAlM0ElM0NiciUzRSUzQ2JyJTNFJTI2cXVvdCUzQiUyMGNhc2glMjBnaXZlbiUyMGF0JTIwQWhtZWRhYmFkJTIwJTJDJTIwTW9kaSUyMGppJTIwJTI2cXVvdCUzQiUzQ2JyJTNFJTI2cXVvdCUzQiUyMGNhc2glMjBnaXZlbiUyMHRvJTIwQ00lMjBHdWphcmF0JTIwJTI2cXVvdCUzQiUzQ2JyJTNFJTNDYnIlM0U0MCUyMGNyb3JlcyUyMHRvJTIwTW9kaSUyMGppJTIwLiUzQ2JyJTNFJTNDYnIlM0VZZWRpeXVyYXBwYSUyMERpYXJ5JTIwJTNBJTNDYnIlM0UlM0NiciUzRTE4MDAlMjBjciUyMHRvJTIwQkpQJTIwbGVhZGVycyUyMCUzQ2JyJTNFJTNDYnIlM0VOb3QlMjBldmlkZW5jZSUzQyUyRnAlM0UlMjZtZGFzaCUzQiUyMEthcGlsJTIwU2liYWwlMjAlMjglNDBLYXBpbFNpYmFsJTI5JTIwJTNDYSUyMGhyZWYlM0QlMjJodHRwcyUzQSUyRiUyRnR3aXR0ZXIuY29tJTJGS2FwaWxTaWJhbCUyRnN0YXR1cyUyRjExMTQzODU3OTQ2NDk3MzUxNjglM0ZyZWZfc3JjJTNEdHdzcmMlMjU1RXRmdyUyMiUzRUFwcmlsJTIwNiUyQyUyMDIwMTklM0MlMkZhJTNFJTNDJTJGYmxvY2txdW90ZSUzRSUwQSUzQ3NjcmlwdCUyMGFzeW5jJTIwc3JjJTNEJTIyaHR0cHMlM0ElMkYlMkZwbGF0Zm9ybS50d2l0dGVyLmNvbSUyRndpZGdldHMuanMlMjIlMjBjaGFyc2V0JTNEJTIydXRmLTglMjIlM0UlM0MlMkZzY3JpcHQlM0UlMEE=[/vc_raw_html][/vc_column][/vc_row][vc_row][vc_column][vc_column_text]Congress leader Ahmed Patel, in a series of tweets, said: “It is election season and the rain of rhetoric has started. There is a shower of baseless and hilarious allegations. We have full faith in the judiciary that the truth can never be hushed up. Milk and water will be sifted. Looks like ED is now an integral ally in the NDA. But such tactics will not work. You cannot escape from real issues like unemployment, farm distress and traders’ problems. It is clear that the Modi government is rattled… the middlemen of Rafale and demonetisation cannot escape. You must have heard the saying that a thief thinks everyone is a thief.”[/vc_column_text][/vc_column][/vc_row]