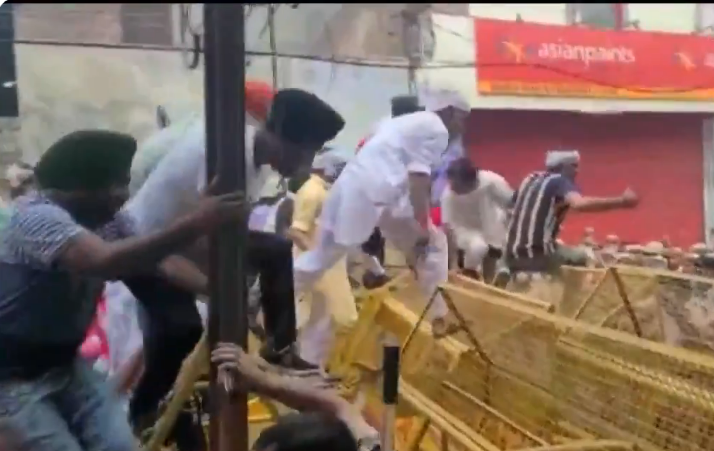 Two back-to-back clashes between the farmers and the Haryana police broke out on Saturday in two districts of Haryana while protesting against BJP leaders who arrived to participate in some events.

Today’s confrontation was reported from Yamunanagar and Hisar districts of Haryana, whose Manohar Lal Khattar-led government has for many months now tried to curb their show of dissent by blocking roads to Delhi and shutting or slowing down telecom services.

Farmers confrontation with police took place at Yamunanagar district of BJP ruled Haryana where Transport Minister Moolchand Sharma was scheduled to address a party meeting, but before that a clash broke out between the police and the farmers. The farmers had earlier given a call to not allow BJP-Jannayak Janata Party (JJP) leaders to address any public programme in the district.

Following such a threat, police has tightened the security arrangement barricading the programme venue. The farmers, however, arrived on tractors and dismantled the barricades.

Similar incidents were repeated in Hisar where state BJP president Om Prakash Dhankar was scheduled to address a programme at the Guru Jambeshwar University.

Amid tight security arrangements at the main gate of the university, the farmers arrived at the venue by noon.

The farmers, who have been camping at Delhi borders for the last 8 months, still have no solution seems to be found at the moment. For the past several months, there has not been any dialogue between the government and the farmers.

After the expansion of the Modi cabinet, the Union Agriculture Minister had said that the government is ready to continue talks with the farmers. To this, farmer leader Rakesh Tikait had replied that if the Centre wants discussion on farm laws then the farmers are ready for the meeting.

Two days ago, Agriculture Minister Narendra Singh Tomar had appealed to farmers’ organizations to end their agitations and begin talks with the government, although the organizations refused his repeal.

Farmers leader Rakesh Tikait said that farmers will not follow the instructions of the government and if the government wants to talk, do it, but without imposing any condition.

In other India News, the white ball series between India and Sri Lanka has been postponed to begin from July 18 due to reported Covid-19 positive cases in Sri Lankan camp.