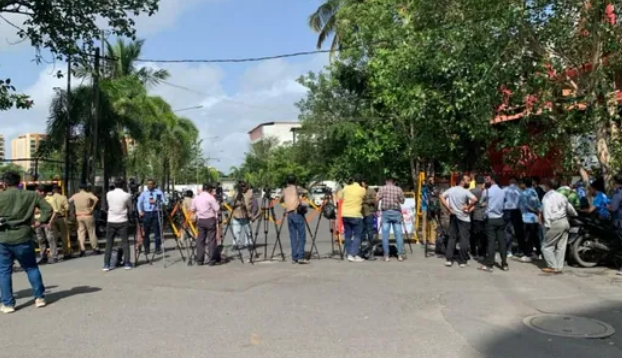 Two Shiv Sena leaders on Tuesday met the sulking Minister Eknath Shinde, who is at the centre of the new political crisis in Maharashtra, for two hours at the hotel this evening.

As Maharashtra’s ruling coalition battles for survival in Mumbai, some 280 km away in Surat in BJP-ruled Gujarat, a luxury hotel situated at Dumas Road of the diamond city in the BJP-ruled Gujarat, has become the focus of all attention.

The hotel has been turned into a virtual fortress with nearly 400 policemen guarding it since early Tuesday morning. The property is currently hosting rebel Shiv Sena Minister Eknath Shinde and some rebel party MLAs.

Reports said guests who had arrived earlier are leaving one by one and the hotel has stopped accepting new bookings for an indefinite period.

The BJP’s Maharashtra unit president, Chandrakant Patil, said that the party is open to forming a government with Shinde.

The attendance was less-than-robust in today’s afternoon meeting that meants it was not a significant show of strength.

Calling it Sena’s internal matter, the former Union Minister and the NCP chief Sharad Pawar was already clarified that there is no threat to their Shiv Sena-led Maharashtra Vikas Aghadi (MVA) government.

Udhav Thackeray’s MVA government in Maharashtra, consisting of three parties – the Sena, the Congress and Sharad Pawar’s NCP – was put together in 2019 by the NCP chief Sharad Pawar.

Shinde is an influential leader in Maharashtra and more popular from Thane for his active politics in the area and also serves as minister for Urban Development and Public Works.

Stay off Twitter, focus on game: Here’s why Graeme Smith said this to Gujarat Titan all-rounder