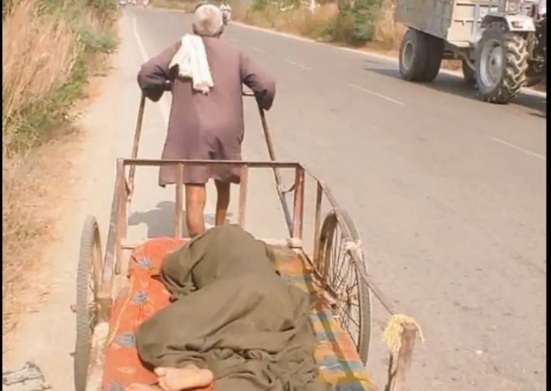 After the video went viral, the Uttar Pradesh Deputy Chief Minister, Brajesh Pathak has ordered a probe into the matter and also tweeted about the incident. After getting the information and taking cognizance of the viral video, Health Director-General has been asked to probe the incident and take strict action against those responsible, Pathak, who holds the health ministry portfolio, tweeted in Hindi.

Ballia Chief Medical Officer (CMO) Neeraj Pandey has identified the man carrying his wife on a handcart as 58-year-old Sakul Prajapati, a resident of Andaur village in Chilkhar block of Ballia district of Uttar Pradesh. On 28 March, 2022, Prajapati took his wife to a health centre, 3 Km away from his home – on a handcart as he was unable to find a ride, he said.

Prajapati reached the hospital after pulling his wife on a handcart for hours but the doctors had only given them some medicines and referred his wife to the district hospital. He then left his wife on the cart at Piyaria village and returned home to take clothes and money and then took her to the hospital on a mini-truck, the CMO also said.

Sharing the screenshot of the news, the Samajwadi Party chief Akhilesh Yadav tweeted that the BJP government in Uttar Pradesh is not spending enough on the health sector. The taxpayer’s money is being spent on false advertisements based on BJP’s achievements in the health sector in UP which had seen huge improvement during the SP rule. The life of the people, who are dying due to lack of stretchers and ambulances under the BJP government, could have been saved, Yadav said in a tweet in Hindi.

Bengaluru: 22-year-old man stabbed to death by three youths including two Muslims for not speaking Urdu

Delhi: Heatwave to intensify from today, likely to touch 40 degrees