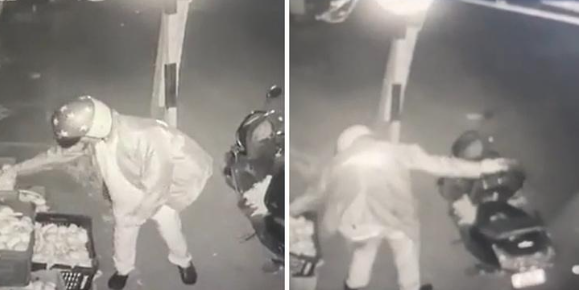 A viral video has been circulating on every social media platform, where a cop who is supposed to keep the community safe, is found stealing mangoes at midnight from Kerala’s Kanjirappally.

The accused was identified as Shihab who was reportedly a police officer at the Idukki AR camp stationed. His offense was recorded on the CCTV camera which was installed in that area. After his video got viral on Internet, area police took charge of the situation and booked him under Section 378 of the IPC.

In the viral video, the accused cop can be seen on the two-wheeler, completely unaware that he was under CCTV surveillance. He was even seen checking his surroundings before committing the offense. After finding the street empty, he took a few mangoes, put them in his vehicle’s boot space and left the spot on his vehicle.

The report says he has stolen somewhere around 10 to 12 KGs of mangoes.

Police revealed that initially, they were dealing with difficulties in finding the accused’s identity as he was wearing the helmet throughout the video. But after closely monitoring the video, police were able to track him with the help of his scooter’s number, which was quite visible in the video.

Currently, the accused is on the run. Police have already transferred the matter to the concerned team in order to nab him as soon as possible.

This is not the first time such news come into the limelight. Earlier, a cop from Uttar Pradesh’s Bareilly was found stealing apples from a street vendor. Later, on the complaint of the shop owner, he was suspended for a few days from his duty for his actions.