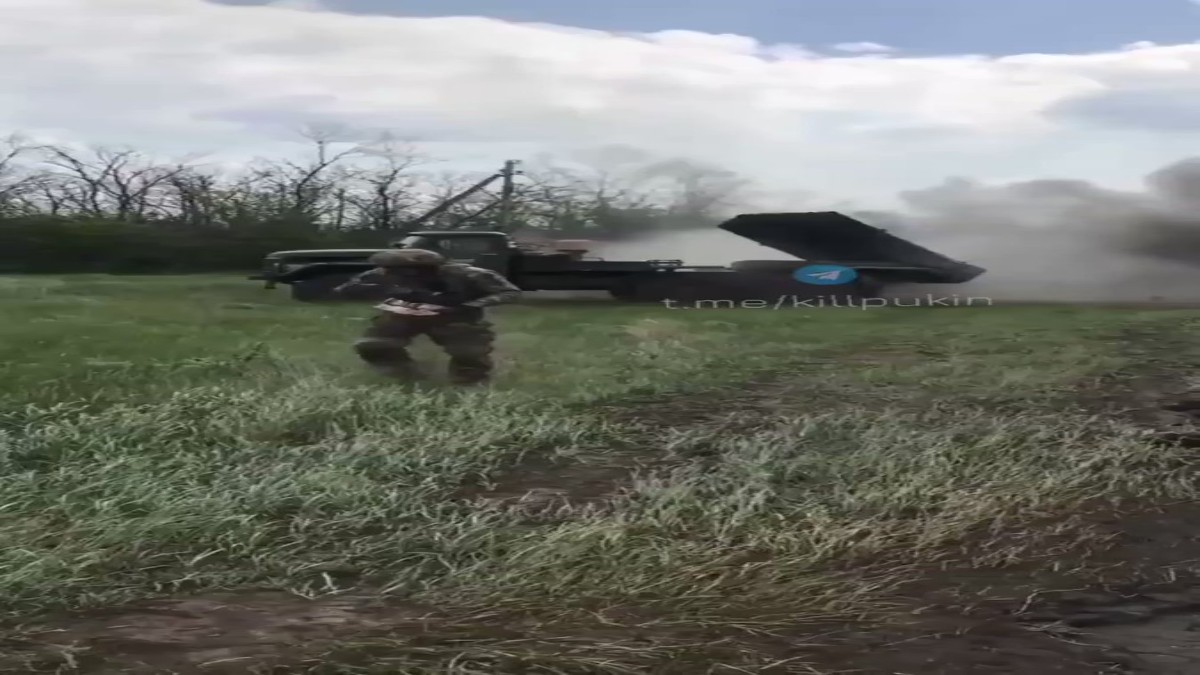 A Ukrainian soldier can be seen stuffing his mouth with the snack as he moves away from a missile-launching vehicle in the video.

We get terrified whenever we hear words like missile launches, firearms, or bomb explosions, but what about those who face this for real? They keep themselves confined to safe places in order to struggle for their lives. But one video of a soldier munching on chips while missiles are fired behind him has gone viral.

A video of a snack-loving Ukrainian soldier is making the rounds on the internet. The soldier can be seen stuffing his mouth with the snack as he moves away from a missile-launching vehicle in the clip. Wearing his uniform, the soldier appears entirely unconcerned. He seems unconcerned as the vehicle in the background fires missiles one after another.

The bizarre video is shared on Twitter by Defence Reporter for the Kyiv Independent, Illia Ponomarenko with the caption ‘Advertising chips Suite’. Since uploaded, the video has garnered around 50k views and is gaining a lot of attention from the users.

One of the users wrote When you are confident enough that your Machine Learning model will work on production as well..no war please. Another wrote When you are badass enough to munch on a bag of chips while firing rockets at enemy targets.

Me ignoring my life falling apart, said another user. That’s what TRANQUILITY really looks like, said the fourth user. The fifth user commented, What a photo! What a photographer! What a soldier! What a nation!

The soldier was commended for having the guts to consume a bag of chips while casually walking around near a military vehicle that was firing missiles into the air.

Others, on the other hand, argued that the video was normalizing war’s horrors, as one user put it: “The sense of normalcy that this conflict is developing is horrific.”

Another person wrote, No way, I’m sorry, my love for chips has faded, which is why I can’t be so hasty. This guy is a pro, and the cameraman is a beast, therefore this is a fantastic photo. The world boxing champion and the table tennis veteran, Nikhat Zareen and Sharath Kamal have been fittingly named as India’s flag bearers by the Indian Olympic Association for the closing ceremony in Birmingham. The closing ceremony will take place today, on August 8 after all the matches will finish.

Sharath has won gold in the finals of table tennis singles against England’s Liam Pitchford. He has had a stellar campaign in Birmingham and today he won his seventh commonwealth games gold. The 40-year-old has been rightly appointed as the main flag bearer of India.

For the unversed, Sharath Kamal is a veteran table tennis player and has 13 Commonwealth games medals to his name. He played an influential role in India’s team event and inspired the team to the Gold. This time Sharath partnered with the young Sreeja Akula to increase India’s medal tally in Birmingham CWG 2022.

Meanwhile, after winning gold at the world boxing championships in May, Nikhat Zareen went on to show why she holds the title of the world boxing champion. Throughout her CWG 2022 campaign she kept the winning streak alive and also clinched a gold in the women’s 48 kg category of boxing on Sunday by beating Northern Ireland’s Carly McNaul. Being a topnotch athlete, Zareen deserves to be bestowed with the responsibility of being the flagbearer for the Birmingham CWG 2022 closing ceremony.

The Flagbearers for the inaugural ceremony were two-time Olympic and one CWG gold medalist PV Sindhu and Indian men’s hockey team skipper Manpreet Singh. Earlier Tokyo Olympic gold medallist Neeraj Chopra was all set to the Indian flagbearer at the opening ceremony but due to his groin injury he was ruled out of the tournament.

India’s run at this edition of CWG has come to an end. And by making a mark on the global map, India is seated at the fourth position out of 72 on the Birmingham CWG 2022 medal tally. India has won 22 golds and 61 medals in total, while Australia leads the table with 177 medals and 67 golds.

Richa further explained how the couple are very excited to get married but are worried about COVID hence they want to design their plans while being mindful about the ramifications involved. Bollywood actors Richa Chadha and Ali Fazal are all set to get married this September. The Masaan actor has finally come out with her wedding plans in an interview with News18.

Richa Chaddha and Mirzapur’s Ali Fazal have been planning their wedding since 2020, but Covid had other plans for them which made them postpone their wedding during that time.

The duo made headlines when they announced their relationship back in 2017 as they attended the premiere of ‘Victoria and Abdul’ in Venice.

Richa’s response to the question about her wedding plans was vague but she further went on to explain the despondence she felt when she wasn’t able to get married as pandemic came into play. The duo were supposed to elope in 2020 and had even made most of the arrangements. However, the Pandemic didn’t make it easy for anyone to carry out their lives as planned, not even Richa and Ali’s.

Richa further explained how the couple is very excited to get married but are also worried of the pandemic and it’s restrictions. Hence they want to design their plans while being mindful about the ramifications involved. She remarked that she wouldn’t want to make the headlines for the wrong reasons.

She further expressed the couple’s frustration about their jam-packed schedule as they both have been busy after things took a turn towards normalcy and the work resumed in full force. The star said jokingly that they’d have to take a live production job by taking combination dates and making sure the wedding happens this year.

When asked about the wedding season in Bollywood, Richa said that she initially didn’t understand it but after witnessing all the celebrity wedding in the recent times, she understands how watching pictures of celebrities getting married can be a thing for people to be fascinated about, adding that everyone wants to see some happiness and joy.

Ali and Richa will be starring together in their stint of Fukrey 3. The Madam prime minister star has been taking Kathak dance lessons for her upcoming project, Heeramandi, with Sanjay Leela Bhansali. Meanwhile, Ali Fazal is busy with the third season of the most anticipated wed series of India, Mirzapur, in his celebrated role of Guddu Bhaiya.

The first week of the premier league season was Jam-packed with a lot of action and a nail biting performance by the teams and players, with a pinch of disappointment. The first week of the premier league season was Jam-packed with a lot of action and nail biting performances by the teams and players but it also came with a pinch of disappointment.

The inaugural match of this season was played between Crystal Palace and arsenal, where Arsenal clinched away the match from Crystal palace by 2-0. The new signees came through, inspiring Mikel Arteta’s side to win as Martinelli opened the goal bank in the initial 20 mins and Saka forced an own goal with a deflection.

Fulham and Liverpool both found themselves in a tie with Liverpool stuck in a pickle as they struggled to score in the first half while also conceding within the first 35 minutes. Jurgen Klopp’s side managed to redeem themselves in the second half as the new signing, Nunez, announced himself with a goal following Saka’s cross forcing an own goal.

Tottenham eased past Southampton dominating the away team with 4-1 victory over Southampton. The first goal came from the away side by James Ward-Prowse’s goal but Antonio Conte’s side found back their rhythm as Ryan Sessegnon, Eric Dier, Dejan Kulusevski found themselves on the scoresheet. Mohammed Salisu’s own goal also became an ending remark to their game.

Everton took a loss against Chelsea, as the penalty specialist Jorginho drilled a penalty for the blue in the extra time of the first Half.

Bournemouth pulled away from Aston Villa 2-0 with the help of Jefferson Lerma and Kieffer Moore. Lerma’s goal was the fastest goal in the matchday as he scored a goal in just 2 minutes. Moore’s goal also added to Bournemouth’s lead. Steven Gerrard, manager for Villa, remarked that they lacked quality.

Wolves took a loss against Leeds Wolves 1-2 with the help of Daniel Podence and an own goal by Rayan Ait-Nouri. Podence’s early opener gave the wolves the lead which was answered by Rodrigo. However, despite Leeds being the dominating side in the second half; Rayan Ait-Nouri’s own goal contained Leeds.

Newcastle defeated Nottingham Forest 2-0 as Fabian Schar and Callum Wilson found their names on the scoresheet at St James’ Park.

On the day 2 of the matchday, Leicester drew a 2-2 with Brentford as T Castagne scored in the 33rd minute and K Dewsbury-Hall scored in the 46th minute for Leicester. Brentford responded in the later part of the game with help of I Toney’s 62nd minute goal and the equalizer from J Dasilva in the 87th minute.

The between newly appointed, Erik Ten Hag, with the start of their campaign against Brighton became an underwhelming start for Manchester United. Pascal Gross became a nightmare for the red army by scoring twice before half-time. Manchester United sparked hope for a comeback after Alexis Mac Allister’s own goal but failed to follow through.

The defending Champions started their campaign on a good note with the newly signed, Haaland scoring twice against West Ham. Pep Guardiola praised the team’s performance as an exceptional team performance.

Aston Villa will face Everton and Arsenal play against Leicester on the coming Saturday.