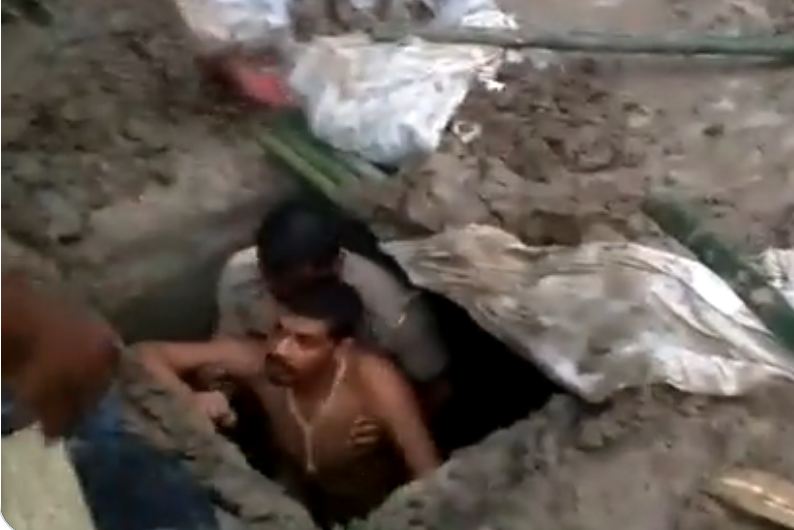 Uttar Pradesh police on Tuesday rescued a man, who was duped into taking samadhi allegedly by a local sadhu in Unnao, from a pit covered with bamboo and mud.

A video of the police rescue operation is doing rounds on social media.

In the video, the Uttar Pradesh police officials can be seen removing the dirt and bamboo covering under which the man was buried.

The police officials rushed to the spot as soon as they get the information about the matter and hurriedly got the young man out.

Three priests from Tajpur village in Unnao convinced a young man to take samadhi underground. They had told the youth that he would achieve enlightenment if he took samadhi a day before the Navratra festivals began. They encouraged him to take ‘Bhu Samadhi’.

Shubham Goswami, a resident of Tajpur village of Asiwan police station area, took samadhi in a six feet deep pit on Navratri. However, his father Vineet Goswami was also involved in digging his son into the pit.

All four people, Shubham Goswami, father Vineet Goswami and the priests Munnalal and Shivkesh Dixit have been arrested by the police. While others, who were involved in the incident, fled the spot after the police rushed to the spot.

Shubham, who was living in a hut outside the village for about five years, was presented in court after a medical examination, from where he has been sent to jail.

The youth had entered the 6-feet pit on Sunday evening. After getting the information, the villagers informed the police about the incident and rushed to the spot soon.