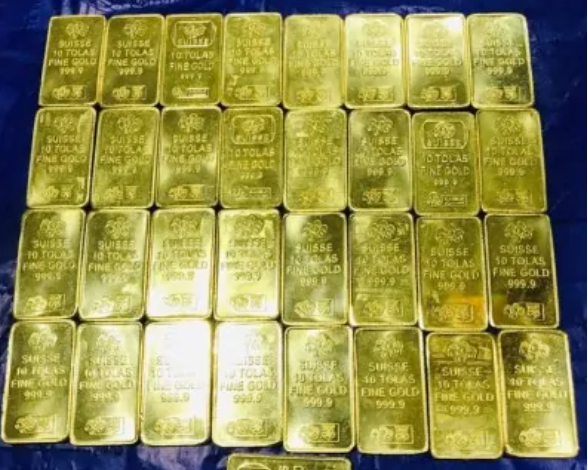 In a high-speed chase in Lucknow on Tuesday, revenue department officials seized 77 smuggled gold biscuits weighing about 9 kg from two passengers who returned from Saudi Arabia. The officials recovered 77 gold biscuits that had been hidden in their belts and pockets in their undergarments.

As per the intelligence input, the biscuits were to be handed over to people at the Chaudhary Charan Singh International Airport, who would then proceed towards Muzaffarnagar.

The Officials of the Directorate of Revenue Intelligence in Lucknow had received information that two passengers arriving from Saudi Arabia capital Riyadh would smuggle gold biscuits.

As per the information, the officials of DRI Lucknow kept an eye on the suspects once they landed in Lucknow. What followed was a high-speed pursuit of two SUVs on the Agra-Lucknow expressway. When the DRI officials finally intercepted the vehicles, the two passengers from Riyadh and those who had come to receive them were found inside.

Following a detailed investigation, the DRI said the main handler was arrested in Lucknow. A Customs hawaldar, who allegedly connived with the smugglers in getting them gold through the airport, has also been arrested.

The great UP renaming march stops at Kasganj, demands raised for calling it Kalyan Singh Nagar