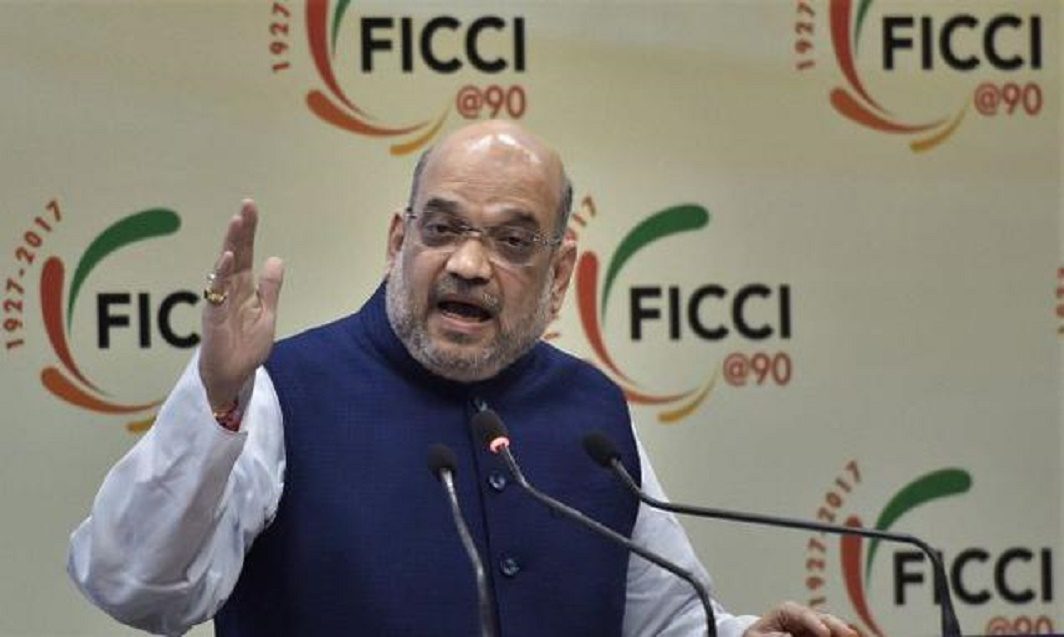 [vc_row][vc_column][vc_column_text]BJP national president tells FICCI that dip in GDP growth to 5.7 per cent was due to “technical reasons”

At a time when Reserve Bank of India’s (RBI) report stating that 99 per cent of demonetised notes had been deposited with various banks has unleashed renewed criticism of Prime Minister Narendra Modi’s maverick move, BJP national president Amit Shah, on Saturday, pitched a new defence of noteban, asserting that it had expanded India’s “formal economy”.

Addressing an interactive session organised by the Federation of Indian Chambers of Commerce and Industry (FICCI) in New Delhi on Saturday, Shah said: “I definitely believe that the formal economy has increased due to demonetisation. Money lying at various places is now part of the economy.”

Asserting that declaring Rs 500 and Rs 1000 notes as no longer legal tender was a “hard decision” taken to boost the Indian economy and that the BJP doesn’t link policy decisions with vote bank, Shah said: “We have taken some decisions for which we have faced severe criticism. But let me make one thing clear that BJP’s Narendra Modi government does not believe in taking decisions that just appear good to people, but it believes in taking decisions that are actually good for people.”

While Prime Minister Modi and his government may have also faced flak for offering different figures of new tax payers brought under the income tax net in the past three years – and especially since demonetisation – Shah didn’t shy away from giving his own numbers.

“Those people who are asking about the benefits of demonetisation, I would like to tell them that since independence, we were able to add only 3.7 crore in our tax payer base…In last three years, we have increased the number of taxpayers from 3.7 crore to 6.3 crore. This shows that our economy is growing, and our transparency is also growing, but for this, some of the difficulties have to be faced right now,” the BJP president said.

Shah, however, conceded that the BJP “may have faced” or could face in the future some “political losses” due to demonetisation but qualified his statement by saying that it was a risk that the party was willing to take “in the interest of the country”.

He also asked the business community to “encash” the “Brand India” built by the government globally and claimed that the NDA dispensation’s most significant contribution was that it had transformed the “scale of thinking“.

The Modi government was focusing on long-term goals rather than short-term gains, Shah said, adding that direct benefit transfers now reach 36 crore people from 8.5 crore in 2014 and saved over Rs 59,000 crore in subsidies. Earlier, this money would have disappeared due to corruption, he said.

Shah also played down the dip in the GDP growth rate to 5.7 per cent in the last quarter, saying it was due to some “technical reasons” and added it had gone up to 7.1 per cent after falling to 4.7 per cent in 2013-14 when the UPA was in power.

The BJP president also touched upon the issue of banks’ non-performing assets (NPAs), seen as a drag on the economy, saying the Modi government had inherited these bad loans and none of them happened during its tenure. It was a very “courageous move” of the Modi dispensation to ask banks to bring NPAs to their books, he said.

“The issue (of NPAs) is looked at politically. But I want to make it very clear that none of these loans which turned NPAs were offered during our government. Opposition targets us saying so many accounts have turned into NPAs. But not a single account is from our time. We have inherited it,” he said.

The Union government along with states had taken over 7,000 decisions to increase the ease of doing business, he said, adding: “Some critics of our government claim that development has stalled but I would like to tell them not to look at statistics but travel around to find development.”[/vc_column_text][/vc_column][/vc_row]