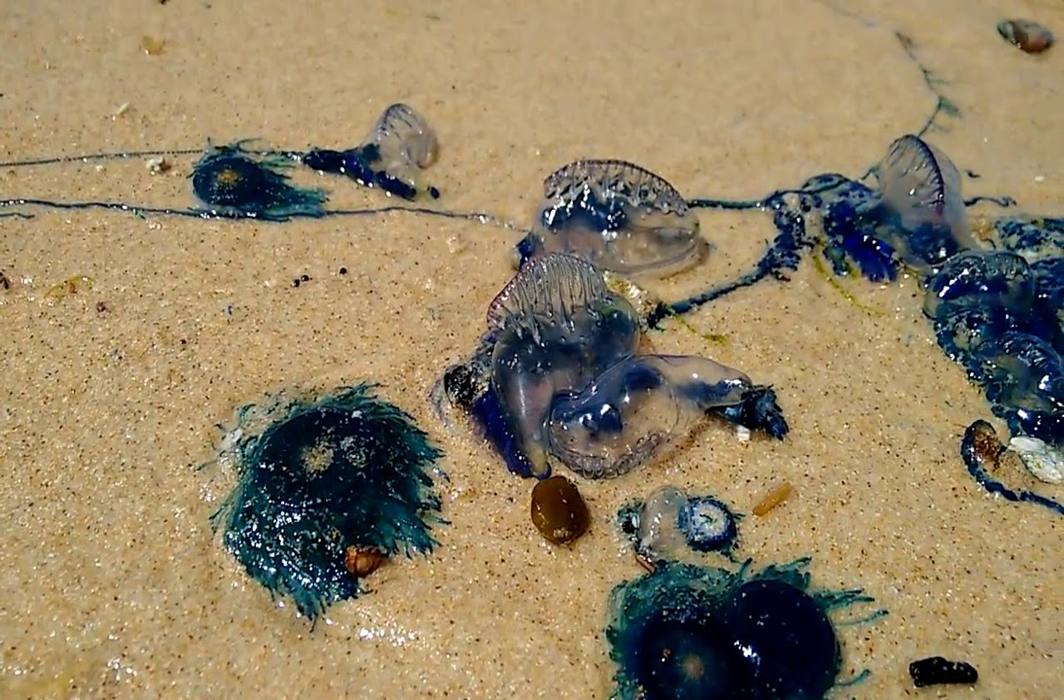 There is panic and fear on beaches of Mumbai as over 150 persons visiting the sea side were injured in attacks by blue bottles, also known as Portugese Man O’ War, that have landed in large numbers.

The Portuguese man-of-war has long tentacles, which enter the body and deliver an excruciatingly painful sting. The venomous sting can kill fish, but not humans, said a News18 report.

Anyone who comes in contact with tentacles can receive a sting causing burning pain leading to muscle weakness. These tentacles can even sting if the organisms are dead.

Blue bottles look like plastic or a bubble when washed ashore. They also float in water and have tentacles that cause the sting, a report in the DNA said.

The Portuguese Man-of-War belongs to the Physaliidae family and is commonly found in the Atlantic, Pacific and Indian Oceans.

The name “man-of-war” originated from an 18th-century armed sailing ship. They live at the surface of the ocean, therefore, during strong winds, they are driven onto beaches.

Despite their appearance, they are not like jelly fish, the DNA reported. They are not one individual but a colony of four kinds of highly modified zooids that are dependent on one another for survival.

Based on their appearance, however, people refer to them as ‘blue bottle jellyfish’.

Since August 2, around 150 people have been reportedly been stung by the blue bottles on beaches like Girgaum chowpatty, Juhu and Aksa as per the lifeguards, said a DNA report. While many reported mild irritation many including children had developed rashes and were experiencing burning sensation.

Locals said that the blue bottles are generally seen in Mumbai, during the mid-monsoon season every year, but this time they were spotted in unusually large numbers.

A shopkeeper at Juhu Beach said that around 150 people have been attacked by the blue bottles in past two days. “The beach is full of jellyfish. Many people have been injured, from the past two days. I am helping them by rubbing lemon when they are stung. I suggest, people should avoid visiting beach for now,” NDTV quoted him as saying.

Volunteers of Marine Life Of Mumbai (MLOM) a group of marine enthusiasts, are visiting beaches and creating awareness amongst the lifeguards about basic dos and don’ts to help the victims who have been stung, DNA reported.

Shaunak Modi, marine enthusiast who is part of the MLOM and met the lifeguards at Juhu was quoted as saying, “Most of us were shocked on seeing videos and images of people rubbing lemon, ice and trying other methods to help many victims including children who were stung at Aksa beach on Saturday and hence we decided to meet up with lifeguards who in many cases are the first responders and tell them basic do’s and don’t’s.”

They told the lifeguards patrolling the beach to keep it simple and at most pour sea water on the affected portion of the skin, which will help remove the tentacles that are stuck on the skin and ask the victim to head to the nearest government hospital.

“Rubbing anything on the skin can cause the tentacles to go deeper into the skin and aggravate the problem. Since the effect of venom is different on people depending on age, body weight and other factor hence the best way to deal is to send those affected by the sting to the nearest hospital,” he said.

Scientists indicate that rising temperatures of oceans could be one of the key factors behind the population boom, said a report.

Marine ecologist and Director of BNHS Dr Deepak Apte was quoted by DNA as saying that earlier Blue bottles that live in deeper oceans would be found washed ashore in the beginning of monsoons due to strong winds and currents and were seen for a fewer days. However, there is an obvious change in not only their arrival but also their numbers and while there have been no study, yet the trend is a clear indicator.

“Global warming is resulting in warmer oceans including that of Arabian sea, which makes the situation conducive for their breeding thus increasing their numbers and it would not be a surprise to find a rise in the number of blue bottles being washed ashore in years to come,” he said.

Former principal scientist at Central Marine Fisheries Research Institute (CMFRI), Dr Vinay Deshmukh informed that in the last three decades the temperature of Arabian sea has increased by 0.8 degree Celsius and while it might mean nothing for us but even this slight change has far reaching impact on the marine organisms and if there is a population boom of blue bottles its obvious that they will be washed more in numbers along the coast.

Deshmukh said that there has been rise in numbers of blue bottles showing up on beaches across several countries including Australia and a proper answer would require a longer study and data collection.

Another senior marine scientist said that it was something to be worried about as increase of any species indicates something is wrong in the ecosystem.

“Their rising numbers indicates that chances are that their predators have reduced and if one observes closely over fishing, pollution in the ocean is affecting many species including turtles, who prey upon these and keep their population in control,” he said.