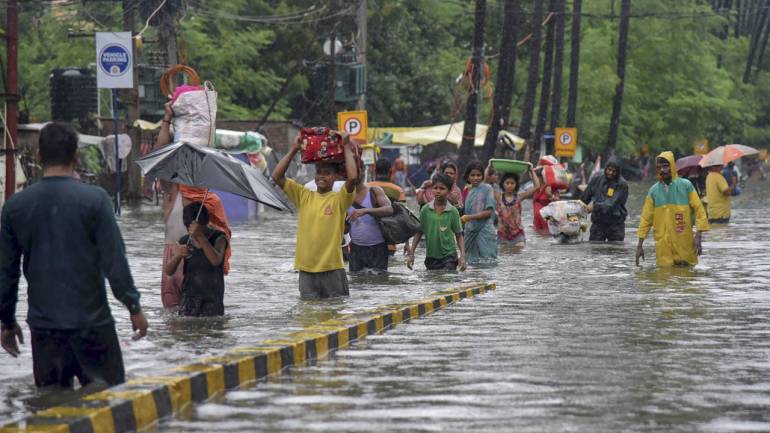 [vc_row][vc_column][vc_column_text]The BJP and Janata Dal United leaders in Bihar got into a blame game after the ongoing Flood killed more than 70 people across the state and left large parts of the capital Patna submerged, with water levels failing to recede even four days after the rain stopped, NDTV reported.

Residents have described the situation as a “living hell” with malfunctioning water pumps hampering drainage operations and carcasses of dogs and pigs floating around the city, sparking fears of a disease outbreak.

The blame game erupted after the BJP leader and Union Minister Giriraj Singh, a long-time critic of Chief Minister Nitish Kumar stated the state authorities had not been sufficiently ready for the floods.

“The government issued an alert asking people to be on guard. But was it on guard itself? Had it been so, people would not have been forced to suffer misery,” Singh said on Wednesday, October 3.

Giriraj Singh’s comment comes after Chief Minister Nitish Kumar, on Wednesday said drainage operations in Patna by the BJP-controlled Urban Development Ministry were “far from satisfactory” and that he would personally monitor the situation.

He was supported by Bihar BJP President Sanjay Jaiswal, who accused Kumar’s government of “administrative negligence” in a Facebook post, according to news agency PTI. Another BJP leader, Minister of State Ashwini Choubey, was similarly critical.

The Chief Minister, whose leadership of the fragile BJP-JDU alliance in the state has come under pressure with Assembly elections expected next year, also hit out at critics, accusing them of “doing publicity and propaganda”.

“I am dedicated to janhit (public welfare) and not to publicity. I don’t believe in doing publicity and propaganda. Those who don’t work only do publicity,” he said.

JDU leaders have hit back by reminding their alliance partners (BJP) that they, in fact, control key administrative and planning posts for the state and Patna, such as the Mayor’s office and the Urban Development and Health Ministries.

JDU leader and Industries Minister Shyam Razak also accused BJP leaders of grandstanding in front of potential voters with one eye on next year’s polls.

The Chief Minister, who had to face a swarm of angry residents in Patna on Tuesday, earlier drew a parallel to the floods in Mumbai, for which he was criticized by junior BJP spokesman Nikhil Anand, who reminded Kumar that flood waters in Mumbai receded quickly.

Bihar is expected to hold Assembly elections next year and the floods, which Nitish Kumar described as a “natural calamity”, have provided BJP leaders looking for a change of leadership in the state with early campaign ammunition.

Kumar, who has come under pressure from BJP leaders looking for a change of leadership in the state, said last month that the NDA would secure more than 206 seats it won in 2010 polls, despite those “trying to do internal sabotage”.

According to the government, the floods have hit 959 villages across 15 districts. Around 21.45 lakh people have been affected. 45 relief camps and 324 community kitchens have been set up and more than 1,000 boats have been deployed.

In addition to flooded streets and houses, carcasses of dogs and pigs floating across the city have given rise to health concerns. Civic officials have begun removing these but their progress is slow.

The Flood situation in Bihar is likely to worsen as the weather department predicted a light to moderate showers to continue for the next three to four days. The reason can be attributed to Cyclonic Circulation over Jharkhand and adjoining Bihar along with a Trough extending from East Uttar Pradesh to Northeast India across Bihar, Skymet Weather reported.

Areas like Rajendra Nagar and Kankarbagh remain submerged for the eighth day on Friday, October 4. Rajendra Nagar, one of the worst hit areas, is under four feet of stagnant water adding to the misery of locals.

Therefore, the upcoming showers may worsen this situation, thus posing a great threat to already waterlogged areas. The situation may remain grim in the state for another week or so.

‘The river Ganga had already breached its banks and the water level is expected to rise further, considering chances of more rains’, Skymet Weather said.

The heavy rains have claimed 73 lives so far.

Several people have alleged that there was no arrangement from the government to provide drinking water and food, though the administration said it has brought in heavy duty pumps to flush out water, the situation has not improved much. [/vc_column_text][/vc_column][/vc_row]

Maharashtra Election 2019: “Congress will lose all But 3-4 seats in Mumbai”, predicts Sanjay Nirupam