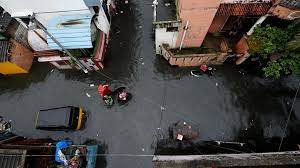 The low-pressure region over the Bay of Bengal has consolidated into a depression, which will most certainly cross the coast by tonight.

In several parts of the region, it is raining very heavily without any interruptions. The parts which are mostly affected by this non-stop rain are particularly the northern districts of Tamil Nadu.

Also, Chennai and nearby Chengelpet, Kancheepuram, Tiruvallur and Villupuram are also being affected very badly.

Which flights are cancelled at Chennai airport?

All flight arrivals are cancelled because of the heavy rain and wild crosswinds, while the departures of the flight will be continued, says Chennai airport.

Deaths due to heavy rainfall in Tamil Nadu

According to reports, at least 14 people have died in this incident because of the constant heavy rainfall, people are afraid of floods now. Hence, on Thursday, a red alert has been issued in extreme rainfall parts of Tamil Nadu including northern Chennai, Tiruvallur, Kancheepuram, Ranipet, Villupuram, Chengelpet and Cuddalore districts by The India Meteorological Department (IMD).

The Chennai Corporation states that stormwater drains are not constructed for heavy rains, they can only bear the normal yearly rains. After torrential rains pounded many parts of Tamil Nadu on Wednesday, the city must be reconfigured to become climate-resilient as severe weather generally become more frequent.

Today on November 11, 2021, several roadways in Chennai were flooded. Due to waterlogging on rail tracks, pedestrians were diverted across the city when the traffic police closed at least seven roadways and 11 subways.

Some metropolitan trains were suspended, while others were delayed. Flight operations were normal, according to the Airport Authority of India, and additional measures were taken at airports due to the bad weather.