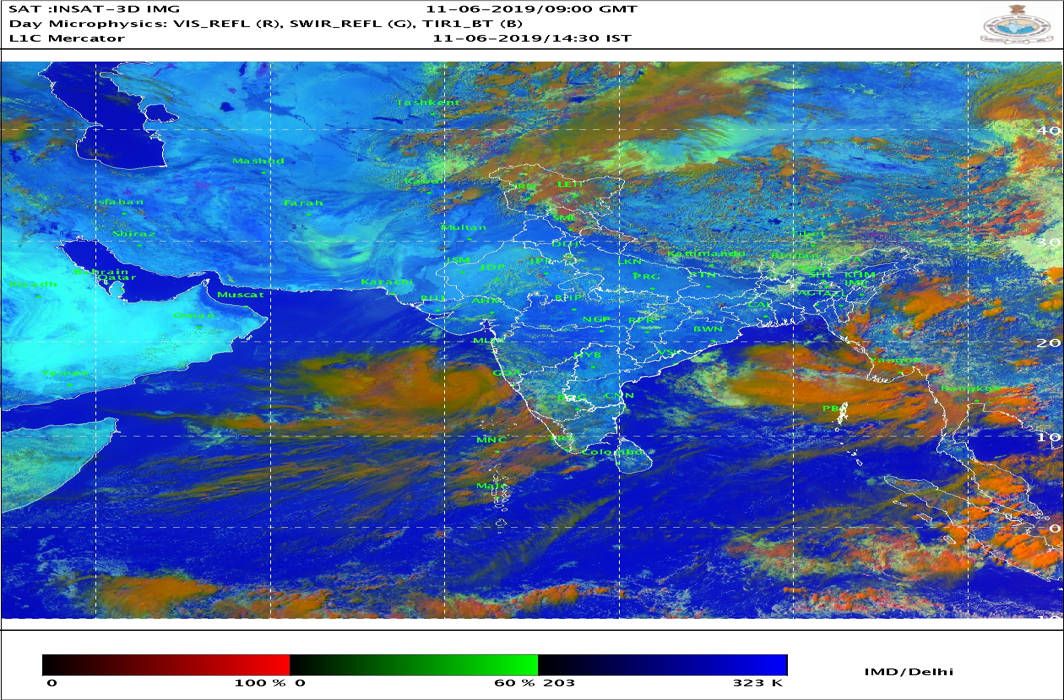 [vc_row][vc_column][vc_column_text]A storm that developed near Lakshadweep islands over Arabian Sea is likely to develop into a severe cyclonic storm by tomorrow (Wednesday, June 12) while heading north-northwest towards Gujarat and bringing widespread rain all along India’s western coast, the met department said.

The cyclone is likely to delay further the already delayed monsoon as it would suck away moisture from it and delay its progression. This means the heat wave affected areas in central and north India would continue to swelter for a longer period.

Today morning, the storm attained the strength of a cyclone which has been called ‘cyclone Vayu’, a name given by India. The storm will peak on Thursday, June 13, with winds gusting up to 135 kmph over the sea.

It is expected to hit Gujarat coast on June 13. A heavy rainfall warning has been issued in parts of Gujarat in the next few days. Mumbai will also get affected by cyclonic storm Vayu, but not severely.

Cyclonic storm Vayu is very likely to move nearly northward and cross Gujarat coast between Porbandar and Mahuva around Veraval and Diu region with windspeed going up to go up to 110-120 kmph gusting to 135 kmph on June 13 early morning, the Indian Metereological Department (IMD) said.

Cyclone Vayu is expected to draw moisture away from the monsoon, which is likely remain stalled over the next few days. “Progress of the monsoon seems unlikely till June 15-16 because the cyclone will drag moisture away. It may move a bit through northeast India but major progress isn’t expected in that region too during this period,” said media reports quoting D Sivananda Pai, head of IMD’s long range forecasting.

The weatherman has put across an ‘orange message’ for south Gujarat region on June 12, which warns authorities to be prepared.

“Mumbai will also be affected Cyclone Vayu but not severely. The cyclone is expected to cross from 250-300 km away, parallel to the Mumbai coast tomorrow, early morning. A cyclonic warning has been issued for fishermen and people living near the coastline,” KS Hosalikar, Mumbai weather official was quoted as saying to news agency ANI.

With cyclonic storm intensifying into a severe cyclone Vayu, places like Jamnagar, Somnath, Porbandar, Dwarka and Nailiya in Kutch would be impacted. It could even herald pre-monsoons rain across Gujarat.

Cyclone Vayu is likely to halt the northward progression of the monsoon for a few days. The arrival of the monsoon has already been delayed, hitting the Kerala coast on June 8 instead of June 1.

The cyclone is expected to interfere with normal progression, by sucking all the moisture from the monsoon winds towards itself. Cyclones are sustained by very strong low-pressure areas at their core. Winds in surrounding areas are forced to rush towards these low-pressure areas.

The places where the monsoon has already reached would continue to get rain, mainly along the western coastline, but other areas would have to wait a little longer.

Rescue operations on after AN-32 crash site spotted