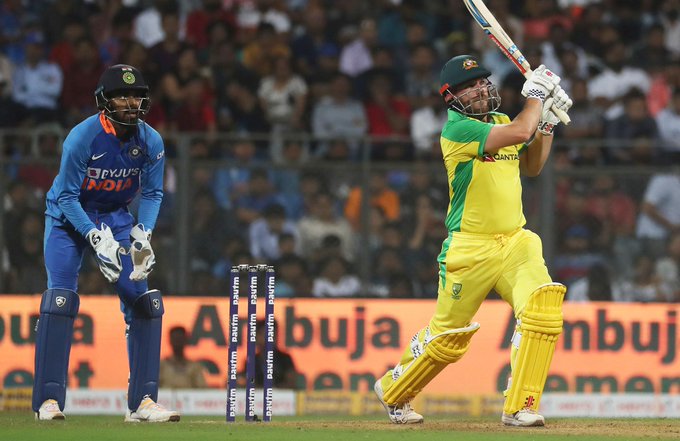 David Warner, Aaron Finch starred with the bat as India were outplayed by Australia in all departments of the game and lost the first ODI by 10 wickets at the Wankhede Stadium in Mumbai.

Put in to bat first, India were going well at 134/1 with Shikhar Dhawan (74) and KL Rahul (47) taking the game away from Australia. But the Australians led by left arm seamer Mitchell Starc pulled things back and took quick wickets to put brakes on the scoring rate.

In the middle overs, Rishabh Pant (28) and Ravindra Jadeja (25) got the starts, but couldn’t capitalise on it as the lower order was choked by the visiting bowlers.

India were bowled out for 255 runs in the last over with Dhawan and Rahul being the prime contributors.

Chasing a modest target of 256 runs on a flat deck in Mumbai, Australian skipper and opener Aaron Finch got going from the start. He played some exquisite cover drives and punches.

Other opener David Warner took some time to settle down, but once he got into his groove, he punished the Indian bowlers by smacking them all across the ground.

Indian bowlers had a disappointing outing as none of them could break through the Aussie openers.

Warner was the first of the two to bring up the century, notching his 18th ODI ton and the third against India.

He scored an unbeaten 128 runs off 112 balls that included 17 boundaries and three maximums.

Australia beat India in a comprehensive manner as the duo hit the winning runs in the 38th over.

Their unbeaten partnership of 258 runs was the second highest partnership for Australia in ODIs.

This was also the first time in 15 years at India lost an ODI by 10 wickets.