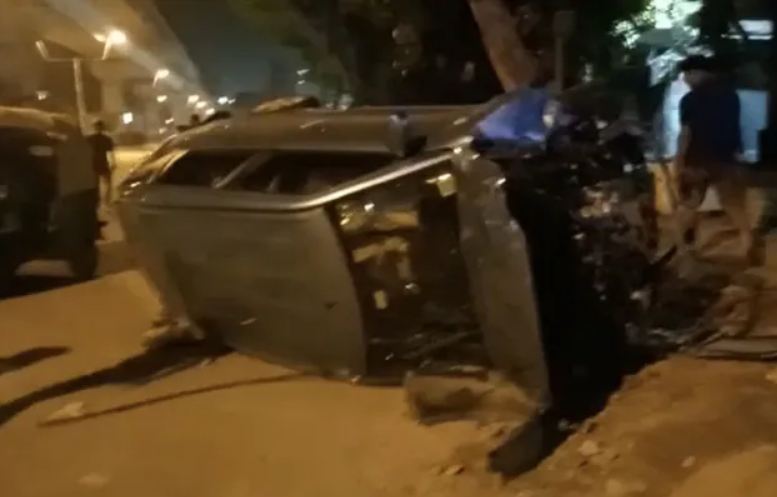 A Zomato delivery man and two teenagers died after a speeding car collided with a bike in northeast Delhi’s Shakarpur area last night. At least three people were killed and several others got injured in the incident.

The incident took place near Vikas Marg when a family of around seven members was returning to Karkardooma from Peeragarhi area of Delhi.

The Delhi Police briefed the media that the young woman and 6 others, who were sitting in the car, were returning from Peeragarhi in west Delhi to their home in Karkardooma. The speeding Wagon R car collided with a two-wheeler and overturned near Walia Nursing Home, the police also said.

A total of 7 people, 3 were sitting in the front and 4 were at the back of the car.

When the car was passing through Laxmi Nagar, the Zomato delivery man on his bike came in the way and the car’s driver lost control as he was trying to steer clear, the reports said.

Those stuck inside the overturned car were pulled out by the local residents of the area and rushed to a hospital where Jyoti, 17, and Bharti, 19, were declared dead by the doctors.

The car and the Zomato delivery boy’s two-wheeler have been badly crushed in the incident.

Police have registered a case and further investigation is underway. The Zomato delivery man is yet to be identified, the Delhi Police said.

The man was seriously injured after the accident and was rushed to a nearby hospital. Hospital authorities told them that no bed was available and as they were trying to arrange a bed, the delivery partner died, the local residents of the area said.

The accident comes a month after Zomato launched a 10-minute food delivery feature, prompting concerns about rash driving and the safety of delivery partners.