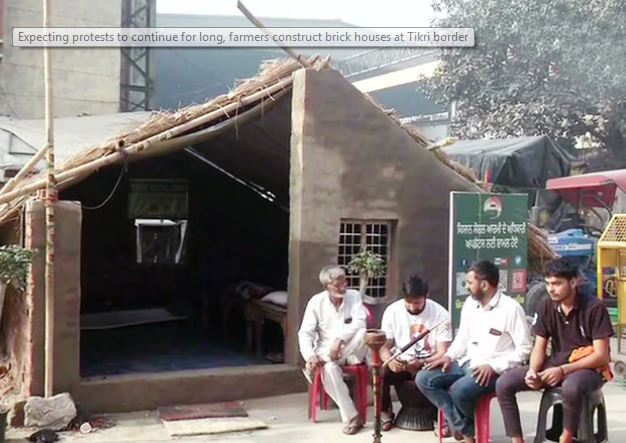 The farmers, who have been protesting against the Centre’s agricultural law for over three months, have started building pucca houses on the highways at Delhi-Haryana’s Singhu and Tikri borders.

After withstanding winter, internet ban, and efforts by the government to stop their protest, the farmers are now preparing to strengthen their agitation for a long period of time. Their decision to shift from temporary shelters to brick houses is guided by the weather as they try to protect themselves from scorching heat in the upcoming summer months.

There have been several constructions at the Delhi-Haryana’s Singhu border, which made it look like a mini-village of Punjab. Earlier, gyms and salons were reportedly coming up at the site of farmers’ protests, but now, pucca houses are being built by the farmers at the Singhu border.

There are reports that farmers are planning to install ACs in these pucca houses to protect the elderly and women protesters from heat.

Few permanent shelters have also been constructed by the Kisan Social Army near Delhi’s Tikri border. Kisan Social Army leader, Anil Malik said that these houses are strong, permanent just like the will of the farmers. He further informed that 25 houses have been built so far and they have a plan to build 1000-2000 similar houses in the coming days. If the temperatures increase, we will place coolers in the vicinity for comfort. We hope that the Centre withdraws these farm laws, he added.

A member of Samyukta Kisan Morcha said they are planning to complete the construction within three weeks and will accommodate 10-15 people in each house. Farmer leader Manjit Rai said these pucca houses will remain until the three laws are withdrawn.

When asked about the construction at protest sites, Delhi Police said that since the structures are on the Haryana side of the border, it cannot take action.

While Jhajjar District Collector Jitendra Kumar said that he SDM and DSP, Bahadurgarh spoke to the farmers today and told them not to build pucca structures anymore, to which they agreed.

A Haryana Police officer also said that they have asked the farmers at Tikri to stop construction and they agreed. But we have not taken any action against the structures that have been already built. We will do so if we get orders, the police official added.

Meanwhile, the farmers’ agitation against the three new farm laws has been going on for the last 106 days at different borders of Delhi. To mark the completion of four months of their agitation, the farmers have called for another ‘Bharat Bandh’ on March 26.