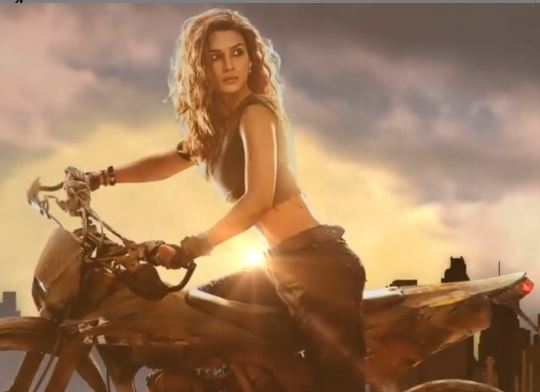 After Heropanti, Bollywood actor Kriti Sanon is all set to reunite with actor Tiger Shroff for the upcoming action-drama Ganapath. The actor shared her first look of her character Jassi from the film on Wednesday.

Kriti took to Instagram to announce her association with the project. Sharing her first look, the actor introduced her character Jassi. Super duper excited for this one, teaming up once again with very special Tiger Shroff, can’t wait for the shoot to begin, she captioned the photo.

In the poster, Kriti sported a raw and rugged look, riding a bike and looking backwards. She looked uber cool in a black top and green cargo pants.

Ganapath will be helmed by Vikas Bahl and jointly bankrolled by Jackky Bhagnani and Vashu Bhagnani’s Pooja Entertainment, Vikas Bahl and Deepshikha Deshmukh. The film is all set for 2022 release. It will go on floors soon, the pre-production for which has already commenced.

Talking about the film, Kriti said that she is thrilled to reunite with Shroff after a gap of seven years and also to be directed by Vikas in a space that is so new to her.  The 30-year-old actor has been wanting to explore the genre of action for a while now and she is super excited to do so on such a massive scale with Pooja Entertainment. She was glad to start her journey with a passionate producer, Jackky and with such a cool character, Kriti said in a statement.

A day before, Tiger Shroff had teased his fan by sharing a precursor to his co-star’s look.The makers of the film shared a poster and asked the fans to guess who the actress is.

Last year in November, Tiger announced his collaboration with the team of Ganapath. He shared a motion poster and captioned it as, this one is special for me, and especially for you guys! Presenting #Ganapath – get ready for more action, thrill and entertainment.