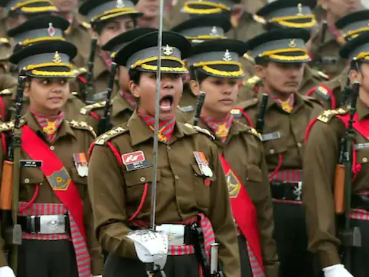 Former Uttar Pradesh Minister in the previous Samajwadi Party government, Gayatri Prajapati on Friday was sentenced to life imprisonment in a Chitrakoot gangrape case. Along with Gayatri Prajapati, accomplices Ashish Shukla and Ashok Tiwari were also sentenced to life terms.
He and his two accomplices have also been fined Rs 2 lakh. The former UP Minister, who was a key figure in the previous Akhilesh Yadav government, was convicted by a special court of lawmakers on Wednesday for raping a woman.
The special court in Lucknow had two days back pronounced Prajapati guilty in the gang rape case, and had also convicted his two associates.

The Central government on Friday agreed to grant permanent commission (PC) to 11 women Army officers who meet the eligibility criteria after the Supreme Court threatened to initiate contempt proceedings.

The Centre, which was initially reluctant, conveyed its acquiescence to a Bench led by Justice D.Y. Chandrachud to grant PC to the officers within 10 days.

The National Investigation Agency (NIA) on Friday filed the chargesheet against seven Naxals and conspirators in the Dummugudem Maoist case of Telangana.
Top members of banned CPI (Maoist) hatched a criminal conspiracy along with overground workers to wage war against the government by carrying out attack on security personnel, said NIA

Top Maoist leader Prashant Bose alias Kishan Da, who was carrying a bounty of Rs 1 crore on his head, has been arrested in Jharkhand along with his wife Sheela Marandi, a senior police officer said on Friday.

Health workers will knock at every door, check, inspire and motivate under Har Ghar Dastak, says Manohar Agnani, Additional Secretary, Union Health Ministry during an online interactive session on the ongoing Har Ghar Dastak campaign.
He said: “80 percent of the single-dose and 39 percent of the double doses of Covid-19 covered.
He said: “Every individual has a role, we’ve requested NGOs too. By November 30 we should reach our goal. We have 3 vaccines Covaxin, Covishield and SputnikV.”

The Congress on Friday has written to Facebook CEO Mark Zuckerberg claiming Facebook is spreading hate and demanded an internal inquiry.

It is not the first time that Congress has written to the social media giant. In earlier letters to Zuckerberg, the Congress raised issues of bias with many Facebook executives asked to set up a high-level inquiry into the Facebook India leadership team and submit a report to Facebook Inc. within a reasonable period of time. A Wall Street Journal report in August 2020 had said Facebook India’s leadership had supported the ruling BJP and violated the company’s own hate-speech rules. Following the story, the executive responsible had resigned in October 2020.

The rupee strengthened by 7 paise to close at 74.45 (provisional) against the US dollar on Friday, as a firm trend in domestic equities boosted investor sentiments.
Besides, lower crude prices in the international market also supported the local unit, forex dealers said.

Covaxin recently received emergency use approval from the World Health Organization (WHO) for people aged 18 and above. Earlier on November 10, Hong Kong and Vietnam also joined the list of countries that approved the jab.

The Aam Aadmi Party on Friday released the first list of 10 candidates for the 2022 Punjab Assembly polls. This is the second such announcement by a political party in the state. Earlier on Sunday last, the BJP announced that it will contest all 117 seats in the Punjab Assembly elections 2022.

After meeting Sonia Gandhi, Sachin Pilot says those who worked for party should be given the respect they deserve

Congress leader and former Rajasthan Deputy CM Sachin Pilot met Congress president Sonia Gandhi at her residence on Friday. After the meeting, Pilot said those who have worked for the party should be given the respect they deserve.

Pilot said he spoke about the political situation in the state, and said that if there was any change required, it should be done. Pilot met Sonia Gandhi a day after Rajasthan Chief Minister Ashok Gehlot.

The Delhi government on Friday imposed a fine of Rs 5 lakh on the National Building Construction Corporation Ltd (NBCC) for flouting anti-dust norms at its construction site in Karkardooma, Delhi Environment Minister Gopal Rai told the media. Earlier in October, the Delhi government issued a show-cause notice to the NBCC for not following the 14-point anti-dust guidelines at its World Health Organization (WHO) building redevelopment site in the capital.

133 terrorists including many top commanders neutralised in Jammu and Kashmir so far in 2021, says IGP Kashmir Vijay Kumar

Kashmir Inspector General of Police Vijay Kumar on Friday said 133 terrorists including many top commanders have been neutralised this year. He said: “Two terrorists including Shiraz Molvi and Yawar Bhat have been neutralised.” Shiraz was active since 2016 and was involved in several civilian killings. One other terrorist killed in the Srinagar encounter has been identified as Aamir Riyaz, he added.

Maharashtra Minister Nawab Malik has launched a scathing attack on Bollywood actor Kangana Ranaut for her controversial remarks on the country’s Independence and demanded that the Padma Shri award conferred on her should be revoked.
The Nationalist Congress Party leader said the actor seemed to be speaking untruths.

In a study published in The Lancet, Covaxin, the coronavirus vaccine developed by ICMR and Bharat Biotech, was found to have a 77.8 percent efficacy rate against symptomatic Covid-19. The study also found it to be 65.2 percent effective against the more dangerous Delta variant of the coronavirus in its preliminary analysis, but said further investigations are necessary to confirm it.

Tired of dark circles? Know what causes them and learn how to get rid of them permanently