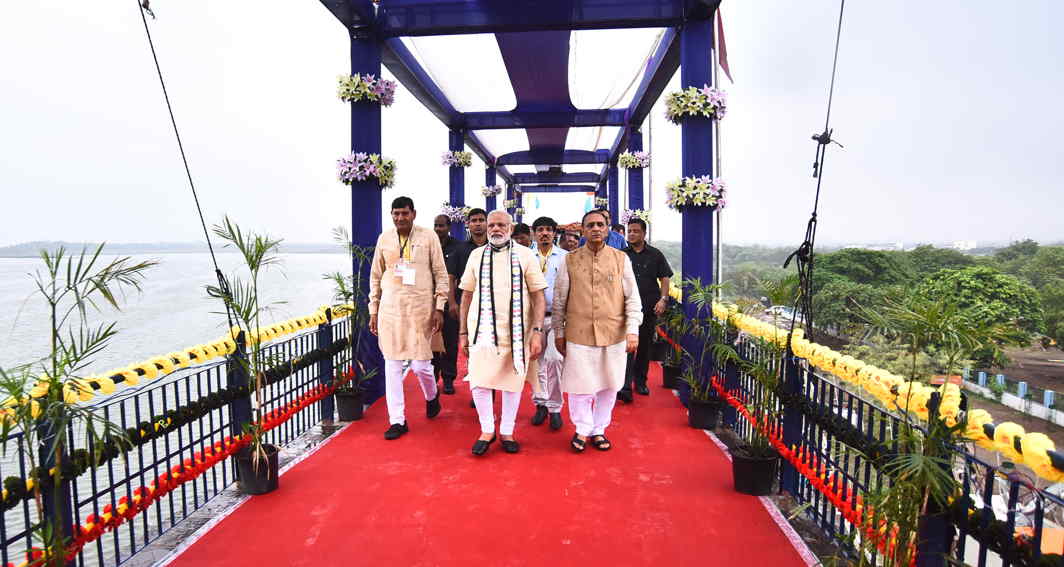 After inaugurating the dam, PM Modi headed to Sadhu Bet, an island in the river Narmada, to review the construction of a 182-metre-tall statue of Sardar Vallabhbhai Patel – called the ‘Statue of Unity’ – and a memorial complex dedicated to the country’s first Home Minister.

The foundation stone of Sardar Sarovar Dam was originally laid by former PM Pandit Jawahar Lal Nehru six decades ago on April 5, 1961, while the construction could start in 1987. The Sardar Sarovar Dam is ranked second biggest in the world after Grand Coulee Dam in the United States.

PM Modi started his day on Sunday morning by seeking blessings from his mother Heeraben. Prime Minister was forced to proceed to the dam site by road as helicopter flight was cancelled due to bad weather.

Meanwhile government’s decision to go ahead with the dam project was opposed by large number of affected villagers. Narmada Bachao Andolan leader Medha Patkar, along with 36 dam affected people continued their Jal Satyagraha  protest at Chota Barda village in Dhar, about 350 km southwest of Bhopal. The protesters kept themselves partly in the water caused by the growing water level. They were demanding complete rehabilitation of displaced villagers.

The Jal Satyagraha began on Friday on the Narmada river banks where water level is rising consistently. The protesters claimed that the inhabitant families in the villages were affected by rising water levels post closure of gates of Dam on Narmada in neighboring Gujarat.

The Sardar Sarovar project has been mired in controversies.  The Narmada Bachao Andolan (NBA), led by social activist Medha Patkar, has been protesting against the project, raising several environmental concerns. In 1996, construction on the dam was suspended following a stay by the Supreme Court which later allowed resumption of   construction work after four years.  It is speculated that one town and 192 villages will submerge under water after the water level rises in Sardar Sarovar Dam.

Meanwhile BJP is celebrating the PM Modi’s birthday as Sewa Diwas across the country.[/vc_column_text][/vc_column][/vc_row]