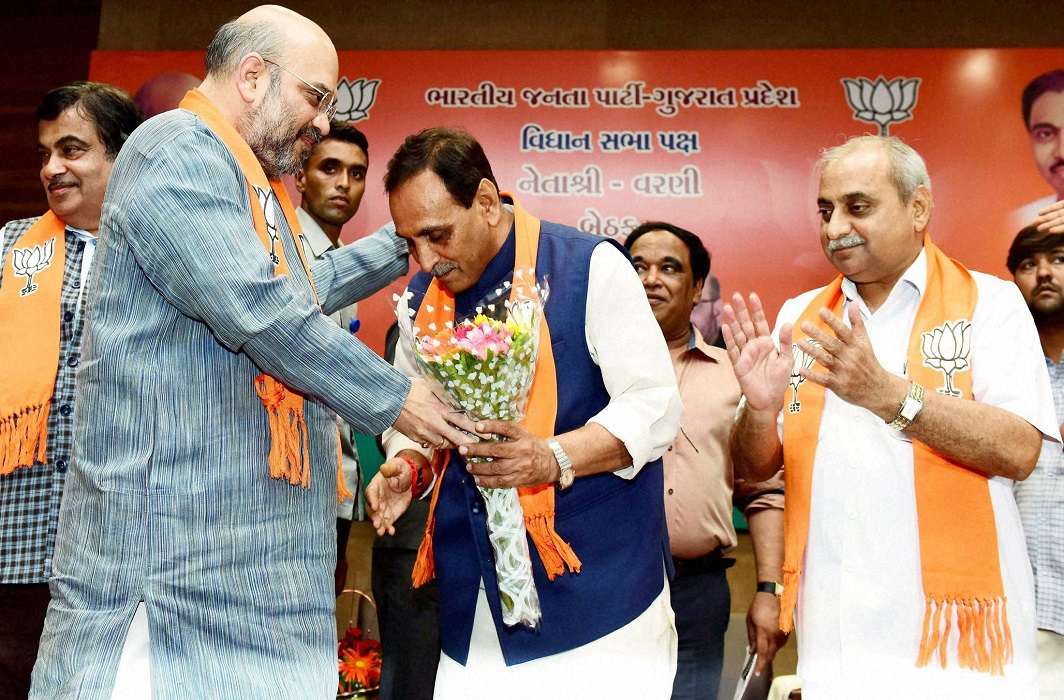 [vc_row][vc_column][vc_column_text]BJP leadership has successfully resolved Gujarat Deputy CM Nitin Patel’s dissatisfaction by allotting him Finance portfolio and avoided any possibility of political uncertainty. He will assume office on Sunday, the weekly holiday and the last day of the year 2017.

While talking to ANI Sunday morning Patel said, “I will go to Secretariat and take charge of the ministries today. I have been assured that I will be given suitable departments, I also talked to Amit Shah ji over the phone. I thank him for the assurance.”

Differences were surfaced within three days after Vijay Rubani’s cabinet sworn-in to form the state government. Deputy CM Nitin Patel was miffed at being given a “light weight” portfolio.He did not turn up to office on Friday for taking the charge of the allocated departments.

Earlier he had expressed his displeasure and did not take charge of the departments allotted as Deputy Chief Minister. Other cabinet colleagues took charge on Friday.  He was unhappy over being stripped of his key portfolios including Finance, he was heading in the previous government.

The Deputy CM was earlier allotted portfolios of Health and Family Welfare, Medical Education, Roads and Buildings, Narmada, Kalpasar and Patnagar Yojana.  The two important departments he was heading were allotted to other ministers. The finance portfolio was initially allotted to Saurabh Patel, while CM Vijay Rupani had kept the urban development department to himself.

Though Patel did not express displeasure publicly, a local Gujarati TV channel had on Saturday quoted him saying that he had conveyed his grievances to the party high command and that it would take the appropriate action.

Nitin Patel was at one point was being considered to replace Anandiben Patel as state’s CM. But at the last minute and Vijay Rupani was made the CM. Nitin Patel is senior to Rupani and enjoys a Patidar community support.

Earlier, Lalji Patel, convener of the Sardar Patel Group (SPG)  has reportedly said,  “The BJP is repeatedly doing injustice to Nitin-bhai Patel. Today I met him with supporters from Mehsana, and we have given a call for Mehsana bandh on January 1 in his support.”

Meanwhile Patidar leader Hardik Patel had extended olive branch to Nitin Patel to quit BJP with 10 MLAs and “join the Congress”.  He had indicated that if this materialises congress will be able to form the government in the state.

He was quoted saying, “As a veteran politician, Nitinbhai (Patel) worked hard for 27 years to ensure that (the BJP) stays in power. The community members need to understand that such politicians are being sidelined. I am not giving any suggestion, but asking him to ponder as to why he is not being given respect despite working so hard. I would request Nitinbhai to join us and together we will fight against the arrogant people (of the BJP)… If Nitinbhai makes up his mind and says he is ready to resign from the party and that 10 more MLAs are ready to tender their resignation, we are ready to fully support him.”

Political observers understand that sensing the possibility of the ensuing political crisis in Gujarat, BJP leadership has resolved the issue quickly and satisfied Natin Patel before he could take any otherwise decision.[/vc_column_text][/vc_column][/vc_row]