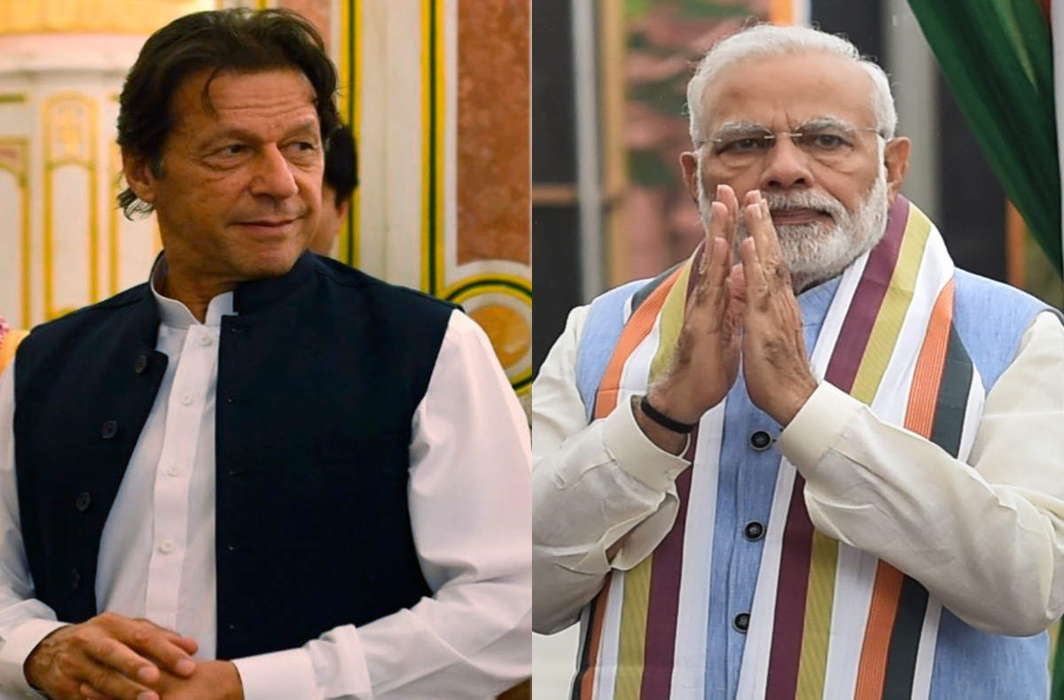 [vc_row][vc_column][vc_column_text]Pakistan Prime Minister Imran Khan has written to Prime Minister Narendra Modi seeking resumption of dialogue between the two neighbours, saying the only way forward for the two countries is through “constructive engagement”.

Khan said the countries owe it to the people to find a peaceful solution to outstanding issues, including the Jammu and Kashmir dispute.

PM Modi had written to Khan on August 18 after he was sworn in as Prime Minister. In the letter to Khan, Modi conveyed India’s commitment to pursue “meaningful” and “constructive” engagement with Pakistan and emphasising the need to work for a terror-free South Asia.

Referring to the PM as ‘Modi Sahab’, he said Pakistan remains ready to discuss terrorism. India has made it clear to Pakistan on several occasions that ties and terror would not go together.

In the letter to Modi, Khan wrote: “We, however, owe it to our peoples, especially the future generations, to peacefully resolve all outstanding issues, including the Jammu and Kashmir dispute, to bridge differences and achieve a mutually beneficial outcome.”

In the letter dated September 14, the cricketer-turned-politician proposed a meeting between Foreign Minister Shah Mehmood Qureshi and his Indian counterpart Sushma Swaraj on the sidelines of the UN General Assembly in New York this month.

“Building on the mutual desire for peace between our two countries, I wish to propose a meeting between Foreign Minister Makhdoom Shah Mahmood Qureshi and External Affairs Minister Sushma Swaraj, before the informal meeting of the SAARC foreign ministers at the sidelines of the upcoming UN General Assembly in New York,” Khan wrote.

The two ministers (Qureshi and Swaraj) could explore the way forward, Khan said, adding that the SAARC Summit in Islamabad “will offer an opportunity for you to visit Pakistan and for us to re-start the stalled dialogue process.”

The Pakistan Tehreek-e-Insaf (PTI) chief thanked Prime Minister Modi for his “warm greetings” and best wishes on his assumption of charge as the Prime Minister of Pakistan.[/vc_column_text][vc_raw_html]JTNDYmxvY2txdW90ZSUyMGNsYXNzJTNEJTIydHdpdHRlci10d2VldCUyMiUyMGRhdGEtbGFuZyUzRCUyMmVuJTIyJTNFJTNDcCUyMGxhbmclM0QlMjJkYSUyMiUyMGRpciUzRCUyMmx0ciUyMiUzRVBha2lzdGFuJTIwUHJpbWUlMjBNaW5pc3RlciUyMEltcmFuJTIwS2hhbiUyNiUyMzM5JTNCcyUyMGxldHRlciUyMHRvJTIwUHJpbWUlMjBNaW5pc3RlciUyME5hcmVuZHJhJTIwTW9kaS4lMjAlM0NhJTIwaHJlZiUzRCUyMmh0dHBzJTNBJTJGJTJGdC5jbyUyRjJGWlJjaTNkNTAlMjIlM0VwaWMudHdpdHRlci5jb20lMkYyRlpSY2kzZDUwJTNDJTJGYSUzRSUzQyUyRnAlM0UlMjZtZGFzaCUzQiUyMEFOSSUyMCUyOCU0MEFOSSUyOSUyMCUzQ2ElMjBocmVmJTNEJTIyaHR0cHMlM0ElMkYlMkZ0d2l0dGVyLmNvbSUyRkFOSSUyRnN0YXR1cyUyRjEwNDI2ODE0MTUyNDUwMjkzNzYlM0ZyZWZfc3JjJTNEdHdzcmMlMjU1RXRmdyUyMiUzRVNlcHRlbWJlciUyMDIwJTJDJTIwMjAxOCUzQyUyRmElM0UlM0MlMkZibG9ja3F1b3RlJTNFJTBBJTNDc2NyaXB0JTIwYXN5bmMlMjBzcmMlM0QlMjJodHRwcyUzQSUyRiUyRnBsYXRmb3JtLnR3aXR0ZXIuY29tJTJGd2lkZ2V0cy5qcyUyMiUyMGNoYXJzZXQlM0QlMjJ1dGYtOCUyMiUzRSUzQyUyRnNjcmlwdCUzRSUwQQ==[/vc_raw_html][/vc_column][/vc_row]