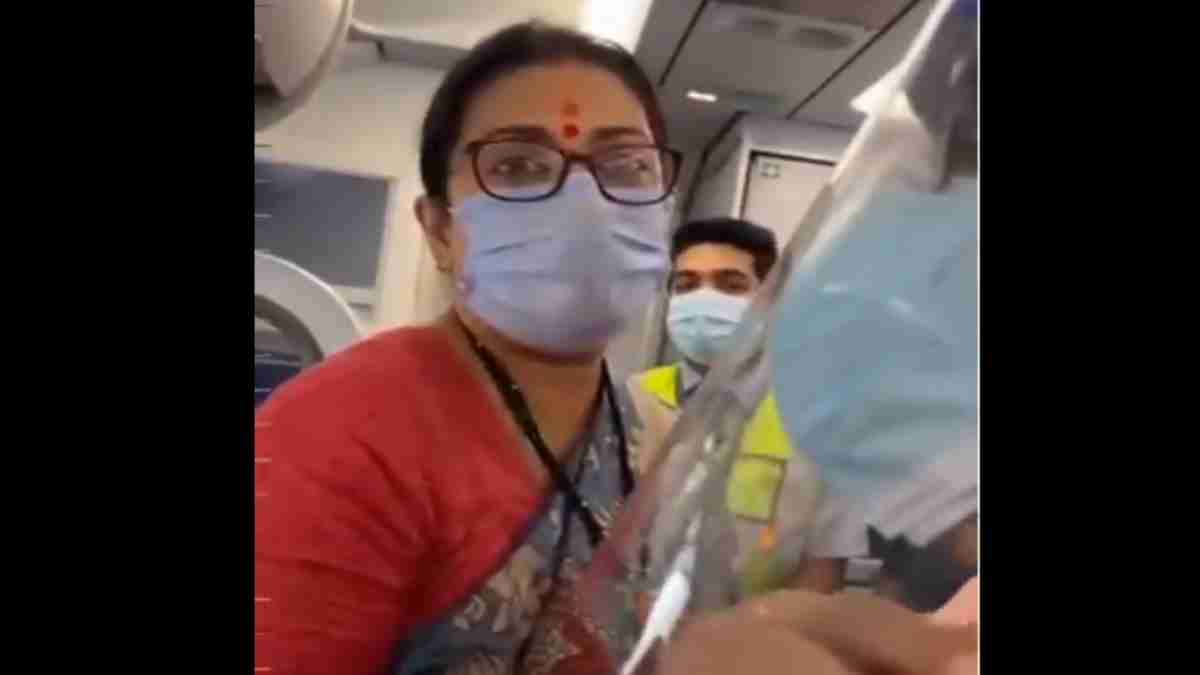 A video is doing rounds on social media wherein Union Minister Smriti Irani is questioned by Mahila Congress President Netta D’Souza in flight over the fuel prices hike across the country.

The interaction between the two took place on a Guwahati-bound flight on Sunday. In the verbal tiff, the Congress leader can be heard wishing Irani Happy Bihu without stoves, without gas, and increased rates. Irani pointed to the leader that she is blocking the way for other passengers to deboard.

Replying to the D’Souza’s confrontation, Smriti Irani said that the government is helping the poor through social welfare schemes and also providing free Covid-19 vaccines to everyone. Irani also said that she is being accosted.

Sharing the video on Twitter, Netta D’Souza wrote that she faced Modi Minister, Smriti Irani en route to Guwahati and when asked about unbearable rising prices of LPG, Irani blamed vaccines, raashan, and even the poor. She further also requested users to watch the video excerpts and her reaction to common people’s misery.

Speaking to Hindustan Times, Netta D’Souza said that she was disappointed by Smriti Irani’s reply and that the government can’t justify the doubling of gas or fuel prices by administering vaccines and distributing ration cards. Further, she argued that in 2014 before the BJP came to power, gas rates spiked from Rs 415 to Rs 435 and back then Irani actively protested against the hike.

Fuel rates in India have begun hiking since March 22 after the results of five Assembly elections. On Friday, the Reserve Bank of India reviewed its monetary policy and raised its inflation forecast for the current fiscal year 2022-23 from 4.5 per cent to 5.7 per cent. On Sunday, Petrol prices in Delhi are Rs 105.41 per litre, while in Mumbai they are at Rs 120.51 per litre. Diesel prices in Delhi and Mumbai remained unchanged at Rs 96.67 per litre and Rs 104.77 per litre, respectively.

Related Topics:Smriti Irani
Up Next