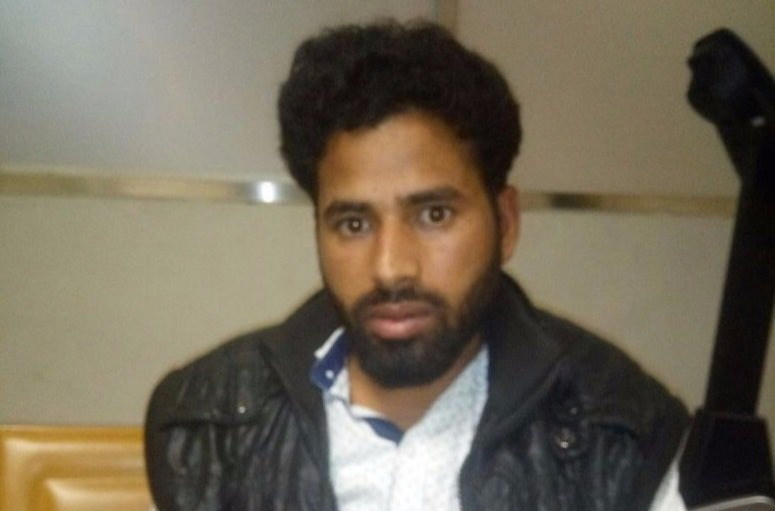 [vc_row][vc_column][vc_column_text]Based in Riyadh, Abu Zaid allegedly used to radicalize youth on social media and motivate them to join terror group

In a major crackdown against the spread of terror activities in the country, the Uttar Pradesh Anti- Terrorism Squad (ATS) on Sunday arrested a suspected IS functionary Abu Zaid, in Mumbai – while he was returning from Saudi Arabia.

Addressing the media in New Delhi, Anand Kumar – the Assistant Deputy General (Law and order) – said, “Abu Zaid, suspected ISIS terrorist was arrested by the ATS team from Mumbai Airport yesterday after he came from Saudi Arabia. He will be brought to Lucknow on a transit remand and will be produced in the court. We will take him in police custody for interrogating him.”

Based in Riyadh, the IS operative allegedly used to radicalize youths through a group in social media – and motivate them to join the Islamic States militant outfit.

Information on Zaid cropped up during the interrogation of recently arrested terror-suspects. In April this year, the ATS had arrested four suspected ISIS terrorists – Umar alias Nazim, Ghazi Baba alias Muzammil, Mufti alias Faizan and Jakawan alias Eihtesham – from Bijnore and Western UP.

Reportedly, Zaid was in regular contact with the detained terrorists. “They used to talk via an application on the Internet and Zaid was their ideologue,” said ADG Kumar.

Following several tip-offs from various sources, Zaid – who was on look out by the anti-terror department – was arrested by DSP Anup Singh at the Mumbai airport.[/vc_column_text][vc_raw_html]JTNDYmxvY2txdW90ZSUyMGNsYXNzJTNEJTIydHdpdHRlci10d2VldCUyMiUyMGRhdGEtbGFuZyUzRCUyMmVuJTIyJTNFJTNDcCUyMGxhbmclM0QlMjJlbiUyMiUyMGRpciUzRCUyMmx0ciUyMiUzRVdlJTIwaGF2ZSUyMGFycmVzdGVkJTIwYSUyMHRlcnJvciUyMHN1c3BlY3QlMjBBYnUlMjBaYWlkJTIwZnJvbSUyME11bWJhaSUyMGFpcnBvcnQlM0ElMjBBREclMjAlMjhMTyUyOSUyMEFuYW5kJTIwS3VtYXIlMjAlM0NhJTIwaHJlZiUzRCUyMmh0dHBzJTNBJTJGJTJGdC5jbyUyRjhvMDBWWms5Vk0lMjIlM0VwaWMudHdpdHRlci5jb20lMkY4bzAwVlprOVZNJTNDJTJGYSUzRSUzQyUyRnAlM0UlMjZtZGFzaCUzQiUyMEFOSSUyMFVQJTIwJTI4JTQwQU5JTmV3c1VQJTI5JTIwJTNDYSUyMGhyZWYlM0QlMjJodHRwcyUzQSUyRiUyRnR3aXR0ZXIuY29tJTJGQU5JTmV3c1VQJTJGc3RhdHVzJTJGOTI3MDc2ODg5MzY5MzA5MTg0JTNGcmVmX3NyYyUzRHR3c3JjJTI1NUV0ZnclMjIlM0VOb3ZlbWJlciUyMDUlMkMlMjAyMDE3JTNDJTJGYSUzRSUzQyUyRmJsb2NrcXVvdGUlM0UlMEElM0NzY3JpcHQlMjBhc3luYyUyMHNyYyUzRCUyMmh0dHBzJTNBJTJGJTJGcGxhdGZvcm0udHdpdHRlci5jb20lMkZ3aWRnZXRzLmpzJTIyJTIwY2hhcnNldCUzRCUyMnV0Zi04JTIyJTNFJTNDJTJGc2NyaXB0JTNFJTBB[/vc_raw_html][vc_column_text]Earlier on Thursday, the Kerala police stated that six suspects from Kannur – including three youths belonging to the Popular Front of India (PFI) – have joined the Islamic States militant outfit in Syria.

On October 25, the Valapattinam police arrested three men – Mithilaj, Abdul Razzak and Rashid – with suspected links to the IS. According to latest reports, almost 100 Indians are active members of the ISIS in Iraq and Syria.[/vc_column_text][/vc_column][/vc_row]

Related Topics:ISISMumbaiUttar Pradesh
Up Next