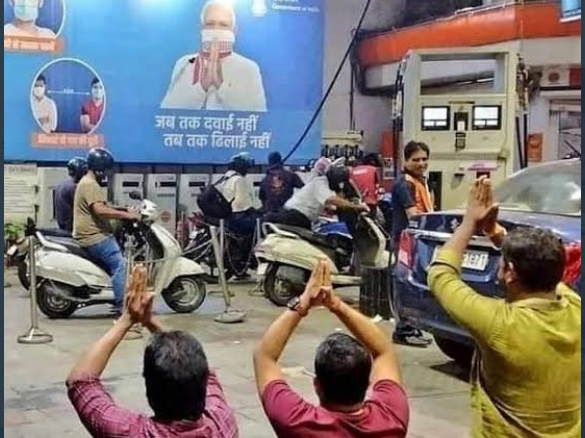 Amid recent hikes in fuel prices, cooking gas, CNG and toll taxes, the prices of over 800 life-saving drugs, including Paracetamol, will go up by more than 10% from April 1 as the government has allowed an increase of over 10% for the scheduled drugs. This means that prices of around 800 drugs under the National List of Essential Medicines (NLEM) will increase by 10.7% beginning from April 1.

This will be the highest price hike on medicine so far.

Apart from paracetamol, the prices of antibiotics like azithromycin, medicines to prevent anemia, vitamin-mineral tablets, medicines for diabetes and cardiac ailments and Covid medicines will also be expensive from the upcoming month of April.

As soon as the news comes out, the tweeple have started trending the hashtag #ModiHaiTohInflationHai with thousands of tweets regarding the hikes in petrol diesel, CNG and toll tax.

As soon as the assembly elections got over, the Modi government is back at its game of oil loot by hiking the prices, a user wrote. For PM Modi human lives never mattered. Only power at all costs matters, another user wrote.

Sharing a picture of PM Modi, a user said in the last 7th years, PM Modi has not only failed but also ruined the country by selling the wealth of India. Ordinary citizens have to suffer the consequences, he wrote in his tweet with a hashtag ModiHaiToInflationHai.

Another user also wrote that PM Modi can blame state governments, wars and pandemics for rising prices, but that does not change the reality on the ground. The poor and the middle class are suffering. Vishwaguru must answer on the INFLATION CRISIS, or the people will!

Took to twitter, the Trinamool Congress tweeted that while India reels under soaring inflation and fuel price hike, Prime Minister Narendra Modi unabashedly turns a blind eye. Together, we will hold PM Modi and his government accountable for the nation’s plight, the TMC further wrote in its tweet.

The state elections are over, BJP is showing its true colours. PM Modi is hell bent on extracting every last penny of the common man’s hard-earned money, just to benefit a select few of his crony friends, a user also wrote.

Despite fall in crude oil prices, the prices of petrol and diesel were hiked once again on Tuesday– the seventh time in eight days – across India. In all, petrol and diesel prices have gone up by Rs 4.80 per litre – the steepest increase in any eight days since the daily price revision was implemented in June 2017.

Bihar Board Class 10th Result 2022 not to be released today, here’s how to download, information

Defence Ministry says armed forces personnel who die on duty not martyrs, so what do we call brave soldiers who stake their lives for our safety?