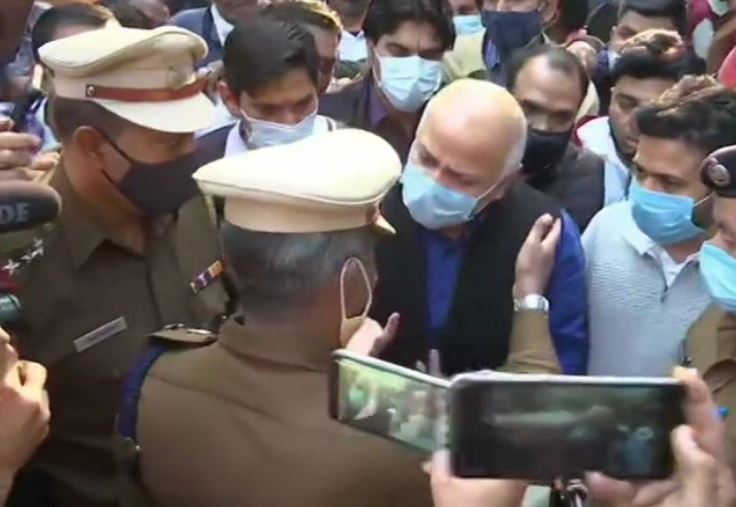 Bharat Bandh ended peacefully all across the country on Tuesday in support of the farmers demand to revoke the three new farm laws. But as is its wont, the Aam Aadmi Party government in Delhi got the most media footage for the supposed arrest of its convener and Delhi Chief Minister Arvind Kejriwal and ending up starving the coverage of the farmers’ stir and the bandh in support of it.

AAP claims the CM is under house arrest. The police denies the claim. I don’t know why but I feel like I’ve seen this script play out somewhere else also. https://t.co/WyBkQJbYCA

The trouble began when AAP MLAs said they were denied permission to meet Kejriwal at his residence. After this, Kejriwal deputy Manish Sisodia and his supporters staged a protest after he said he was stopped from meeting Kejriwal too.

In full media glare, Sisodia asked the Delhi Police personnel deployed if this meant the CM is under house arrest. MLA Saurabh Bharadwaj, who is also said to be under house arrest, said that no one is allowed to enter Kejriwal’s residence and the CM was also not allowed to come out to meet party workers.

Bharadwaj alleged Delhi Police had barricaded Kejriwal’s residence from all sides at the behest of the Home Ministry. Earlier on Monday, Kejriwal had visited the Singhu border and reviewed facilities for the protesting farmers.

Denying AAP’s claim, Delhi Police said the allegations were baseless. They said forces have been deployed outside Kejriwal’s residence but he left his official residence around 8 pm yesterday and returned around 10 pm. Hours later, AAP members tried to break barricades outside Arvind Kejriwal’s house.

Security was tightened at Delhi’s border where thousands of farmers have been camping for the past 11 days. As part of the Bharat Bandh, protesters blocked railway tracks at several places in West Bengal, Maharashtra, Bihar and Odisha. The farmers blocked Ghazipur-Ghaziabad border, while in Punjab’s Mohali, the protesters blocked the Chandigarh highway.

Workers of Opposition parties held demonstrations in several parts of the country. Despite heavy security, a clash erupted in Rajasthan between workers of the BJP and the Congress in Jaipur. The incident took place outside the BJP office.

The Bharat Bandh received widespread support from opposition parties and several other organizations on Tuesday. Trains were cancelled, shops and commercial complexes were closed, roads were blocked and traffic disrupted as protesters demanded a repeal of the Centre’s three farm laws.