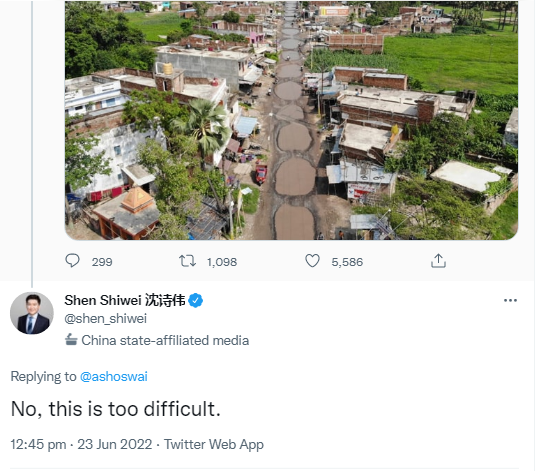 Chinese journalist Shen Shiwei on Thursday mocked the Bihar potholed highway, the images of which are viral, saying China can’t build a road like this. He was replying to a rhetorical question shared by peace and conflict professor Ashok Swain on Twitter.

A picture showing a stretch of road filled with huge potholes is doing rounds on Twitter and other social media. A drone video of the same highway is also being circulated but with different claims.

The picture had been widely shared with a claim that the photo of the potholed highway is from Wayanad, the Lok Sabha constituency of former Congress chief Rahul Gandhi, in Kerala. However, the Tweeple are still asking where is the road?

Several fact check reports revealed that the drone video is of the National Highway 227 passing through Madhubani in Bihar.

Other fact checkers said the picture is at least three years old and claimed it was of NH-80 at Bhagalpur in Bihar.

Around the same time, a Twitter user posted the picture and tagged the then Deputy Chief Minister of Bihar, Tejashwi Yadav.

Responding to the user, Tejashwi had questioned the authenticity of the claim. Later, he tweeted two different images of the same road, the viral picture and another where the potholes were repaired. He captioned the tweet: rumours vs reality that’s how Bihar is defamed, he had wrote in his tweet.

However, this is the condition of main road passing through Kaluahi-Basopatti-Harlakhi that led to inconvenience to commuters. The villagers affected by the condition of highway had earlier told Dainik Bhaskar that the potholes fill up with rainwater during the monsoon.

However, after every rain, there is a problem of mud and dust, which troubles the people. The rainwater also enters houses in low-lying areas, the villagers said.

This road is falling to pieces since 2015 but it has not been reconstructed yet. Tenders have been floated thrice so far for its construction, but all the contractors have abandoned work midway.

SYL Song: Sidhu Moose Wala’s last song is all about Punjab rivers, crosses 1 million views in 30 minutes of its release

Ola set to launch EV cars in India, here’s what to expect