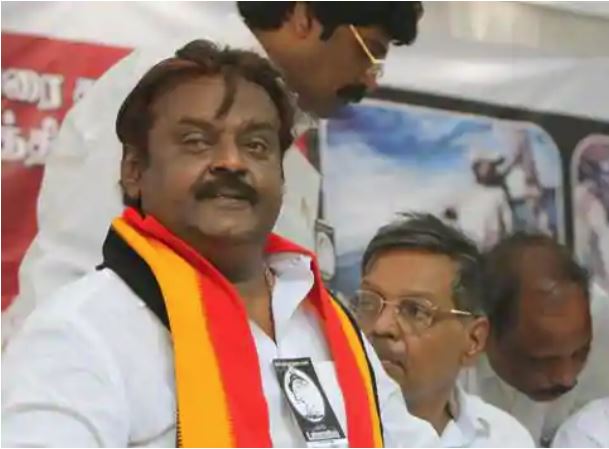 Actor-politician Vijayakanth’s Desiya Murpokku Dravida Kazhagam (DMDK) on Tuesday quit the AIADMK-BJP alliance after three rounds of seat-sharing talks with the AIADMK failed to yield the number of seats it wanted. The Tamil Nadu Assembly elections are to be held on April 6 in a single phase and the results will be out on May 2.

The AIADMK and the BJP had announced their seat-sharing pact last week. The AIADMK allotted 20 seats to the BJP. The 2021 election will be the first Assembly election for the AIADMK after the death of its charismatic leader J. Jayalalithaa. The party had been plastered in the 2019 Lok Sabha elections winning just 1 of the 39 Lok Sabha seats in Tamil Nadu.

Over the last few days, the seat-sharing talks were hanging fire as both parties did not agree on a common ground. The AIADMK, however, was trying very hard to convince the DMDK to stay in the alliance and accept the seats offered; fearing a voteshare headache later.

The AIADMK’s final offer to the DMDK was 13 seats while it was demanding at least 23 seats so that it was on par with the Pattali Makkal Katchi (PMK). The PMK was the first to seal its alliance with the AIADMK and managed to get 23 seats.

For now, the DMDK has either the T.T.V. Dhinakaran-led Amma Makkal Munnetra Kazhagam (AMMK) or the Kamal Haasan-led Makkal Needhi Maiam (MNM) as its options ahead of the election. But the Kamal Haasan party has finalised the seat-sharing with its allies. While the MNM will contest 154 seats, the party has assigned the remaining 80 seats to allies All India Samathuva Makkal Katchi (AISMK) and Indhiya Jananayaka Katchi (IJK).

In 2016 Assembly elections, the AIADMK under Jayalalithaa had won 134 seats. The DMK won 89 seats and the Congress won 8 seats. In 2011, the AIADMK had won 150 seats while the DMDK was in opposition with 29 seats. This was the last election that J. Jayalalithaa and DMK patriarch M. Karunanidhi contested as they both died in 2016 and 2018, respectively.

Among other key challengers in Tamil Nadu, Kamal Haasan’s MNM will face its first state polls. On Monday, the MNM announced contesting on 154 out of 234 assembly seats. Asaduddin Owaisi’s AIMIM has tied up with AMMK and

Among other key challengers in Tamil Nadu, Kamal Haasan’s MNM will face its first state polls. On Monday, the MNM announced contesting on 154 out of 234 assembly seats. Asaduddin Owaisi’s AIMIM has tied up with AMMK and is set to contest 3 assembly seats.

The DMK has allotted 54 seats to its allies, in which, the Congress has got 25 seats, other allies VCK, CPI, CPI(M), MDMK have been allotted 6 each. While the Indian Union Muslim League (IUML) has got 3 seats, Manithaneya Makkal Katchi (MMK) has been give 2 seats.

Quad countries to announce financing for India’s coronavirus : US official