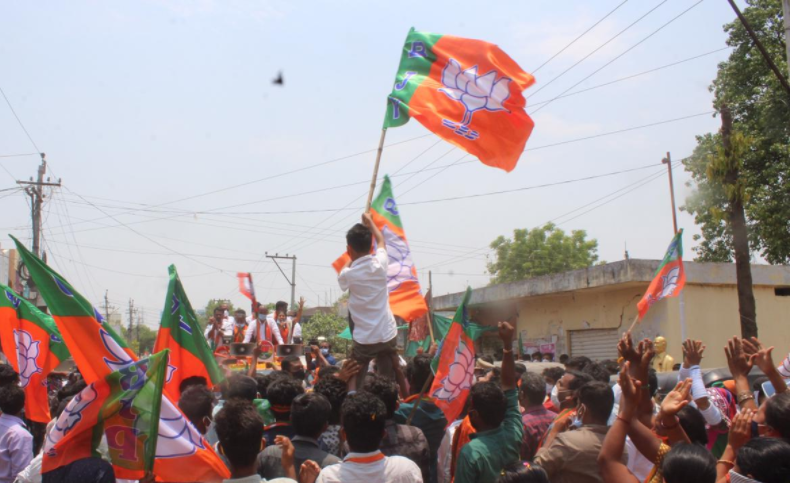 The high hopes of the Samajwadi Party to unseat the Yogi Adityanath-led BJP government seems not to have translated into reality, if we go by exit polls on Monday that screamed that the BJP will return to power albeit with a lower tally than in 2017.

But a big disclaimer: This is what the exit polls say. For the real deal and who got it right and who read a wave in a ripple, we will have to wait a few more days for counting day Thursday, March 10.

The voteshare seems to be predicted to be firmly behind the BJP with a share as high as 45.4%. Some three exit polls have predicted an easy romp home for the BJP, giving it more than 250 seats. This is lower compared to the 312 seats it won in 2017.

The NewsX-Polstrat exit poll says the BJP will win a maximum 225 seats, enough to form a government of its own. The Samajwadi Party seems to be stuck below 160 and the BSP getting a better 14-24 seats.

The Congress is expected to win between 2 and 6 seats. The Republic- P-MARQ exit polls have put the BJP at 240 seats and the SP at 140.

Again, as TV pundits reiterated, it was the Ram factor which seems to have outweighed the anti-incumbency of the Yogi Adityanath government.

Apart from the BJP’s return in Uttar Pradesh, the Aam Aadmi Party is expected to sweep Punjab. Times Now-Veto exit poll says AAP will win 70 seats, Congress 22 seats, SAD+ 19, BJP+ will have 5 seats, and others will have 1 seat. The Axis My India prediction has AAP winning Punjab with 76-90 seats in Punjab. The state has 117 seats.

Others pegged AAP at 55 (India News-MRC) and between 59-67 (India TV-CVoter) and AAP at 54 seats (News 24-Today’s Chanakya). The ABP-Lokniti CSDS exit poll put AAP to get 36-46 seats. The last two projections point to a hung Assembly in Punjab.

In Goa, the Congress seems to be ahead though by a slim margin. Zee News poll said it expected the BJP to win 15 seats. And the Congress+ is likely to get more than 16 seats and others will get 7 seats. The numbers though close leave room for MLA-hopping if push comes to a shove.

The Uttarakhand projections are mixed. With a few polls making it a clean BJP majority, some others credit a Congress return.

Again, these are exit poll projections. March 10 will show who is right and who is not!