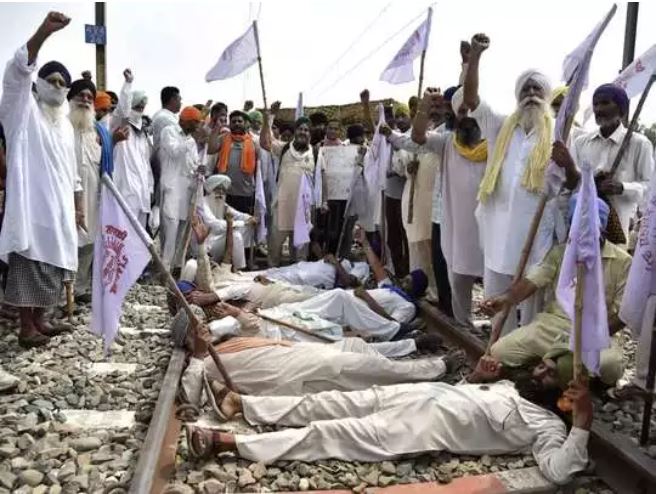 The Bhartiya Kisan Union spokesperson Rakesh Tikait on Wednesday called for nationwide Rail Roko on Thursday from 12 pm to 4 pm across the country.

It has been more than 170 days to the ongoing farmers’ protest against the Centre’s farm laws. The farmers across the country have organised several rallies and meetings to repeal three farm laws.

Tikait told the media that the Central government was not permitting many trains to ply for the last eight months despite the fact that many other restrictions had been removed by the Centre. Due to this people were facing many difficulties.

The BKU spokesperson said people from their villages would be participating in tomorrow’s ‘Rail Roko Andolan’ that has been announced by the Sanyukt Kisan Morcha.

In the wake of the SKM’s announcement, the railway has deployed 20 additional companies of the Railway Protection Special Force (RPSF) across the country, with focus on Punjab, Haryana, West Bengal and Uttar Pradesh.

In solidarity with the protesting farmers at Delhi borders, the Union of Farmer Associations in Karnataka will also take part in the Rail Roko Andolan across the country. The Union has decided to block railway track for three hours across the state.

The Karnataka Rajya Raitha Sangha along with state’s other labour and dalit unions will sit on railway tracks from 12 pm to 3 pm as a mark of protest, demanding the repeal of the three farm laws passed by the Union government. Thousands of members from Mysuru, Bengaluru, Hubbuli, Belgavi will be staging protests at key railway junctions disrupting regular train schedules.

Tikait said that the decision to announce nationwide Rail Roko Andolan have not taken all of a sudden. The decision was taken 15 days back. He said people will be troubled but the farmers have more problems than them. If the movement is peaceful then farmers will win while if there is turmoil, Modi will win, he said.