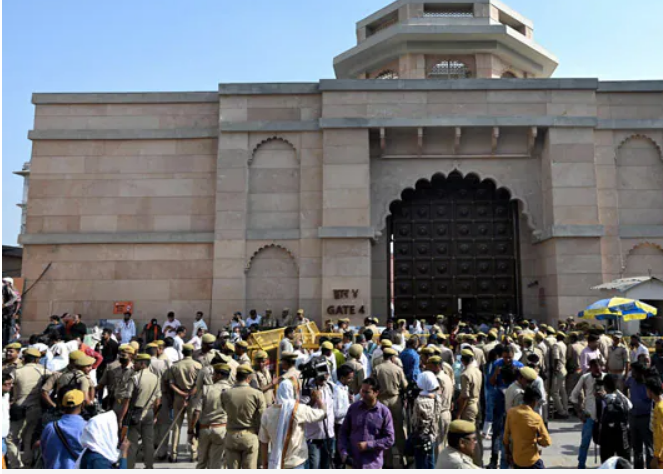 Shortly after a stunning claim by Hindu women petitioners, a Varanasi court on Monday ordered the immediate sealing off of the well in which a Shivling has been found within the Kashi Vishwanath Temple-Gyanvapi Mosque complex in Uttar Pradesh’s Varanasi.

The court also directed the Varanasi District Magistrate to ensure that nobody is allowed to enter the area.

As the third day of the court-ordered videography survey of the Kashi-Gyanvapi complex in Varanasi concluded on Monday, the Hindu petitioner in the case, Sohan Lal Arya claimed that the committee found a Shivling at the complex. The survey has ended a day before the next hearing of the case in court.

Speaking on the survey, UP chief Minister’s deputy Keshav Prasad Maurya said that the news of a shivling being found at Gyanvapi mosque premises is happy news for him and for all shiv followers of the country. The truth has come to light and his party will welcome and follow orders of the court in the matter, he said.

On the last day of the court-mandated videography survey of the mosque complex, a Shivlinga was found at the place where wuzu khana is there.

The application was filed on Monday in the Varanasi court by Advocate Hari Shankar Jain seeking access to pray at a shrine behind the mosque.

The three-day survey of the complex being done by the Commission concluded on Monday at noon, with officials saying that the findings of the survey were confidential.

A lawyer representing the Gyanvapi Mosque had approached the Supreme Court against the videography survey of the Gyanvapi Mosque complex saying it is at odds with the Places of Worship Act, 1991. He had also claimed that nothing unusual was found during the survey.

Gyanvapi masjid row: Advocate says it is not Shivling, it’s a fountain, calls it misleading claim 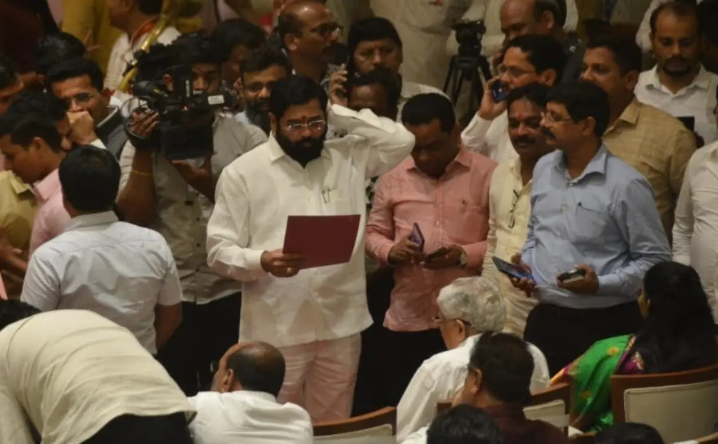 In one of his first big populist move as the new CM, Maharashtra govt led by the Shiv Sena (Eknath Shinde faction) and BJP will be brought down the fuel prices in the state.

Replying to a debate after he won the floor test, Shinde informed the House that a decision to reduce VAT on fuel will be taken in the state cabinet.

Speaking in the assembly after winning the trust vote, Maharashtra’s new Chief Minister Eknath Shinde said he had been suppressed for a long time and the rebellion led by him was a fallout of the unfair treatment meted out to him, an apparent reference to his old association with the Uddhav Thackeray-led Shiv Sena.

Last year in November, the Central government had cut excise duty on petrol and diesel by Rs 5 and 10 on the occassion of Diwali. In May again, as the Centre sliced excise duty, states like Uttar Pradesh reduced VAT further.

Week after taking oath as Maharashtra Chief Minister with Devendra Fadnavis as his deputy, Eknath Shinde has won the show of strength in the state assembly today as 164 MLAs voted for the motion of confidence, while 99 voted against it on the last day of the special session.

Shinde was collapsed the Uddhav Thackeray-led Shiv Sena government saying that he was earlier promised the deputy CM post when the BJP-Shiv Sena alliance was in power. 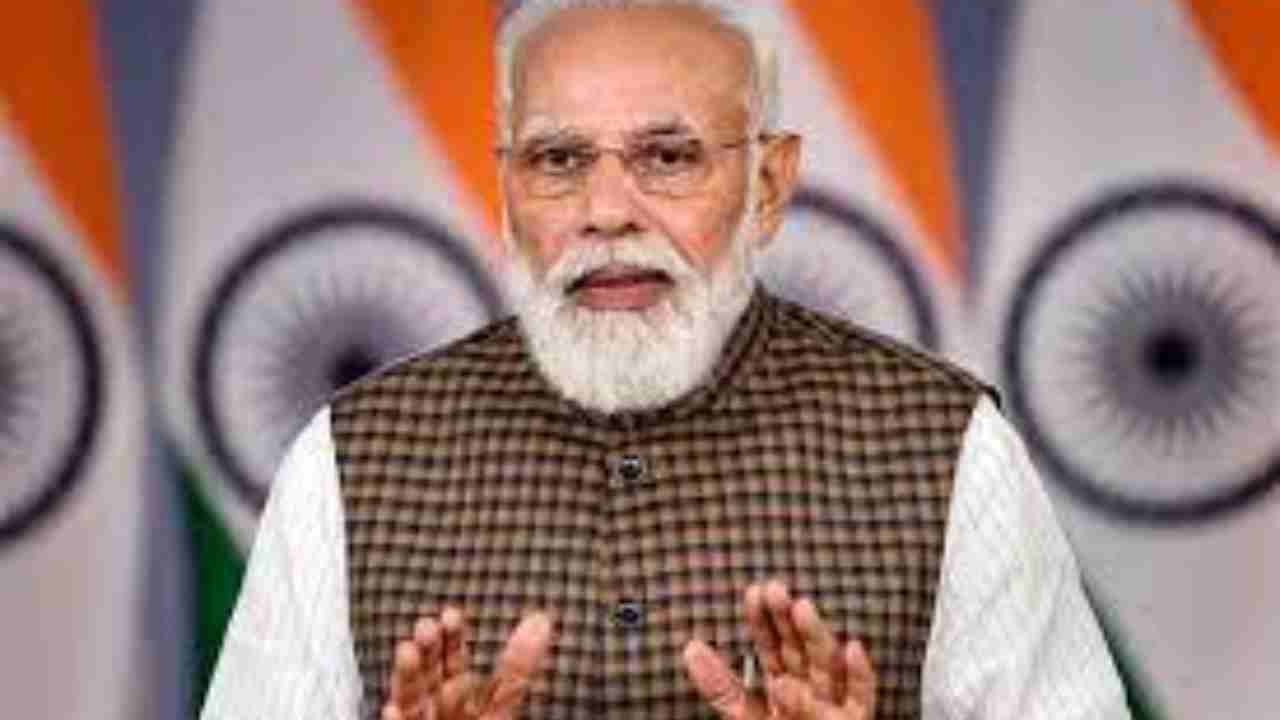 PM Modi was in Vijaywada to attend the national executive meeting and stayed in Hyderabad.

Prime Minister Narendra Modi’s security was compromised on Monday during his Andhra Pradesh visit when black balloons were reportedly spotted flying near PM Modi’s chopper. According to the reports, black balloons were released soon after PM Modi’s chopper took off from the Gannavaram Airport in Vijayawada. PM Modi was in Vijaywada to attend the national executive meeting, and during that time he stayed in Hyderabad.

A video of the same is doing the rounds on the internet. In the video, the Congress workers are seen on a rooftop holding black balloons and placards and chanting “Modi Go Back” slogans. As Modi’s chopper took off, the politicians released the black balloons and were heard laughing and clapping. The chopper can be seen in close proximity to the balloons.

Although there was no damage, this has turned out to be a significant security breach for the Prime Minister. The police have registered the case and the investigation is underway. The police are looking into the identities of these Congress workers as well as how they got inside despite heavy security.

In the latest reports, police have taken 3 Congress protesters into custody for releasing the black balloons while a strict security cordon was set up around the airport, said SP Siddharth Kaushal, Krishna district.

According to The Hans India, Congress leader Rajiv Ratan claimed to have organized the protest against Centres for the non-implementation of promises made during the state’s bifurcation.

Earlier on Sunday, the question was raised on West Bengal’s Chief Minister Mamata Banerjee’s security when the man climbed through her residence’s wall at 1 am on Saturday night, crossed over, and sat throughout the night despite Z+ security cover.

The AAP has an absolute majority in the 70-member house with 62 MLAs while the BJP has eight members in the assembly. 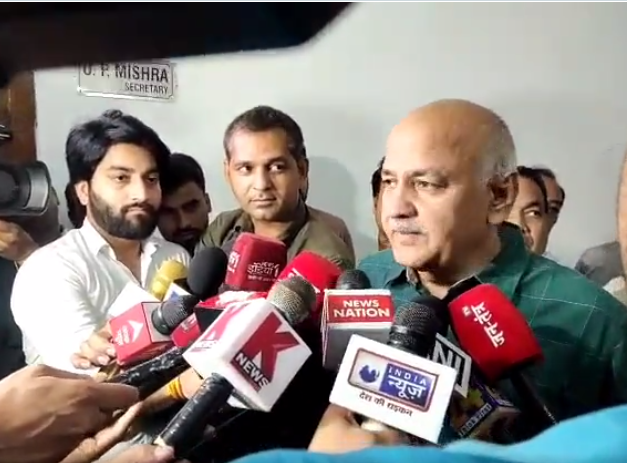 Delhi Assembly on Monday cleared bill to double the salary of its MLAs and Ministers.

With a 66% hike in lawmakers salary, the members of the legislative assembly will be paid Rs 90,000 a month, up from Rs 54,000, once the bill is approved by the president.

Delhi’s law, justice and legislative affairs minister Kailash Gahlot introduced 5 bills to increase the salary and allowances of ministers, speaker, deputy speaker, the leader of opposition, chief whip and the members of the assembly.

The Bill to hike the salary has been introduced on the first day of the special session of the Delhi Legislative Assembly that has been started from today.

Read A also: National Commission for Women seeks action against Akhilesh Yadav for his tweet on Nupur Sharma

Arvind Kejriwal’s deputy Manish Sisodia, who also holds the finance portfolio, said that there has to be rewards to invite talented people into the politics. The corporates get talented pool of people because of the salaries, he also said.

In the first week of May, the Ministry of Home Affairs had signed off on the increase, paving the way for the revision. Last week, the Lieutenant Governor Vinai Kumar Saxena also approved the introduction of these bills in the House.

The ruling Aam Aadmi Party (AAP) has an absolute majority in the 70-member house with 62 MLAs while the BJP has eight members in the assembly.

The assembly secretariat will forward the bills to the department of law, justice and legislative affairs of the Delhi government which will then forward it to the LG’s office from where it will be sent to the President through the home ministry.

During the two-day session, Delhi’s Aam Aadmi Party government is planning to bring a resolution against Centre’s Agnipath scheme that had triggered protests across the country over its contractual nature without pension and other allowance benefits.