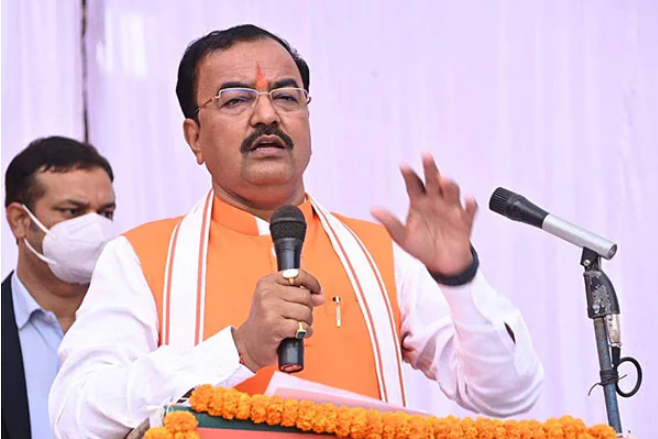 Uttar Pradesh Deputy Chief Minister Keshav Prasad Maurya on Tuesday ended an interview abruptly when a BBC journalist asked him to comment on Muslims genocide call at Haridwar Dharam Sansad which was held in Uttarakhand last year in December.

On a furious questions on hate speeches at the Haridwar Dharma Sansad, Maurya stopped an interview midway and snatched the reporter’s mask. He also forced the crew to delete footage, the BBC said.

In the interview, the journalist asks Maurya about Dharam Sansad oraganised in Haridwar and Raipur and the silence of ruling BJPs top brass, including Prime Minister Narendra Modi and Uttar Pradesh Chief Minister Yogi Adityanath, on hate speeches.

On the question of BJPs silence on the hate speeches at Haridwar and Raipur Dharam Sansad, Maurya replied no such calls were made at the event. To this, the BBC journalist replied that there is video evidence of it. Then Maurya told the BBC journalist to ask questions about elections.

When pressed about genocide calls raised at the Haridwar Dharam Sansad, he replied that he and his party doesn’t know anything about the genocide call video. “You are not talking like a journalist, you are talking like an agent,” the deputy chief minister said and took his microphone off and stopped the interview.

Taking a U-turn on it, Maurya said it was an unfortunate incident.

On the question why only Hindu religious leaders were in the spotlight, Maurya replied that what about comments made by other religious leaders? Dharma Sansad is not a BJP event, it was the religious leaders event. Seers can say what they believe in. This is not related to politics. And there are Muslim and Christian leaders too. Talk about them too, Maurya said.

Maurya also said the part people don’t need to prove themselves as the BJP believes in Sabka Saath, Sabka Vikaas (development and support of all). Religious leaders have the right to express themselves, he said.

Notably such comments have been against the Muslims a few months before assembly polls in Uttar Pradesh, Uttarakhand, Punjab, Manipur and Goa.

The BBC journalist also asked Maurya about the dozens of sedition cases registered over sloganeering during India Pakistan T20 World Cup match. Sedition is a different issue. This is a Dharma Sansad, Maurya replied.