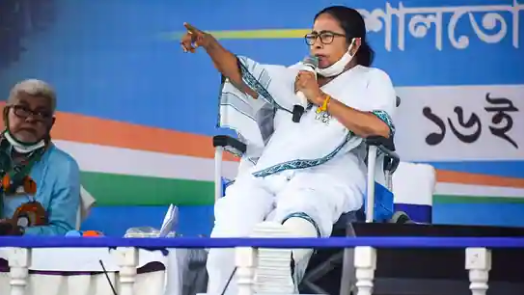 West Bengal Chief Minister Mamata Banerjee on Friday launched an attack on Trinamool Congress rebel MP Suvendu Adhikari, said she had blindly supported Adhikari when he was the part of TMC. Comparing him to Mir Jafar, she said there is no place for Gaddar in the party.  Calling herself a custodian of people’s rights, Banerjee said she would not let anyone harm their interests.

Addressing a public rally at Tamluk area in East Midnapore, Banaerjee said her care towards Adhikari was blind but now the TMC will not tolerate him anymore. In her address, Banerjee claimed that the TMC will not leave an inch to him and to any opposition candidates in any seats in the upcoming West Bengal election.  At the same time, she also claimed that the results of upcoming West Bengal assembly elections 2021 will decide the fate of BJP leaders like Narendra Modi and Amit Shah in 2024 Lok Sabha polls.

Adhikari, a minister in TMC government had walked out of the TMC in December and later joined the BJP.

Assuring the people of the state, Banerjee said her fight against National Register of Citizens (NRC) and National Population Register (NPR) will continue. The party will not allow the Centre to do NRC and NPR in Bengal and will do everything to protect the people of Bengal.

Read Also: Vehicle scrapping policy: Nitin Gadkari says tax breaks to those who trade their old vehicle for new one

Calling youths and students as the future of Bengal, she said that the TMC government has increased the budget three times for education, sports, and culture in her manifesto. She also announced to launch ‘Student Credit Card’ which will have a credit limit of Rs 10 lakh with an interest rate of only 4 per cent, with a provision of easy repayment so that students do not have to depend upon their parents to continue their studies. For farmers’ welfare schemes, the TMC chief said that the party will provide Rs 10,000 per acre/per annum to all small and marginal farmers through ‘Krishak Bandhu’ scheme.

Vehicle scrapping policy: Nitin Gadkari says tax breaks to those who trade their old vehicle for new one